Maternal exposure and subsequent sensitization to fetal blood usually occurs at delivery, but it can occur at any time during pregnancy.

Maternal exposure and subsequent sensitization to fetal blood usually occurs at delivery, but it can occur at any time during pregnancy. In the late 1960s, it was discovered that an antibody to the D antigen of the Rh system could be prepared from donors previously sensitized to the antigen. Administration of the anti-D immune globulin soon after delivery prevents an active antibody response to the D anti-gen by the mother in most cases.

Anti-D immune globulin is effective only for the D antigen of the Rh system. It is not effective in preventing sensitiza-tion to other Rh antigens or any other red cell antigens. 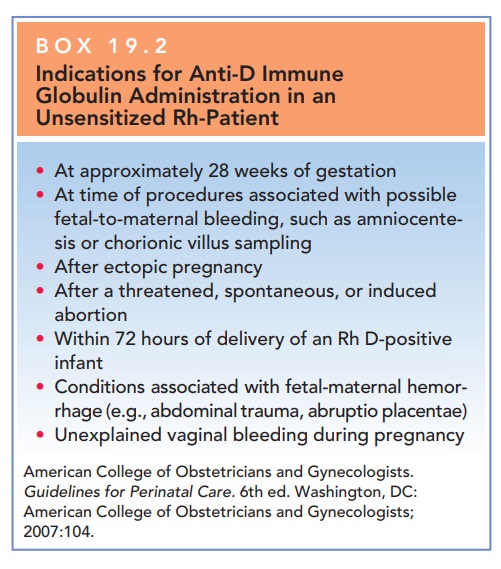 Because even a minute amount of fetal red cells can result in sensitization to the Rh D antigen, in any circumstance when a fetomaternal hemorrhage can occur, a prophylactic dose of 300 μg of anti-D immune globulin should be administered.

Each dose of anti-D immune globulin provides protection against sensitization for up to 30 mL of fetal blood or 15 mL of fetal red blood cells.

In cases of trauma or bleeding during pregnancy in which there is a potential for more than a 30-mL fetomaternal trans-fusion, the extent of the fetomaternal hemorrhage can be assessed using the Kleihauer-Betke test. This test identifies fetalerythrocytes in the maternal circulation. The number of fetal cells as a proportion of the total cells can be deter-mined and the volume of fetomaternal hemorrhage can be estimated. Based on this estimation, the appropriate dose of Rh immune globulin can be determined. An indirect Coombs test can also be used to determine if the patient has received sufficient antibody. A positive test indicates that she has received an adequate dose.

At approximately 28 weeks of gestation

At time of procedures associated with possible fetal-to-maternal bleeding, such as amniocente-sis or chorionic villus sampling

After a threatened, spontaneous, or induced abortion

Within 72 hours of delivery of an Rh D-positive infant