Clinicians need to be able to diagnose cardiovascular problems and to monitor their treatment. Obviously, noninvasive methods are to be preferred as far as possible for the comfort of the patient.

The spread of depolarization and repolarization through the muscle mass of the heart is accompanied by measurable electrical potentials, which may be recorded through electrodes placed on the skin. The record of these potentials is called an electrocardiogram (ECG) and represents the aggregate or resultant electrical activity associated with the action potentials of millions of individual cells, each of which has an amplitude and direction. Recording a patient’s ECG is a way of investigating the electrical activity of the heart and when the pattern is abnormal it is invaluable in diagnosing a variety of heart complaints. The test is quick, simple and painless, and provides information on the heart rhythm and underlying cardiac morphology.

An ECG is recorded by placing electrodes, these days usually disposable, self-adhesive ones, on the chest and limbs. In practice the ECG is recorded simultaneously from six electrodes connected to the limbs and six to the chest that measure the direction and flow of electric currents during each heartbeat. The results are recorded (Figure 14.11 (A)), with each trace representing a particular ‘view’ of the heart’s electrical activity; these views are referred to as leads. The spikes and troughs on the graph correspond to specific events in the cycle of a heartbeat and these are lettered alphabetically (Figure 14.11 (B)). Modern ECG instruments have a built-in computer that analyzes therecordings and produces a printout of the analysis. 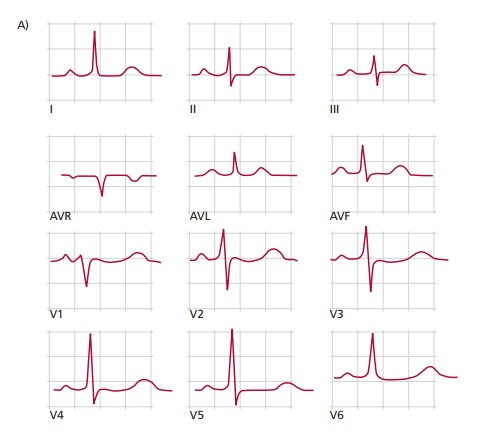 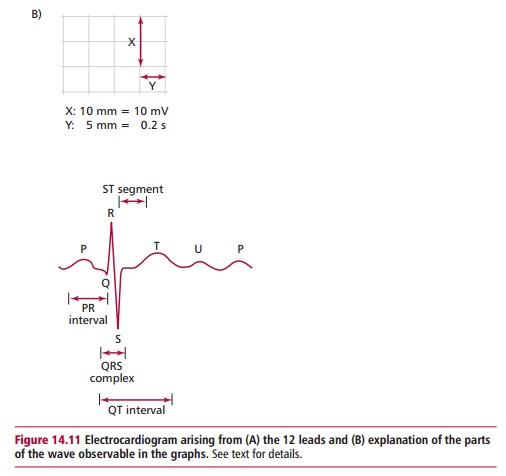 The print out from an ECG examination can help the cardiologist to identify a number of heart problems including abnormal rhythms, inadequate blood supply to the heart and excessive thickening of the heart muscle (hypertrophy). For example, a heightened P wave indicates an enlarged atrium; a deeper than normal Q wave may indicate a myocardial infarction and a heightened R wave usually indicates a thickening of the ventricular wall. If the ST segment is raised above the horizontal it may indicate acute myocardial infarction or, if it is below the horizontal, it can imply high blood K+ concentrations or cardiac ischemia. Any deviation from the normal rate or sequence of the ECG is referred to as a cardiac arrhythmia. If the sinoatrial (SA) node is damaged the heart rate may slow to 40–50 beats per min and if damage occurs to both the SA and AV nodes it may fall to 20–40 beats per min and the patient will require a pacemaker.

In addition to the basic technique, the cardiac response may be recorded during exercise as the patient walks or runs on a treadmill and this can give further clinical information. In other situations, the ECG may be recorded over 24 h using a portable ECG machine to monitor intermittent arrhythmias.

Echocardiography uses high-frequency ultrasound to map the heart and study its various functions. It is one of the most widely used diagnostic techniques, is painless and does not use X-rays and can indicate the extent of cardiac damage. Ultrasound waves from a probe at wavelengths of 1 mm or less (corresponding to frequencies of around 2 MHz) are generated in short bursts of a few microseconds. When the probe is pressed against the body the emitted pulses encounter the interfaces between the various body tissues. In crossing each interface some sound energy is reflected and is detected by a transducer in the probe and recorded as an echo. The time delays for the echoes to return are analyzed by a computer to produce a video picture on a screen with a moving image of the heart and blood vessels (Figure 14.12). This allows the cardiologist to see if the heart valves are functioning properly, for example whether they leak when closed and if blood is flowing normally. Abnormal connections between blood vessels of heart chambers are also revealed, as well as contractibility of muscle walls. 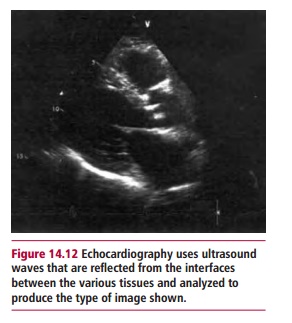 Cardiac catheterization is a further method for investigating heart function and abnormalities. However, it is an invasive technique and involves a certain amount of discomfort for the patient. Under local anesthetic, a thin plastic tube is inserted into a vein or artery in an arm or leg (groin) and advanced into the major vessels and heart chambers. The catheter can be used to measure pressure, take a view of the inside of the heart or to take blood samples to measure oxygen and lactate concentrations. Dyes which are X-ray opaque can be injected into the catheter allowing moving X-ray pictures to be made that can show up anatomical abnormalities or abnormal blood flow. The coronary arteries can also be investigated by catheterization to check for coronary artery disease.

A chest X-ray taken from the back also enables the size of the heart in relation to the lungs and the major blood vessels to be assessed. It may also reveal areas of calcium deposition, which are a sign of tissue damage and death.

The exercise stress test measures oxygen uptake, CO2 production, heart rate and lung ventilation during progressively more strenuous treadmill or cycle ergometer exercises. It can detect lung and heart diseases in their early stage and also be used to assess fitness. Patients with lung disease stop exercising before achieving their maximal predicted heart rate. Also, their levels of ventilation are disproportionately high for a given oxygen uptake. Thus the more expensive and complicated equipment can differentiate breathlessness due to lung or to heart disease. For patients who cannot physically exercise, stress test measurements can be obtained using the dobutamine stress test. Dobutamine is an inotropic drug that increases the heart rate, hence giving increasing doses makes the heart work harder.