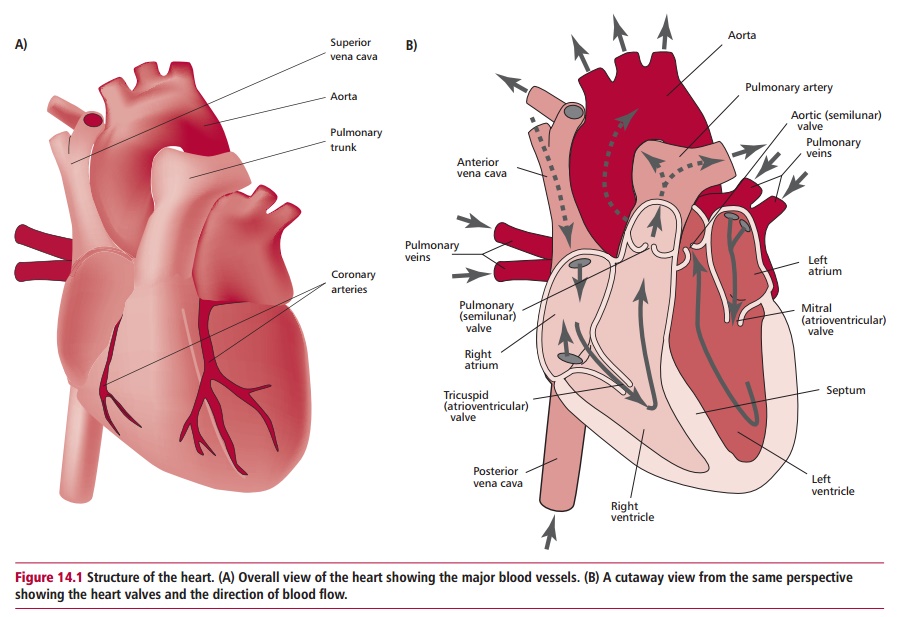 The heart (Figure 14.1 (A) and (B)) is a hollow, four-chambered, muscular organ situated approximately in the center of the chest.

THE HEART AND CIRCULATORY SYSTEMS

The heart (Figure 14.1 (A) and (B)) is a hollow, four-chambered, muscular organ situated approximately in the center of the chest. A smooth layer called the endocardium lines the inside of the chambers. The wall of the heart or myocardium is rich in cardiac muscle tissue arranged into three layers. Theinner layer is circular and thicker in the wall of the left ventricle than in the right. The outer layers of muscle spiral around the ventricles and extend to the fibrous attachments of the four valve rings. On contraction they tend to pull the chamber of the ventricle towards the valve rings. The exterior of the heart is a tough, fibrous layer that is partly covered by fat. The heart is enclosed by a double membrane system called the pericardium. 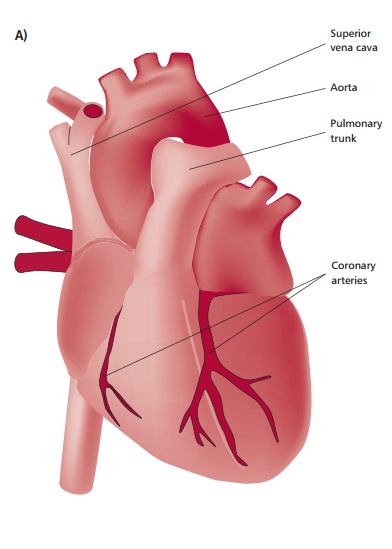 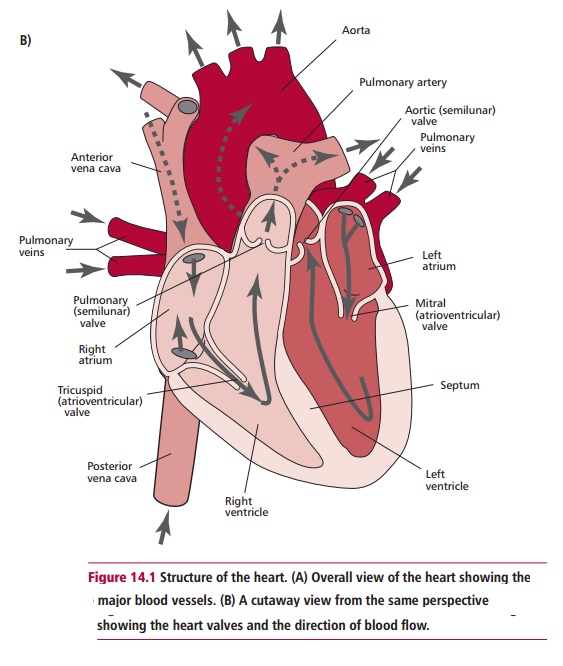 Internally, the heart is centrally divided by a septum that prevents oxygenated and deoxygenated blood from mixing. Each side is subdivided into an upper chamber or atrium, which collects blood and passes it to a lower chamber or ventricle that ejects blood. Each of the heart’s ventricles has a one-way inletvalve and a one-way outlet valve (Figure 14.1 (B)). The tricuspid valve opens from the right atrium to the right ventricle and the pulmonary valve opens from this ventricle into the pulmonary arteries. The mitral valve separates the left atrium and ventricle and the aortic valve opens from the ventricle into the aorta. All these valves ensure that blood flows only in one direction.

The flow of blood through the pulmonary and systemic circulations is illustrated in Figure 14.2. Oxygen-depleted blood from the body flows through the two largest veins, the venae cavae, into the right atrium. When this chamber is full it propels the blood into the right ventricle and when this is full it pumps blood through the pulmonary valve into the pulmonary artery, which takes it to the lungs. As the blood flows through the network of capillaries that surround the lung alveoli it absorbs oxygen and gives up its carbon dioxide . The resulting oxygen-enriched blood flows through the pulmonary veins into the left atrium of the heart. The complete circuit between the right side of the heart, the lungs and the left atrium is called the pulmonary circulation. When the left atrium is full, it sends the oxygen-rich blood into the left ventricle, which, in turn, propels the blood into the aorta, which is the largest artery in the body. From there it flows to all the tissues of the body, with the exception of the lungs, in the systemiccirculation. The major arteries to the head, neck and arms branch off fromthe aorta and there are also smaller vessels, the coronary arteries that supply the heart itself with blood. The aorta arches over the 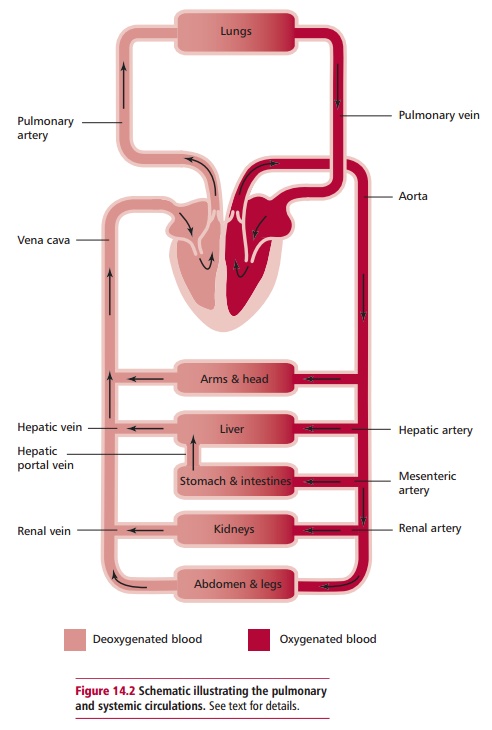 heart and then goes downwards carrying blood to the abdomen and legs. In the capillaries of the tissues, oxygen is exchanged for carbon dioxide and nutrients and hormones, for example, supplied to the tissues. The blood then returns to the heart through the veins (Figure 14.2). 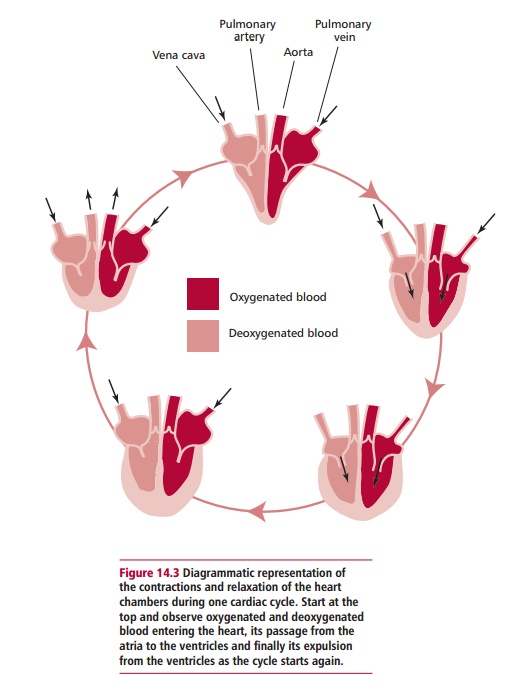 To work efficiently, the four chambers of the heart must beat in a coordinated way, with the atria and then the ventricles contracting simultaneously (Figure14.3). A given chamber of the heart contracts when an electrical impulse movesacross it. Each signal originates in a small bundle of specialized cells in the right atrium called the sinoatrial or SA node (Figure 14.4). This is the natural pacemaker that ensures the heart beats regularly by generating impulsesat a given rate. Although it produces a natural rate, this can be modified by emotional and physical reactions and by hormones, especially adrenaline and noradrenaline , which speed up the heart rate, enabling it to respond to varying demands. The electrical impulses generated by the SA node travel throughout the right and left atria causing the heart muscle to contract (Figure 14.4) and arrive at the atrioventricular or AV node situated between the atria and the ventricles. This node delays the transmission of the impulse to allow the atria to contract completely and the ventricles to fill with as much blood as possible. The phase of relaxation of the ventricles is called diastole. After passing through the AV node, the impulse travels throughthe bundle of His. This is a group of modified cardiac muscle fibers, called Purkinje fibers, that divides into two branches that serves the left and rightventricles respectively (Figure 14.4). The fibers spread over the surface of the ventricles in an orderly arrangement and thus initiate systole or ventricular 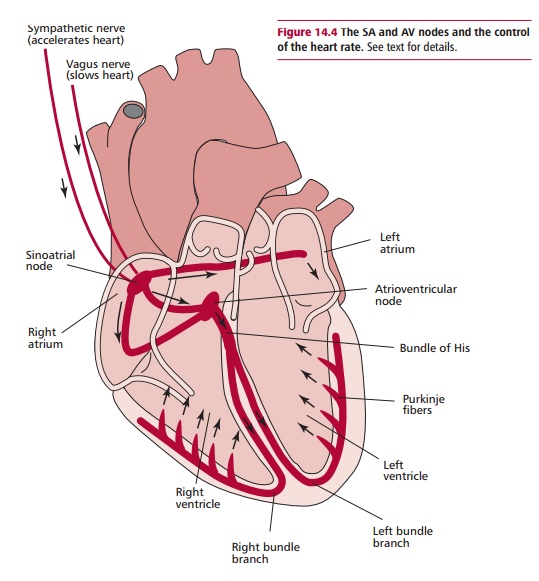 contraction. Both ventricles contract together in a wringing fashion so that blood is squeezed out from their bases, pumping blood from the heart. These coordinated actions keep the four chambers of the heart working in the appropriate sequence. When things go wrong people may have to have artificial pacemakers fitted.

The pericardium is a thin, flexible, two-layered bag that surrounds the heart. It contains just sufficient lubricating fluid between the two layers so that they slide easily over each other as the heart beats. It keeps the heart in position and prevents it overfilling with blood.