The blood vessels comprise arteries, arterioles, capillaries, venules and veins (Figures 14.5 and 14.6). Arteries are strong and flexible and carry blood away from the heart. They are subjected to the highest pressure, and their resilience helps to maintain blood pressure while the heart is in between 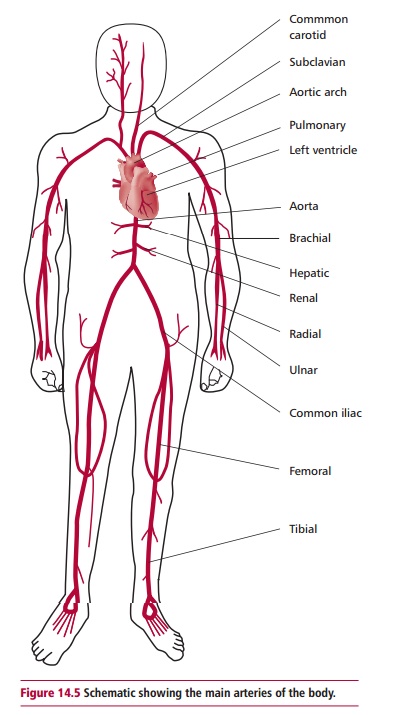 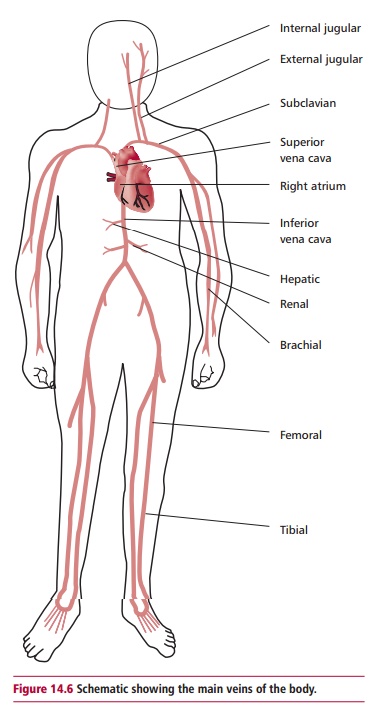 beats. The smaller arteries and arterioles have muscular walls and their diameters can be adjusted to regulate blood flow to a particular region of the body. Capillaries are thin-walled vessels that allow oxygen, nutrients and other materials, for example hormones, to diffuse from the blood to the tissues and waste products to pass from the tissues into the blood. The capillaries are links between the arteries and arterioles and the venules and veins. Veins are, in general, larger in diameter than arteries but have much thinner walls. They transport blood back to the heart but at much lower pressures and speeds than is found in arteries.

Arteries are elastic tubes with circular cross-sections (Figures 14.7 (A) and (B)). They are built up from three layers called tunics. The tunica intima is the layer of endothelial cells that provides a smooth, low friction innermostsurface. 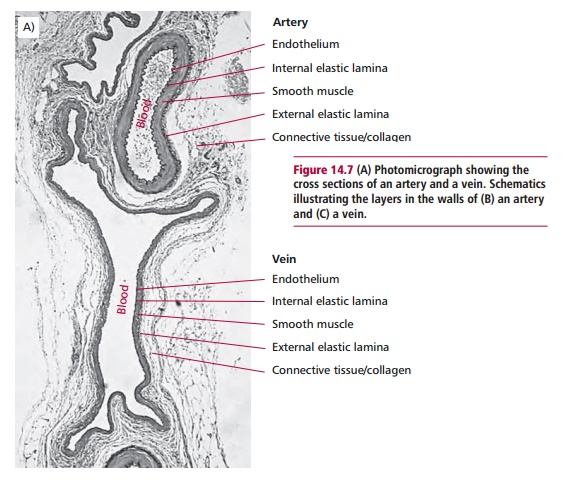 This layer is in direct contact with the blood, and damage to it leads to serious clinical problems. The tunica media is a relatively thick middle layer composed of smooth muscle and elastic fibers, which are arranged both lengthways and circumferentially. The amount of elastic material varies with the vessel. Closer to the heart, the aorta and large branches contain larger amounts because they have to accommodate the stroke volume. In contrast, the pulmonary artery has rather thin walls. The smooth muscle is under autonomic nervous control that regulates the diameter of the vessel. The fibrous components limit the amount of stretch under a surge of pressure. The tunica adventitia is the outer covering fibrous layer composed of tough collagenous material.

Arteries branch repeatedly in order to supply all parts of the body. The diameter of the aorta is about 25 mm, and that of a medium-sized artery about 4 mm.

When their diameter is less than 0.1 mm, they are called arterioles. Junctions between the branches are called anastomoses and these may occur between arteries and arterioles.

The pulmonary arteries distribute the output of the right ventricle to the lungs. They are shorter, have thinner walls and contain blood at a lower pressure than systemic arteries. Arteries also have a storage function since the output of the ventricles is discontinuous as the heart beats. For example, the aorta stores up blood during systole and its elastic recoil propels it on during diastole. This means that the discontinuous blood flow from the heart is converted to a more continuous flow through the peripheral circulation, conserving energy and reducing the pressure that the smaller arteries have to withstand.

The veins form a blood collecting system that returns blood from the periphery to the heart. In general, veins have the same pattern of distribution as the arteries and frequently run alongside them (Figure 14.6). The blood collected from the systemic circuit is eventually delivered to the right atrium of the heart. However, the venous drainage from the stomach, spleen and intestine is carried by the hepatic portal vein to the liver . Blood from the liver is then returned to the heart in the hepatic vein. 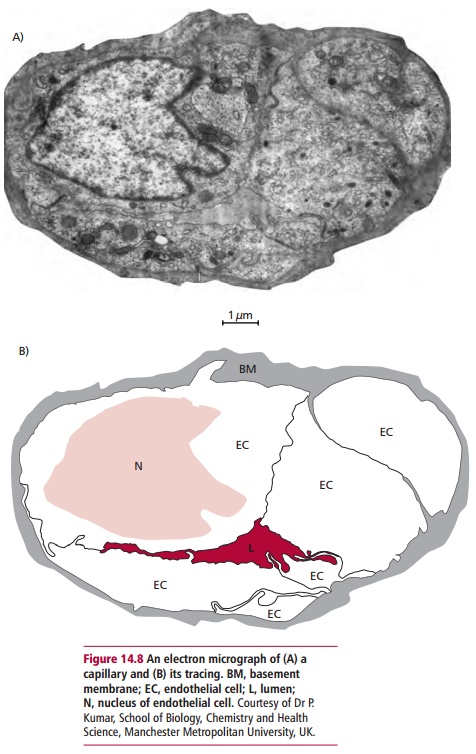 Veins, like arteries, have walls composed of three layers but they contain considerably less muscle and elastic tissues and their walls are much thinner (Figure 14.7 (A) and (C)). The internal lining is the same endothelium as in the arteries. Veins are much more easily distended than arteries and are also more easily collapsed because they are less able to withstand high pressures. At intervals, especially along the lengths of long veins, the endothelial lining forms cup-shaped valves, rather similar to the semilunar valves in the heart. These allow blood to flow in only one direction, which is back towards the heart, and also prevent its back flow under gravity. In addition, during muscular activity especially in the legs, the compression and relaxation of the muscular tissue surrounding the veins forms a ‘muscle pump’ that expedites the transport of blood back to the heart. In general, the blood flow through veins is less discontinuous than it is in arteries.

The arterioles supply beds of capillaries found deep in the tissues and these eventually deliver their blood to the venules, and hence to the veins for return to the heart. Capillaries have internal diameters about the same as that of erythrocytes, about 7 Lm.Their walls are composed of a single layer of endothelial cells on a basement membrane (Figure 14.8) and so they lack muscle and elastic tissues. The capillary network is the site where gases are exchanged, nutrients and other biomolecules are delivered and waste products removed. The flow of blood through capillaries is relatively slow compared with that in arteries and veins and this allows adequate exchanges to take place.