Disorders of Arteries and Veins

DISORDERS OF ARTERIES AND VEINS

A number of clinical disorders are associated with arteries and veins. These include peripheral arterial disease, arterial aneurysms and dissections, strokes, varicose veins and deep vein thromboses.

Peripheral arterial disease can affect the abdominal aorta and its major branches including the arteries to the legs. Obstruction can be sudden or gradual. Most patients with peripheral arterial disease have atherosclerosis that gradually narrows the arteries. Partial occlusion can also result from a blood clot resulting in a sudden decrease in the oxygen supply. A sudden, complete obstruction normally results from a clot lodging in a narrowed artery. Emergency surgery or the use of thrombolytic drugs may be needed to remove the obstruction.

An aneurysm is a round or tube-like bulge that usually develops in weak areas of an arterial wall. There are many reasons for the development of aneurysms, but high blood pressure and cigarette smoking increase the risks. Also, a blood clot may form in the aneurysm. If an aneurysm occurs in the aorta, an aortic aneurysm, rupture, hemorrhage and separation of the layers of the wall (called dissection, see below) can occur with disastrous results. Such conditions can be immediately fatal although most take years to develop. Aortic aneurysm can develop anywhere along its length but over 70% of them occur in the segment that run through the abdomen. An individual with abdominal aortic aneurysm usually becomes aware of a pulsing sensation in the abdomen, with a deep penetrating pain mainly in the back. The aneurysm may rupture, with severe internal bleeding, and the patient will typically go into severe shock. Aortic rupture is frequently fatal. The treatment of ruptured aneurysms involves surgical repair, which is extremely risky. However, many patients are diagnosed early during a routine examination, and then surgery to insert a synthetic graft can be used to repair the aneurysm with a good chance of success.

In an aortic dissection the inner lining of the vessel wall tears allowing blood to surge through the tear, splitting the middle layer and creating a new channel. The condition usually results from a deterioration of the arterial wall caused, in most cases, by high blood pressure, but it can also be a consequence of certain hereditary conditions. The clinical picture includes stroke, heart attack, sudden abdominal pain, nerve damage and an inability to move a limb. Treatment in intensive care is required. Drugs are given to reduce the heart rate and lower the blood pressure. Thereafter a decision needs to be taken as to whether to carry out surgery to replace the portion of damaged blood vessel with a synthetic graft. Untreated, about 75% of patients die within two weeks, but following treatment several years of life are possible in the majority of cases even though the death rate from surgery is 15% or more.

If the blood supply to the brain is disrupted for any length of time the brain cells can be permanently damaged or die due to the lack of oxygen and this is called acerebrovascular accident (CVA) or stroke (Figure 14.17). Brain cells are also damaged if bleeding into the brain occurs. Therefore strokes can be either ischemic or hemorrhagic. In ischemic stroke the blood supply to part of the brain is cut off either because of atherosclerosis or a clot blocking a blood vessel. In hemorrhagic stroke, a blood vessel bursts, preventing normal flow of blood and allowing it to leak into an area of the brain and destroy it. 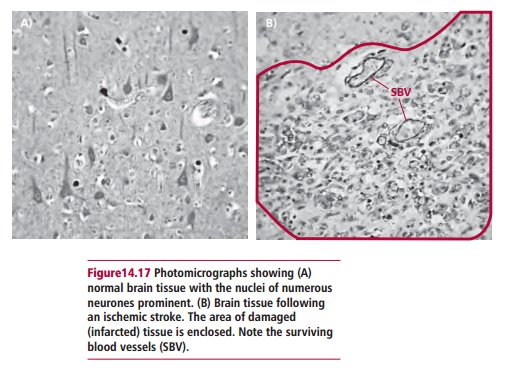 In the developed world, strokes are the most common cause of disabling neurological damage resulting, typically, in a loss of speech and/or loss of motor function on one side of the body. High blood pressure and atherosclerosis are the major risk factors. The incidence is falling because the importance of controlling high blood pressure and dealing with inappropriate blood cholesterol levels has been recognized. Clinicians can usually diagnose a stroke from the clinical history of events and a physical examination. Computerized tomography scans and MRI are used for differential diagnoses.

Many people who have had a stroke recover some or all of their normal functions but others may be mentally and physically devastated, unable to speak or move normally. About 20% of people who have had a stroke die in hospital and the older the patient the greater the risk of this happening. Since each area of the brain is served by specific blood vessels, the area where the cerebrovascular accident occurs decides which part of the body becomes disabled. The loss of function is greatest just after the stroke and some function may return subsequently. This is because although some brain cells die, others may recover and take over a given function at least partially. The immediate treatment is to give oxygen to try to prevent further damage. Anticoagulants may be given if the stroke is ischemic but these are of little use once the stroke is completed. Surgery is not normally of much use since the brain cells are already dead. For the survivors, a long period of rehabilitation may be required.

Varicose veins are enlarged superficial veins, which occur particularly in the legs (Figure 14.18). The cause(s) of this condition is(are) not precisely known, but is probably due to a weakness in the walls of the veins which may be inherited. Over time, the veins lose their elasticity and they stretch and become wider. They may take on a tortuous, snake-like appearance, and cause bulges in the skin over them. The widening causes the valve cusps to separate (Figure14.19) and as a result the veins fill with blood when the person stands and theveins bulge even more. As well as being unsightly, the legs feel tired and the veins ache, and after removing socks or stockings the legs may itch. There may be other complications and minor injuries may cause an ulcer that fails to heal. Varicose veins are common during pregnancy but these usually improve during the two to three weeks following delivery. Hypertension and obesity may have parts to play in the propensity for varicose veins. 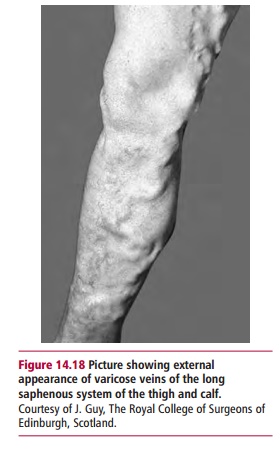 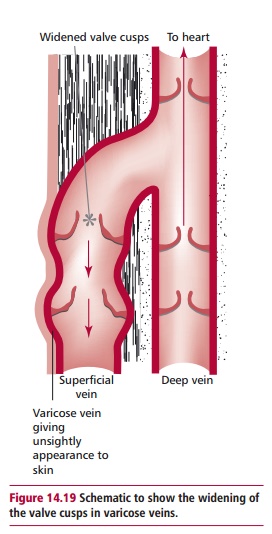 Varicose veins cannot be cured, but the symptoms may be relieved in various ways. Elevating the legs on a stool when sitting down and wearing elasticated stockings compress the veins and prevent them hurting, but these are not cures. They may be treated surgically by either stripping or by injection therapy. Stripping involves removing as many of the varicose veins as possible. The superficial veins play a less important role than the deep veins in returning blood to the heart and their removal does not impair the circulation significantly. Two incisions are made; one in the groin and one at the ankle while the patient is under general anesthetic. The saphenous vein (Figure 14.13) is then removed by threading a flexible wire through the vein, which is pulled to remove the entire vein. However, surgery does not remove the tendency to develop new varicose veins. Injection therapy involves sealing the veins by injecting an irritant solution that causes a thrombus to form so that no blood flows. Healing of the thrombus causes scar tissue, which can block the vein. However, the thrombus may dissolve allowing the vein to re-open. Injection therapy was popular but has fallen into disrepute, probably because of poor techniques with resulting complications. The more modern techniques, if carried out carefully, seem to be successful.

Deep vein thrombosis is blood clotting in the deep veins. Like varicose veins, they primarily affect the legs. They are potentially dangerous. All or part of the clot or thrombus can break loose and lodge in a narrow artery in the lung obstructing blood flow, causing a pulmonary embolism. In serious cases this can result in blockage of all or nearly all of the blood travelling from the right side of the heart to the lungs rapidly causing death. Such serious consequences are not common but it is impossible to predict what will happen once a thrombus has formed. It is believed that the possible causes of this condition are an increased tendency of the blood to clot, which can happen with some cancers and very occasionally with oral contraceptives; slowing of the blood movement in the veins, as may also occur in prolonged bed rest or, sitting on a long flight and some types of injury or major surgery. The condition is difficult to diagnose until the thrombus moves. Deep vein thrombosis may be prevented to some extent by flexing and extending the ankles from time to time and by wearing elastic stockings. Anticoagulant therapy may also be appropriate in some cases.