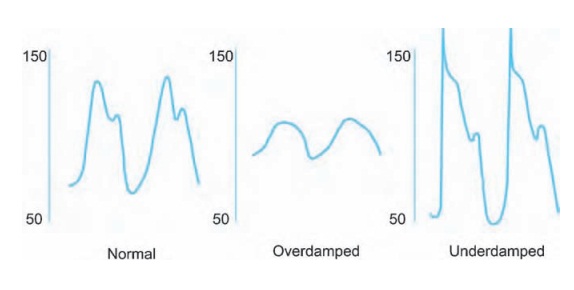 Before inserting a catheter into a radial (rarely the ulnar) artery, many clinicians like to check the patency of the volar arterial arch that connects radial and ulnar arteries. In the so-called Allen’s test, the hand is blanched, both arteries occluded by external pressure, then one occluded artery is freed. If now the entire hand, rather than the vascular bed of just one artery, turns pink, we accept the idea that the volar arch is patent and should one artery become obstructed by a clot or through damage to the intima, the other artery will prevent necrosis of fingers.

For this and all other invasive pressure measurements, we use saline or heparin-filled non-compressible (pressure) tubing connected to a transducer, which con-verts the pressure waveform into an electrical signal. We need to make sure that the instrument is properly calibrated and that the zero level (open to air) is at the level of the heart. Two problems can cause the system to report faulty systolic and diastolic – but usually correct mean – pressures. When the signal is damped, for example owing to an air bubble somewhere in the tubing, the systolic pressure will read falsely low, and the diastolic pressure falsely high. When the system is not damped enough, it might ring (like a bouncing spring), now reporting falsely high systolic (and low diastolic) pressures (see Fig. 7.7).

Arterial catheters give ready access to arterial blood and thus to an analysis of blood gases. When drawing arterial blood for analysis, be sure you are not diluting the blood and that you have the analysis performed without delay so that the normal metabolism of the cells does not affect the results.

If we assume a normal ventricular compliance (pressure–volume rela-tionship), we now have an indication of the end-diastolic volume or preload. However, because of its intrathoracic location, the central venous catheter also records pressures in the thorax as a whole, and thus, CVP fluctuates with venti-lation. In a spontaneously breathing patient, normal pressures might range from −2 to +6 cm H2O. If we then mechanically ventilate that patient’s lungs, pressuresof +4 to +12 (or more with high peak inspiratory pressures) can be expected – this without changing his intravascular volume and, in fact, likely lowering his preload as venous return is hampered by high intrathoracic pressure. The shape of the CVP waveform reflects the cardiac cycle (Fig. 7.8) and may suggest conditions that limit the extrapolation of preload from CVP, such as tricuspid valve disease or a poorly compliant ventricle. As with all monitors, when interpreting CVP data we must consider the clinical scenario and look more at trends in a given patient than the actual values.

Once the catheter is properly positioned, best in an area where the balance between blood flow and ventilation favors flow (below the level of the left atrium or zone III according to West),3 the cuff can be inflated, blocking the vessel so that the tip of the catheter no longer senses PA pressure. Instead, it now looks down-stream and registers pressures submitted retrograde from the left atrium. This pulmonary artery occlusion or wedge pressure helps to identify situations affect-ing left ventricular preload. However, as with the CVP, many factors can influence the readings, e.g., mitral valve disease, pulmonary hypertension. Normal data appear in Table 7.3.

We can also monitor the oxygen saturation of central venous blood either intermittently by drawing samples for the laboratory, or continuously by incor-porating an oximeter in the catheter. When oxygen content of arterial blood and oxygen consumption are constant, a drop in venous oxygen saturation indicates a decrease in tissue blood flow, i.e., cardiac output. 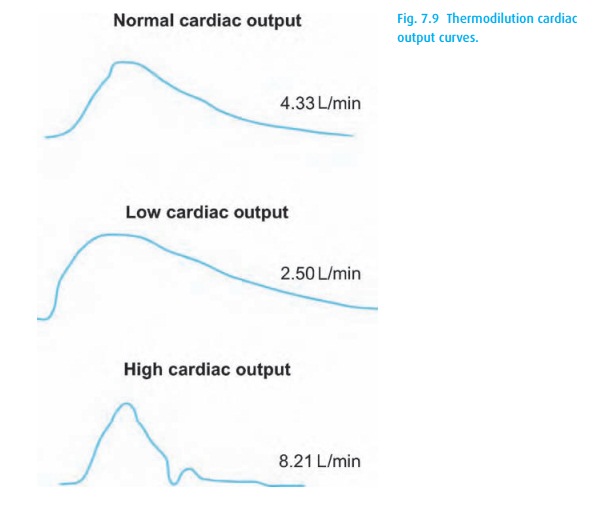 PA catheters have come under much criticism because they may not reveal as much as originally hoped for, and they are highly invasive and saddled with a measurable rate of sometimes life-threatening complications including but not limited to dysrhythmias, thrombosis, infection, and devastating pulmonary artery rupture.4 Much less invasively, transesophageal echocardiography offers a great advantage over the PA catheter. PA catheters generate pressure and flow data; TEE shows volumes and function of all four chambers and valves.

Thus we have many monitors at our disposal (Table 7.4), with new ones arriving regularly. Each has strengths, weaknesses, risks, and potential benefits. No moni-tor is therapeutic in itself but requires the skill and vigilance of a trained observer to interpret the information in the context of the ever-changing clinical picture. 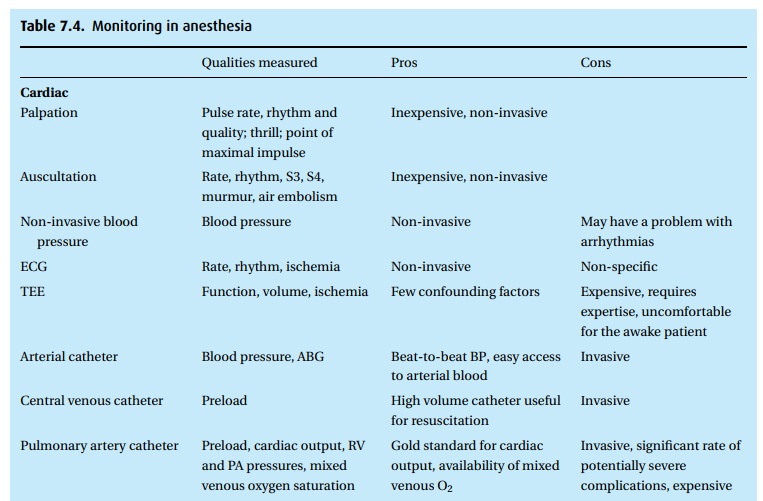 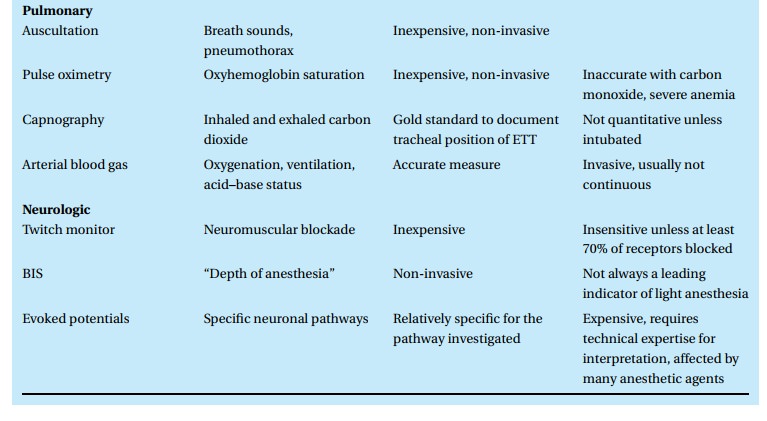