In order to do code optimization and a good job of code generation , compiler needs to collect information about the program as a whole and to distribute this information to each block in the flow graph.

In order to do code optimization and a good job of code generation , compiler needs to collect information about the program as a whole and to distribute this information to each block in the flow graph. A compiler could take advantage of “reaching definitions” , such as knowing

where a variable like debug was last defined before reaching a given block, in order to perform transformations are just a few examples of data-flow information that an optimizing compiler collects by a process known as data-flow analysis.

Data-flow information can be collected by setting up and solving systems of equations of the form :

This equation can be read as “ the information at the end of a statement is either generated within the statement , or enters at the beginning and is not killed as control flows through the statement.” Such equations are called data-flow equation.

1.     The details of how data-flow equations are set and solved depend on three factors. The notions of generating and killing depend on the desired information, i.e., on the data flow analysis problem to be solved. Moreover, for some problems, instead of proceeding along with flow of control and defining out[S] in terms of in[S], we need to proceed backwards and define in[S] in terms of out[S].

2.     Since data flows along control paths, data-flow analysis is affected by the constructs in a program. In fact, when we write out[s] we implicitly assume that there is unique end point where control leaves the statement; in general, equations are set up at the level of basic blocks rather than statements, because blocks do have unique end points.

3.     There are subtleties that go along with such statements as procedure calls, assignments through pointer variables, and even assignments to array variables.

Within a basic block, we talk of the point between two adjacent statements, as well as the point before the first statement and after the last. Thus, block B1 has four points: one before any of the assignments and one after each of the three assignments. 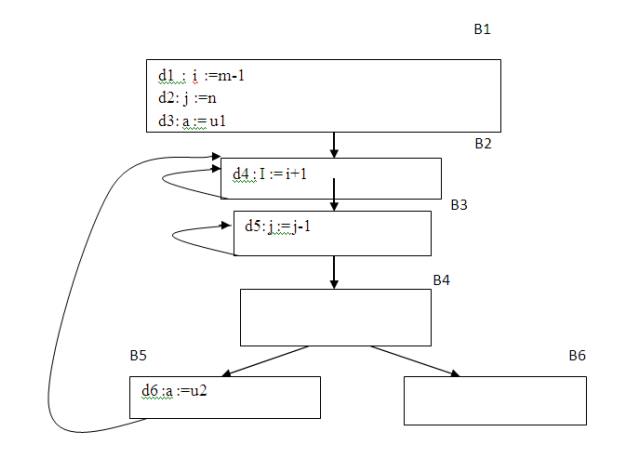 Now let us take a global view and consider all the points in all the blocks. A path from p1 to pn is a sequence of points p1, p2,….,pn such that for each i between 1 and n-1, either

The most usual forms of ambiguous definitions of x are:

1.     A call of a procedure with x as a parameter or a procedure that can access x because x is in the scope of the procedure. 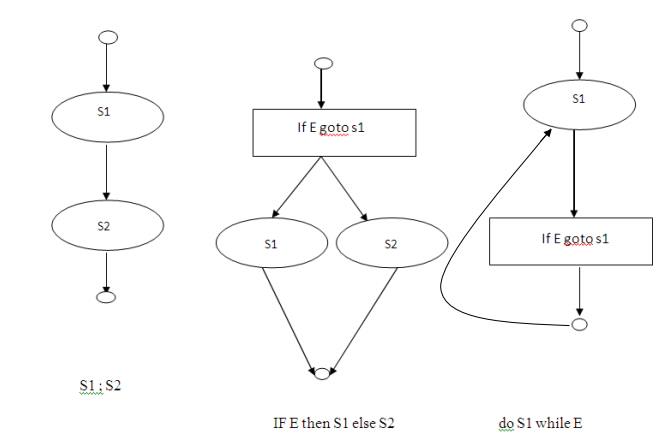 Flow graphs for control flow constructs such as do-while statements have a useful property: there is a single beginning point at which control enters and a single end point that control leaves from when execution of the statement is over. We exploit this property when we talk of the definitions reaching the beginning and the end of statements with the following syntax.

Expressions in this language are similar to those in the intermediate code, but the flow graphs for statements have restricted forms.

We define a portion of a flow graph called a region to be a set of nodes N that includes a header, which dominates all other nodes in the region. All edges between nodes in N are in the region, except for some that enter the header. The portion of flow graph corresponding to a statement S is a region that obeys the further restriction that control can flow to just one outside block when it leaves the region.

Observe the rules for a single assignment of variable a. Surely that assignment is a definition of a, say d. Thus

On the other hand, d “kills” all other definitions of a, so we write

Where, Da is the set of all definitions in the program for variable a.

Similar reasoning applies to the killing of a definition, so we have

There is a subtle miscalculation in the rules for gen and kill. We have made the assumption that the conditional expression E in the if and do statements are “uninterpreted”; that

is, there exists inputs to the program that make their branches go either way.

These containments hold even after we consider the other rules. It is natural to wonder whether these differences between the true and computed gen and kill sets present a serious obstacle to data-flow analysis. The answer lies in the use intended for these data.

Returning now to the implications of safety on the estimation of gen and kill for reaching definitions, note that our discrepancies, supersets for gen and subsets for kill are both in the safe direction. Intuitively, increasing gen adds to the set of definitions that can reach a point, and cannot prevent a definition from reaching a place that it truly reached. Decreasing kill can only increase the set of definitions reaching any given point.

Computation of in and out:

Many data-flow problems can be solved by synthesized translation to compute gen and kill. It can be used, for example, to determine computations. However, there are other kinds of data-flow information, such as the reaching-definitions problem. It turns out that in is an inherited attribute, and out is a synthesized attribute depending on in. we intend that in[S] be the set of definitions reaching the beginning of S, taking into account the flow of control throughout the entire program, including statements outside of S or within which S is nested.

The set out[S] is defined similarly for the end of s. it is important to note the distinction between out[S] and gen[S]. The latter is the set of definitions that reach the end of S without following paths outside S. Assuming we know in[S] we compute out by equation, that is

Considering cascade of two statements S1; S2, as in the second case. We start by observing in[S1]=in[S]. Then, we recursively compute out[S1], which gives us in[S2], since a definition reaches the beginning of S2 if and only if it reaches the end of S1. Now we can compute out[S2], and this set is equal to out[S].

Sets of definitions, such as gen[S] and kill[S], can be represented compactly using bit vectors. We assign a number to each definition of interest in the flow graph. Then bit vector representing a set of definitions will have 1 in position I if and only if the definition numbered I is in the set.

Space for data-flow information can be traded for time, by saving information only at certain points and, as needed, recomputing information at intervening points. Basic blocks are usually treated as a unit during global flow analysis, with attention restricted to only those points that are the beginnings of blocks.

The techniques for conserving space during attribute evaluation, also apply to the computation of data-flow information using specifications. Specifically, the only constraint on the evaluation order for the gen, kill, in and out sets for statements is that imposed by dependencies between these sets. Having chosen an evaluation order, we are free to release the space for a set after all uses of it have occurred. Earlier circular dependencies between attributes were not allowed, but we have seen that data-flow equations may have circular dependencies.