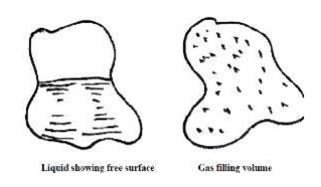 Fluids do not resist a change in shape. Therefore fluids assume the shape of the container they occupy.

Liquids may be considered to have a fixed volume and therefore can have a free surface.

We will usually be interested in liquids, either at rest or in motion. 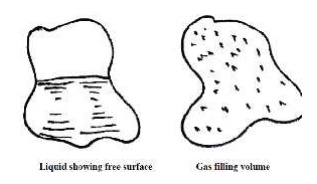 The strict definition of a fluid is: A fluid is a substance which conforms continuously

under the action of shearing forces.

To understand this, remind ourselves of what a shear force is:

According to this definition, if we apply a shear force to a fluid it will deform and take up

a state in which no shear force exists. Therefore, we can say: If a fluid is at rest there can be no shearing forces acting and therefore all forces in the fluid must be perpendicular to the planes in which they act. Note here that we specify that the fluid must be at rest. This is because, it is found experimentally that fluids in motion can have slight resistance to shear force. This is

the source of viscosity.