The autonomic nerves enter the internal organs together with the vessels and form a fine network of noradrenergic (A) or cholin-ergic (B) fibers (enteric plexus).

The autonomic nerves enter the internal or-gans together with the vessels and form a fine network of noradrenergic (A) or cholin-ergic (B) fibers (enteric plexus). The fibers terminate on smooth-muscle cells and on glands. Vascular muscles influence the function of many organs (regulation of blood flow by contraction or dilatation of vessels). It is not known whether parenchy-mal organs such as liver or kidneys contain secretory fibers.

The digestive tract is supplied by two differ-ent plexuses, namely, the submucous plexus (Meissner’s plexus) and the myenteric plexus (Auerbach’s plexus). The submucous plexus(C1, D) forms a three-dimensional network throughout the entire submucosa. It is an ir-regular meshwork of bundles containing medium-sized to very fine nerve fibers that become finer and narrower toward the mu-cosa. Aggregations of neurons form small intramural ganglia at the intersection of fibers.

The intramural ganglia (E) contain primarily multipolar, rarely unipolar, neurons with granular Nissl substance. The neurons are surrounded by flat sheath cells, and their numerous long dendrites are thin and often indistinguishable from axons. The axons are extremely thin, unmyelinated or poorly my-elinated, and often arise from a dendrite rather than the perikaryon. Between the neurons lies a dense network of fibers in which it is difficult to differentiate between dendrites, terminating axons, and fibers passing through the ganglion. Sympathetic and parasympathetic neurons have the same shape; they can only be distinguished histochemically. 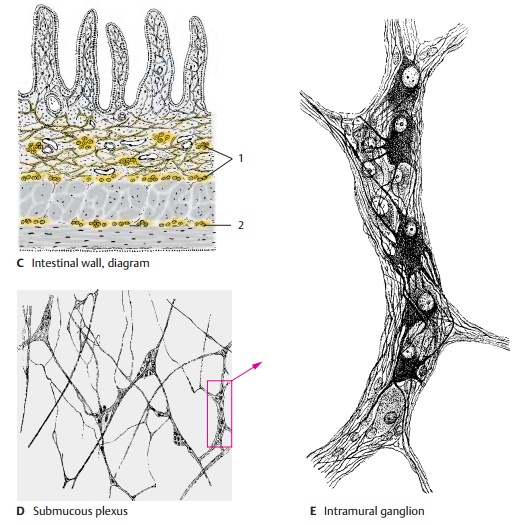 The myenteric plexus (C2) is embedded in a narrow space between the transverse and longitudinal muscles of the intestine. It con-sists of a relatively regular network of coarse and fine fiber bundles. Apart from the intramural ganglia at the intersections, there are numerous neurons that are often arranged in rows along the fiber bundles.

The enormous number of neurons scattered throughout the tissue almost amounts to an independent nervous organ. This explains the local autonomy of the gastrointestinal tract, which remains functional even after denervation.

As derivatives of the neural crest, the paraganglia and the adrenal medulla are regarded as part of the autonomic nervous system (see vol. 2).