The vegetative or autonomic nervous system supplies the internal organs and theircoverings. Almost all tissues of the body are permeated by a plexus of very delicate nerve fibers.

The vegetative or autonomic nervous system supplies the internal organs and theircoverings. Almost all tissues of the body are permeated by a plexus of very delicate nerve fibers. We distinguish between afferent (viscerosensory) and efferent (visceromo-tor and secretory) fibers. The neurons withsensory fibers lie in the spinal ganglia. The neurons giving rise to efferent fibers form cell clusters scattered throughout the body; these clusters are surrounded by a connec-tive-tissue sheath and are known as auto-nomic ganglia.

The main function of the autonomic nervous system is to stabilize the internalenvironment of the organism and to regulate the function of the organsin accordance withthe changing requirements of the surround-ings. This regulation is achieved by interac-tion of two antagonistic parts of the auto-nomic system, the sympathetic nervous system (A1) (yellow) and the parasympatheticnervous system (A2) (green). The sympatheticnervous system is stimulated by increased physical activity, resulting in elevated blood pressure, accelerated heart rate and respira-tory rate, dilated pupils, raised hair, and in-creased perspiration. At the same time, the peristaltic activity of the gastrointestinal tract is suppressed and secretion by intesti-nal glands is reduced. When the parasym-pathetic system predominates, it increases peristaltic activity and intestinal secretion, stimulates defecation and urination, and re-duces the heart rate and respiratory rate, while the pupils constrict. The sympathetic nervous system is responsible forincreasedperformance under stress and in states ofemergency, while the parasympathetic nervous system promotes metabolism, re-generation, and the buildup of body re-serves.

The division of the autonomic nervous sys-tem into a sympathetic part and a parasym-pathetic part refers to visceromotor and secretory fibers. Such a distinction is notpossible in case of viscerosensory fibers. 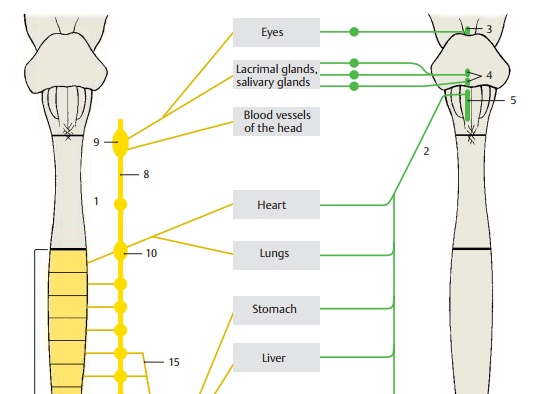 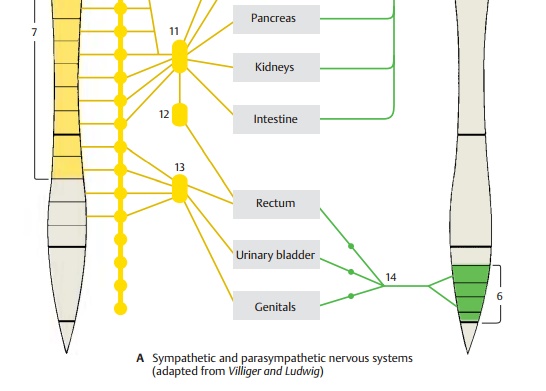 The highest integration organ of the auto-nomic nervous system is the hypothalamus. It also regulates the endocrine glands through its connection to the hypophysis, and it coordinates the autonomic nervous system and the endocrine system. Cell groups in the reticular formation of the brain stem alsoparticipate in the central regulation of organ functions (heart rate, respiratory rate, blood pressure, ).

The fibers of the central parasympathetic neurons run within various cranial nerves to the parasympathetic ganglia in the head re-gion (pp. 128, 130) where they synapse; the postganglionic fibers extend to the effector organs. The vagus nerve (A1), which is the principal nerve of the parasympathetic nervous system, descends together with the large cerebral vessels (neurovascular trunk of the neck); after passing through the supe-rior thoracic aperture, it divides into plex-uses in the regions of the thoracic and abdominal viscera.

The cells lying in the intermediolateral nu-cleus and intermediomedial nucleus of the sacral spinal cord send their axons through the third and fourth sacral root (A2) to the pudendal nerve; from here the fibers pass as pelvic nerves into the inferior hypogastric plexus and to the pelvic organs (urinarybladder [A3], rectum, and genitals). Syn-apses with postganglionic neurons are formed in the inferior hypogastric plexus or in small ganglia of the various organ plex-uses. As is the case with the sympathetic nervous system, the peripheral supply is provided by two neurons: the first neuron (preganglionic neuron) in the spinal cord, and the second neuron (postganglionic neu-ron) in the ganglia. 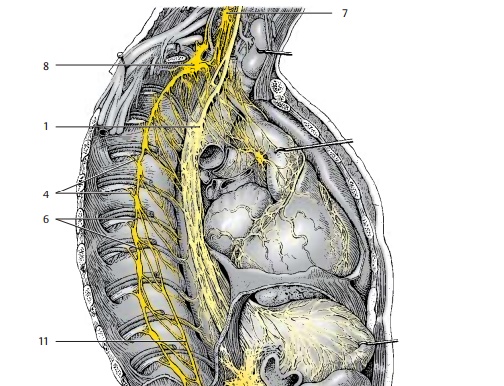 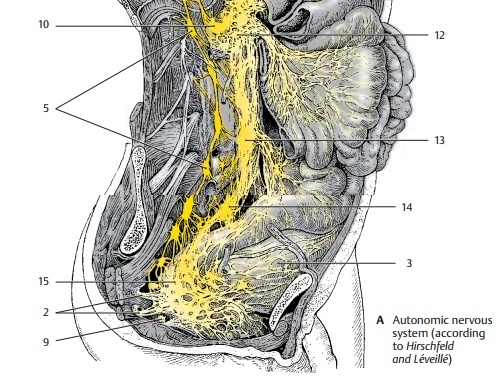 The sympathetic neurons in the thoracic and lumbar lateral horn send their axons via the communicating branches (A4) to the sympathetic trunk(A5). The lat-ter consists of a chain of sympathetic gan-glia which lie on each side of the vertebral column, in front of the transverse processes of each vertebra, and extend from the base of the skull to the coccyx. They are intercon-nected by interganglionic branches (A6). There are three ganglia in the cervical seg-ment, namely, thesuperior cervical ganglion,the variable middle cervical ganglion (A7), and the stellate ganglion (cervicothoracicganglion) (A8). Thethoracic segmentcontains10 – 11 ganglia, the lumbar segment usually four, and the sacral segment also four ganglia. The chain is completed by the small un-paired ganglion (A9) which lies in themiddle in front of the coccyx. The sacral ganglia receive their preganglionic fibers via interganglionic branches from spinal cord levels T12 – L2.

From the thoracic and lumbar sympathetic trunk ganglia, nerves extend to ganglia that lie within dense nervous plexuses on both sides of the abdominal aorta. The upper group of ganglia are the celiac ganglia (A10) to which the greater splanchnic nerve (A11) extends from the fifth to the ninth sympa-thetic trunk ganglia. Below it lies the supe-rior mesenteric ganglion (A12) and the infe-rior mesenteric ganglion (A13). The superior hypogastric plexus (A14) and the inferior hy-pogastric plexus (A15) expand in the pelvis. 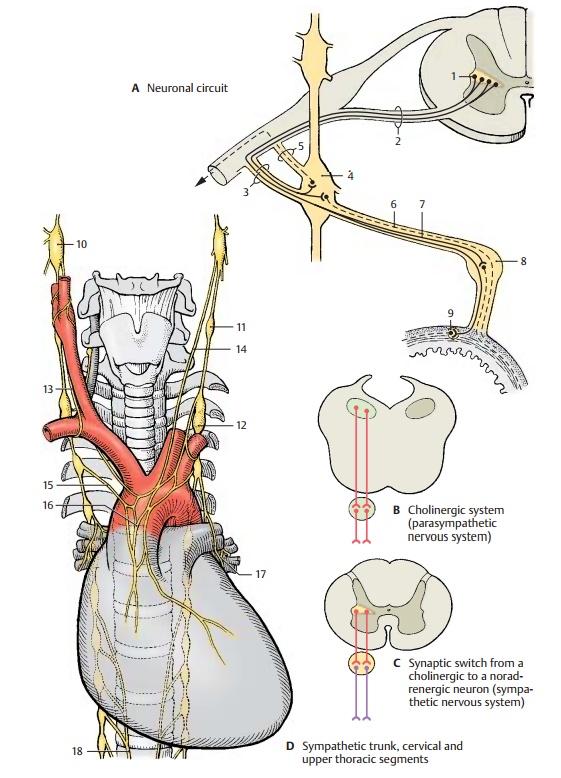 Other postganglionic fibers (A6) extend from the sympathetic trunk via autonomic nerves to the organs. Some preganglionic fibers (A7) pass through the ganglion without synapsing and terminate in the pre-vertebral ganglia (A8) which lie on both sidesof the aorta. Numerous small and very smallterminal ganglia (A9) lie in the regions of in-ternal organs. They are part of the neu-roplexuses spreading through each organ; they are found in the sheaths (extramuralganglia) as well as inside the organs (in-tramural ganglia). Whereas preganglionicand postganglionic fibers of the parasympa-thetic nervous system are both cholinergic (B), the cholinergic preganglionic fibers of the sympathetic nervous system synapse in the ganglia with noradrenergic neurons (C).

According to their localization, we distin-guish three different types of ganglia in which preganglionic fibers synapse with postganglionic neurons: