The interpretation of a NMR-spectrum can be accomplished by determining the following parameters for each signal methodically as described below :

The interpretation of a NMR-spectrum can be accomplished by determining the following parameters for each signal methodically as described below :

The chemical shift indicates the environment of the proton. One may refer to the tables and charts in various reference books* for approximate ranges of δ for 1H in different environments.

This is equal to the height of step of the integration trace.

In fact, peak area is proportional to the number of protons causing the signal. Always look for simple ratios e.g., 3 : 1, rather than (say) 14 : 4. A strong singlet (or upfield triplet) may indicate CH3 ; the corre-sponding integration steps provide a good starting point for ascertaining the relative number of protons present in the molecule under investigation.

3. MULTIPLICITY OF THE SIGNAL

The number of peaks in a regularly split signal (e.g., a regularly spaced triplet, quartet etc., ) or other recognisable splittings (e.g., doublet of doublets etc.,), should be noted carefully.

Therefore, multiplicity and the relative peak heights in a multiplet provide an useful additional check on the relative number of protons obtained from the integration of peak areas.

Thus, coupling 1Ha to another 1Hb may give rise to a doublet or a triplet or a doublet-of-doublet as shown below : 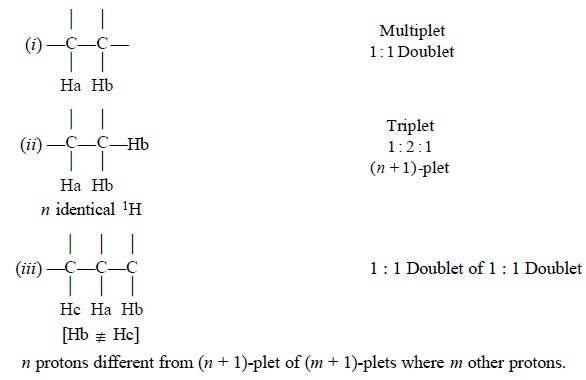 The coupling constants help in the identification of the coupled nuclei because Jab = Jba : and are therefore, useful in characterizing the relative orientations of interacting protons. 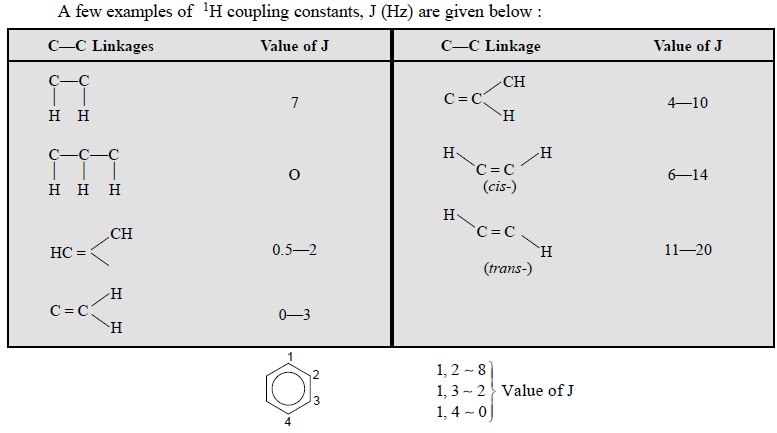