Topographic maps are general reference maps. They are also called ordnance maps. These maps are ideal for researchers, planners, administrators, defence personal, hikers, tourists and for class room purpose. They give clear details of actually surveyed natural and manmade features. These maps are drawn to scale.

Geographical knowledge and clear understanding of conventional signs and symbols is essential to understand and interpret a Survey of India Topographical sheet.

A topographic sheet is usually interpreted under the following sub headings:

Relief refers to the general topography of the area under study. First, the landforms like mountains, hills, plateaus along with the peaks, ridges should be identified and the general direction of slope can be determined. The contour values and patterns have to be studied. Spot heights, bench marks etc help in understanding the height of certain areas.

Drainage of an area can be understood by observing the characteristics of the rivers, their tributaries, drainage pattern.

Important trees are shown by special symbols. Trees, grasses and shrubs are all shown in green colour. Agricultural land is shown in yellow colour.

Land use includes the use of land under different categories like agriculture, pasture, barren land and forest area. Other land use categories could be mining, industry, trade, tourism, fishing or cattle rearing. It also informs us about the presence (location) of airports, railway stations, schools offices, trade centres, electric substations, etc. Sometimes, land use is directly mentioned, for example, brick kiln, limestone quarry, etc. At other times it has to be inferred.

The size, shape, pattern site, position and function of settlements should be considered while interpreting a topographical sheet because all these aspects are interdependent.

Settlements could be dispersed or scattered, compact or nucleated type. They may be radial or linear in pattern. They are also studied under the following heads, based on their size and the activities the population is engaged in.

Permanent settlements are shown by solid squares and temporary ones in outlines of squares.

The basic occupations that the people are probably engaged in, can be understood after the land use pattern and the type of settlement have been understood.

The means of transport and communication being used can be identified from the presence of national and state highways, district and village roads, cart tracks, camel tracks, footpaths, railways, waterways, telephone and telegraph lines, post offices, etc.

Roads are not drawn true to scale. Metalled roads are shown by double lines, and unmetalled by broken double lines. Foot path shown by red dots and cart track by single broken lines. Different kinds of railways are shown by different signs. 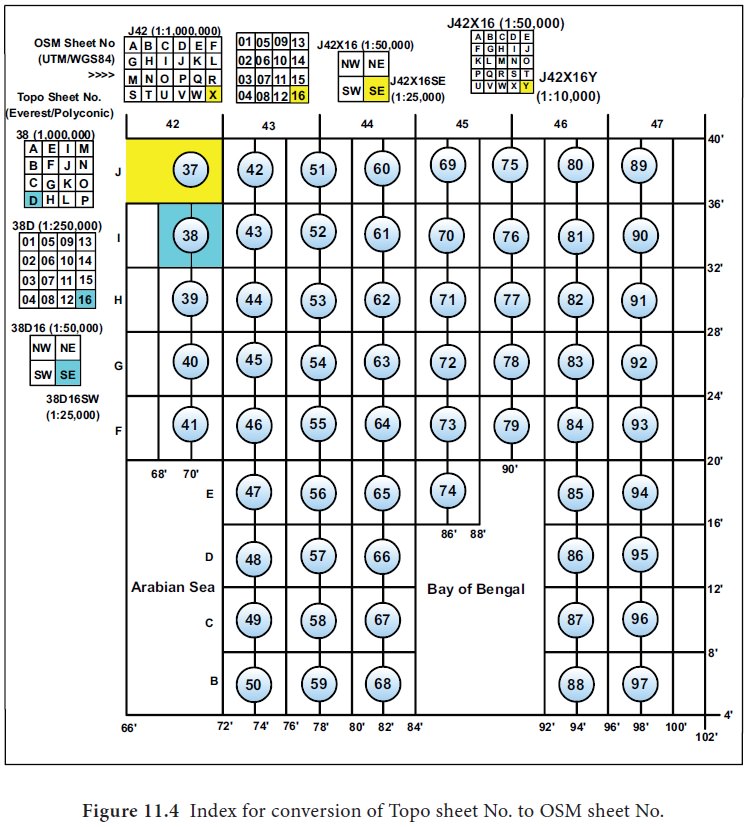