Features which have to be repeatedly represented on maps are depicted by special signs and symbols.

Features which have to be repeatedly represented on maps are depicted by special signs and symbols. The signs bear some pictorial resemblance to the original feature and their meaning is quiet clear. Some conventional signs need to be studied closely before they can be recognised.

Point, line and area symbols are used to depict various physical and cultural features. They can be in the form of alphabets, figures, signs or colour wash.

The Survey Of India ( SOI) have standardised a set of conventional signs and symbols to be used in topographical maps.

Seven colours are commonly used in the maps of Survey of India.

•            Black - All writings on the map except grid numbers (names, abbreviation such as DB, RS, PO), river banks, broken ground, dry streams, surveyed trees, heights and their numbering, railway lines, telephone and telegraph lines, lines of latitude and longitude, all boundaries, any written amplification (such as ‘open scrub’, ‘metalled road under construction’, ‘meter guage’ are given in black.

•            Brown - Contour lines, their numbering, form lines, sand features and barren rocky areas such as hills and dunes are represented in brown.

•            Red - Grid lines (East and North) and their numbering; roads, cart track and foot path, settlements, huts and buildings are shown in red. 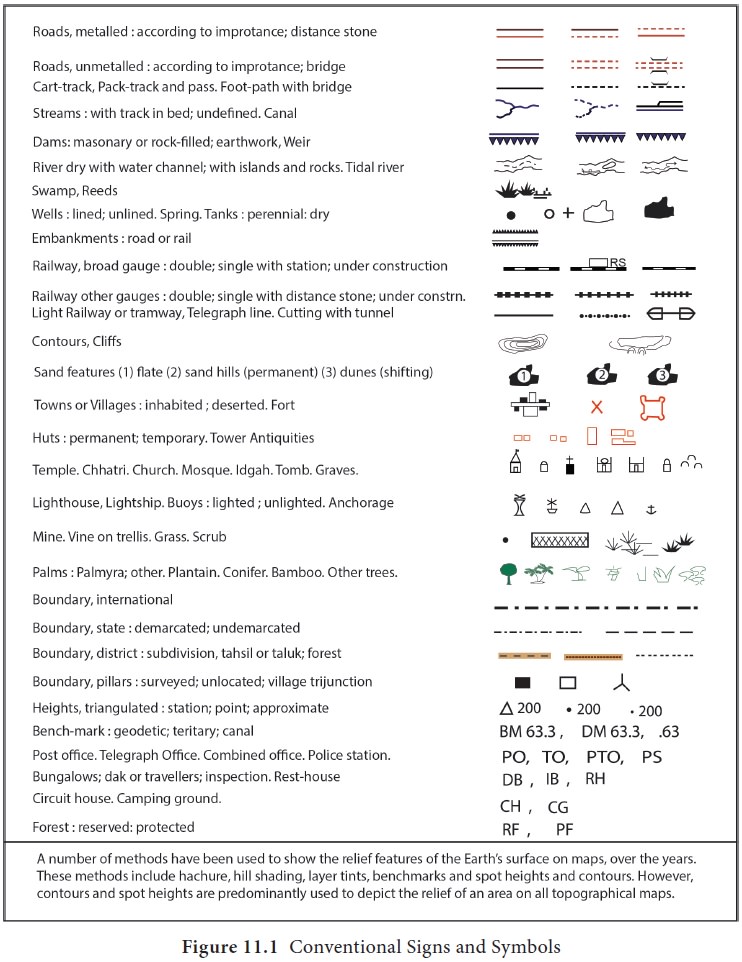