The key management portion of IPsec involves the determination and distribution of secret keys. A typical requirement is four keys for communication between two applications: transmit and receive pairs for both integrity and confidentiality. The IPsec Architecture document mandates support for two types of key management:

•                           Manual: A system administrator manually configures each system with its  own keys and with the keys of other communicating systems. This is practical for small, relatively static environments.

The default automated key management protocol for IPsec is referred to as ISAKMP/Oakley and consists of the following elements:

•                 Oakley Key Determination Protocol: Oakley is a key exchange protocol based on the Diffie-Hellman algorithm but providing added security. Oakley is generic in that it does not dictate specific formats.

In IKEv2, the terms Oakley and ISAKMP are no longer used, and there are significant differences from the use of Oakley and ISAKMP in IKEv1. Nevertheless, the basic functionality is the same. In this section, we describe the IKEv2 specification.

IKE key determination is a refinement of the Diffie-Hellman key exchange algo- rithm. Recall that Diffie-Hellman involves the following interaction between users A and B. There is prior agreement on two global parameters: q, a large prime num- ber; and a, a primitive root of q. A selects a random integer XA as its private key and transmits to B its public key VA  =  aXA mod q. Similarly, B selects a random integer XB as its private key and transmits to A its public key VB  =  aXB mod q. Each side can now compute the secret session key:

•                 Secret keys are created only when needed. There is no need to store secret keys for a long period of time, exposing them to increased vulnerability.

•                 The exchange requires no pre-existing infrastructure other than an agreement on the global parameters.

However, there are a number of weaknesses to Diffie-Hellman, as pointed out in [HUIT98].

•                           It is computationally intensive. As a result, it is vulnerable to a clogging attack, in which an opponent requests a high number of keys. The victim spends considerable computing resources doing useless modular exponentiation rather than real work.

IKE key determination is designed to retain the advantages of Diffie- Hellman, while countering its weaknesses.

We have already discussed Diffie-Hellman. Let us look at the remainder of these elements in turn. First, consider the problem of clogging attacks. In this attack, an opponent forges the source address of a legitimate user and sends a public Diffie- Hellman key to the victim. The victim then performs a modular exponentiation to compute the secret key. Repeated messages of this type can clog the victim’s system with useless work. The cookie exchange requires that each side send a pseudoran- dom number, the cookie, in the initial message, which the other side acknowledges. This acknowledgment must be repeated in the first message of the Diffie-Hellman key exchange. If the source address was forged, the opponent gets no answer. Thus, an opponent can only force a user to generate acknowledgments and not to perform the Diffie-Hellman calculation.

IKE key determination supports the use of different groups for the Diffie- Hellman key exchange. Each group includes the definition of the two global parame- ters and the identity of the algorithm. The current specification includes the following groups.

The first three groups are the classic Diffie-Hellman algorithm using modular exponentiation. The last two groups use the elliptic curve analog to Diffie-Hellman, which was described in Chapter 10.

IKE key determination employs nonces to ensure against replay attacks. Each nonce is a locally generated pseudorandom number. Nonces appear in responses and are encrypted during certain portions of the exchange to secure their use.

•                 Digital signatures: The exchange is authenticated by signing a mutually obtainable hash; each party encrypts the hash with its private key. The hash is generated over important parameters, such as user IDs and nonces.

•                 Public-key encryption: The exchange is authenticated by encrypting parame- ters such as IDs and nonces with the sender’s private key.

IKEV2 EXCHANGES The IKEv2 protocol involves the exchange of messages in pairs. The first two pairs of exchanges are referred to as the initial exchanges (Figure 19.11a). In the first exchange, the two peers exchange information concerning cryptographic algorithms and other security parameters they are willing to use along with nonces and Diffie-Hellman (DH) values. The result of this exchange is to set up a special SA called the IKE SA (see Figure 19.2). This SA defines parameters for a secure channel between the peers over which subsequent message exchanges take place. Thus, all subsequent IKE message exchanges are protected by encryption and message authentication. In the second exchange, the two parties authenticate one another and set up a first IPsec SA to be placed in  the SADB and used for protecting ordinary (i.e. non-IKE) communications between the peers. Thus, four messages are needed to establish the first SA for general use. 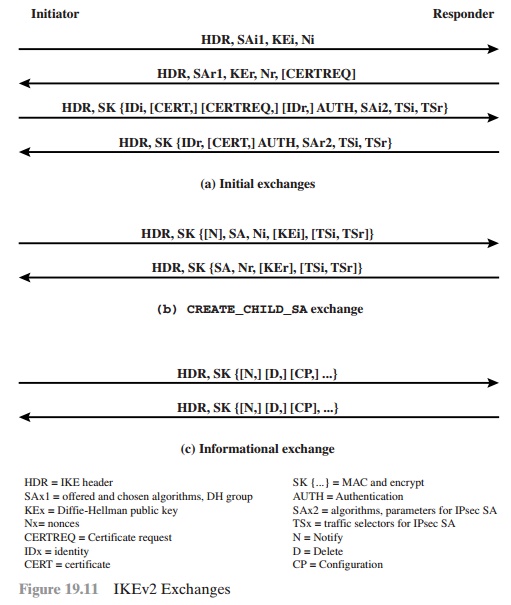 The CREATE_CHILD_SA exchange can be used to establish further SAs for protecting traffic. The informational exchange is used to exchange management information, IKEv2 error messages, and other   notifications.

IKE HEADER FORMAT An IKE message consists of an IKE header followed by one or more payloads. All of this is carried in a transport protocol. The specification dictates that implementations must support the use of UDP for the transport protocol.

Figure 19.12a shows the header format for an IKE message. It consists of the following fields. 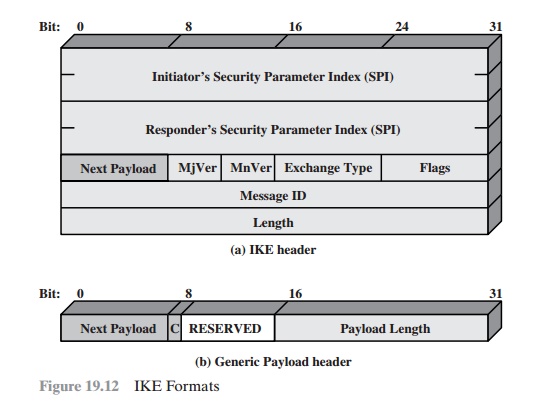 IKE PAYLOAD TYPES All IKE payloads begin with the same generic payload header shown in Figure 19.12b. The Next Payload field has a value of 0 if this is the last payload in the message; otherwise its value is the type of the next payload. The Payload Length field indicates the length in octets of this payload, including the generic payload header.

Table 19.3 summarizes the payload types defined for IKE and lists the fields, or parameters, that are part of each payload. The SA payload is used to begin 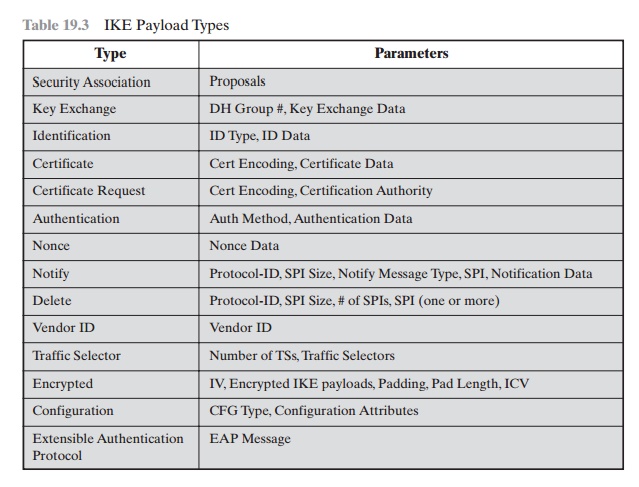 •                 Attribute: Each transform may include attributes that modify or complete the specification of the transform. An example is key  length.

The Identification payload is used to determine the identity of communicating peers and may be used for determining authenticity of information. Typically the ID Data field will contain an IPv4 or IPv6 address.

The Nonce payload contains random data used to guarantee liveness during an exchange and to protect against replay attacks.

The Notify payload contains either error or status information associated with this SA or this SA negotiation. The following table lists the IKE notify messages. 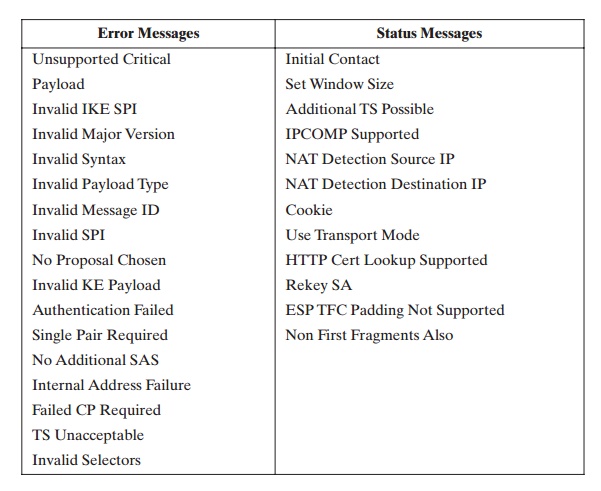 The Delete payload indicates one or more SAs that the sender has deleted from its database and that therefore are no longer valid.

The Vendor ID payload contains a vendor-defined constant. The constant is used by vendors to identify and recognize remote instances of their implementa- tions. This mechanism allows a vendor to experiment with new features while maintaining  backward compatibility.

The Configuration payload is used to exchange configuration information between IKE peers.

The Extensible Authentication Protocol (EAP) payload allows IKE SAs to be authenticated using EAP, which was discussed in Chapter 17.