ESP can be used to provide confidentiality, data origin authentication, connection- less integrity, an anti-replay service (a form of partial sequence integrity), and (lim- ited) traffic flow confidentiality. The set of services provided depends on options selected at the time of Security Association (SA) establishment and on the location of the implementation in a network topology.

Figure 19.5a shows the top-level format of an ESP packet. It contains the following fields. 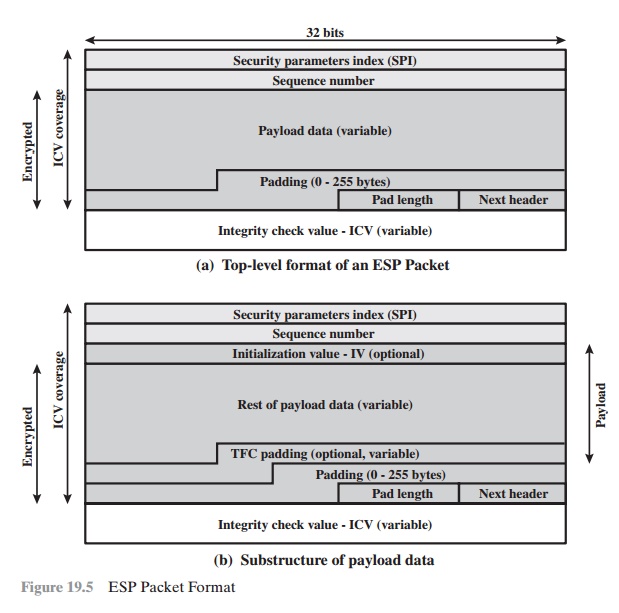 Two additional fields may be present in the payload (Figure 19.5b). An initialization value (IV), or nonce, is present if this is required by the encryption or authenticated encryption algorithm used for ESP. If tunnel mode is being used, then the IPsec implementation may add traffic flow confidentiality (TFC) padding after the Payload Data and before the Padding field, as explained subsequently.

The Payload Data, Padding, Pad Length, and Next Header fields are encrypted by the ESP service. If the algorithm used to encrypt the payload requires crypto- graphic synchronization data, such as an initialization vector (IV), then these data may be carried explicitly at the beginning of the Payload Data field. If included, an IV is usually not encrypted, although it is often referred to as being part of the ciphertext.

The ICV field is optional. It is present only if the integrity service is selected and is provided by either a separate integrity algorithm or a combined mode algo- rithm that uses an ICV. The ICV is computed after the encryption is performed. This order of processing facilitates rapid detection and rejection of replayed or bogus packets by the receiver prior to decrypting the packet, hence potentially reducing the impact of denial of service (DoS) attacks. It also allows for the possibility of par- allel processing of packets at the receiver, i.e., decryption can take place in parallel with integrity checking. Note that because the ICV is not protected by encryption, a keyed integrity algorithm must be employed to compute the ICV.

•                 If an encryption algorithm requires the plaintext to be a multiple of some number of bytes (e.g., the multiple of a single block for a block cipher), the Padding field is used to expand the plaintext (consisting of the Payload Data, Padding, Pad Length, and Next Header fields) to the required length.

•                 The ESP format requires that the Pad Length and Next Header fields be right aligned within a 32-bit word. Equivalently, the ciphertext must be an integer multiple of 32 bits. The Padding field is used to assure this alignment.

Additional padding may be added to provide partial traffic-flow confidential- ity by concealing the actual length of the payload.

A replay attack is one in which an attacker obtains a copy of an authenticated packet and later transmits it to the intended destination. The receipt of duplicate, authenticated IP packets may disrupt service in some way or may have some other undesired consequence. The Sequence Number field is designed to thwart such attacks. First, we discuss sequence number generation by the sender, and then we look at how it is processed by the recipient.

When a new SA is established, the sender initializes a sequence number counter to 0. Each time that a packet is sent on this SA, the sender increments the counter and places the value in the Sequence Number field. Thus, the first value to be used is 1. If anti-replay is enabled (the default), the sender must not allow  the

sequence number to cycle past 232 – 1 back to zero. Otherwise, there would be multiple valid packets with the same sequence number. If the limit of 232 – 1   is

reached, the sender should terminate this SA and negotiate a new SA with a new key. Because IP is a connectionless, unreliable service, the protocol does not guar- antee that packets will be delivered in order and does not guarantee that all packets will be delivered. Therefore, the IPsec authentication document dictates that the receiver should implement a window of size W, with a default of W = 64. The right edge of the window represents the highest sequence number, N, so far received for a valid packet. For  any  packet  with  a  sequence  number  in  the range from N - W + 1 to N that has been correctly received (i.e., properly authenticated), the corresponding slot in the window is marked (Figure 19.6). Inbound  processing

proceeds as follows when a packet is  received:

Figure 19.7 shows two ways in which the IPsec ESP service can be used. In the upper part of the figure, encryption (and optionally authentication) is provided directly between two hosts. Figure 19.7b shows how tunnel mode operation can be used to set up a virtual private network. In this example, an organization has four private networks interconnected across the Internet. Hosts on the internal networks use the Internet for transport of data but do not interact with other Internet-based hosts. By terminating the tunnels at the security gateway to each internal network, the configu- ration allows the hosts to avoid implementing the security capability. The former technique is supported by a transport mode SA, while the latter technique uses a tunnel mode SA.

In this section, we look at the scope of ESP for the two modes. The consid- erations are somewhat different for IPv4 and IPv6. We use the packet formats of Figure 19.8a as a starting point.

TRANSPORT MODE ESP Transport mode ESP is used to encrypt and optionally authenticate the data carried by IP (e.g., a TCP segment), as shown in Figure 19.8b. 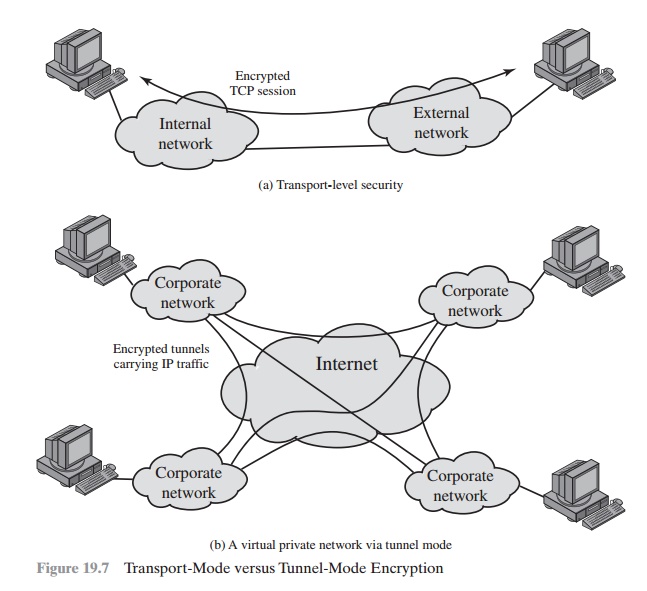 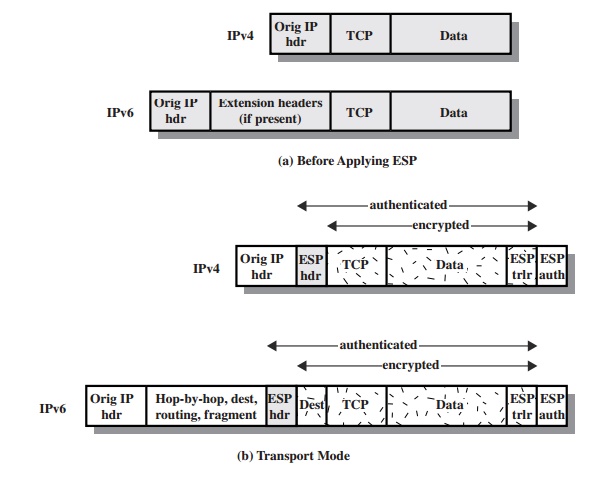 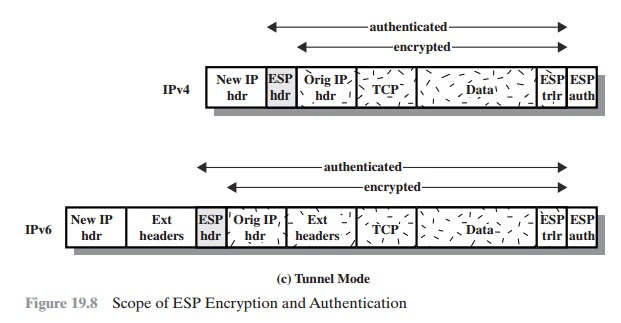 Transport mode operation may be summarized as follows.

1.                        At the source, the block of data consisting of the ESP trailer plus the entire transport-layer segment is encrypted and the plaintext of this block is replaced with its ciphertext to form the IP packet for transmission. Authentication is added if this option is selected.

2.                        The packet is then routed to the destination. Each intermediate router needs to examine and process the IP header plus any plaintext IP extension headers but does not need to examine the ciphertext.

Transport mode operation provides confidentiality for any application that uses it, thus avoiding the need to implement confidentiality in every individual application. One drawback to this mode is that it is possible to do traffic analysis on the transmitted packets.

TUNNEL MODE ESP Tunnel mode ESP is used to encrypt an entire IP packet (Figure 19.8c). For this mode, the ESP header is prefixed to the packet and then the packet plus the ESP trailer is encrypted. This method can be used to counter traffic analysis.

Because the IP header contains the destination address and possibly source routing directives and hop-by-hop option information, it is not possible simply to transmit the encrypted IP packet prefixed by the ESP header. Intermediate routers would be unable to process such a packet. Therefore, it is necessary to encapsulate the entire block (ESP header plus ciphertext plus Authentication Data, if present) with a new IP header that will contain sufficient information for routing but not for traffic analysis.

Whereas the transport mode is suitable for protecting connections between hosts that support the ESP feature, the tunnel mode is useful in a configuration that includes a firewall or other sort of security gateway that protects a trusted network from external networks. In this latter case, encryption occurs only between an exter- nal host and the security gateway or between two security gateways. This relieves hosts on the internal network of the processing burden of encryption and simplifies the key distribution task by reducing the number of needed keys. Further, it thwarts traffic analysis based on ultimate destination.

Figure 19.9 shows the protocol architecture for the two modes.