Fundamental to the operation of IPsec is the concept of a security policy applied to each IP packet that transits from a source to a destination. IPsec policy is determined primarily by the interaction of two databases, the security association database (SAD) and the security policy database (SPD). This section provides an overview of these two databases and then summarizes their use during IPsec operation. Figure 19.2 illustrates the relevant relationships.

A key concept that appears in both the authentication and confidentiality mecha- nisms for IP is the security association (SA). An association is a one-way logical con- nection between a sender and a receiver that affords security services to the traffic carried on it. If a peer relationship is needed for two-way secure exchange, then two security associations are required. Security services are afforded to an SA for the use of AH or ESP, but not both.

A security association is uniquely identified by three parameters.

•                 Security Parameters Index (SPI): A bit string assigned to this SA and having local significance only. The SPI is carried in AH and ESP headers to enable the receiving system to select the SA under which a received packet will be processed.

•                 IP Destination Address: This is the address of the destination endpoint of the SA, which may be an end-user system or a network system such as a firewall or router.

•                 Security Protocol Identifier: This field from the outer IP header indicates whether the association is an AH or ESP security association.

Hence, in any IP packet, the security association is uniquely identified by the Destination Address in the IPv4 or IPv6 header and the SPI in the enclosed exten- sion header (AH or ESP).

In each IPsec implementation, there is a nominal2 Security Association Database that defines the parameters associated with each SA. A security association is nor- mally defined by the following parameters in an SAD entry.

•                 Sequence Counter Overflow: A flag indicating whether overflow of the Sequence Number Counter should generate an auditable event and prevent further transmission of packets on this SA (required for all implementations).

•                 Lifetime of this Security Association: A time interval or byte count after which an SA must be replaced with a new SA (and new SPI) or terminated, plus an indication of which of these actions should occur (required for all implementations).

•                           Path MTU: Any observed path maximum transmission unit (maximum size of a packet that can be transmitted without fragmentation) and aging variables (required for all implementations).

IPsec provides the user with considerable flexibility in the way in which IPsec services are applied to IP traffic. As we will see later, SAs can be combined in a number of ways to yield the desired user configuration. Furthermore, IPsec provides a high degree of granularity in discriminating between traffic that is afforded IPsec protection and traffic that is allowed to bypass IPsec, as in the former case relating IP traffic to specific SAs.

The means by which IP traffic is related to specific SAs (or no SA in the case of traffic allowed to bypass IPsec) is the nominal Security Policy Database (SPD). In its sim- plest form, an SPD contains entries, each of which defines a subset of IP traffic and points to an SA for that traffic. In more complex environments, there may be multiple entries that potentially relate to a single SA or multiple SAs associated with a single SPD entry. The reader is referred to the relevant IPsec documents for a full discussion. Each SPD entry is defined by a set of IP and upper-layer protocol field values, called selectors. In effect, these selectors are used to filter outgoing traffic in order to map it into a particular SA. Outbound processing obeys the following   general

sequence for each IP packet.

•                           Remote IP Address: This may be a single IP address, an enumerated list or range of addresses, or a wildcard (mask) address. The latter two are required to support more than one destination system sharing the same SA (e.g., behind a firewall).

Table 19.2 provides an example of an SPD on a host system (as opposed to a network system such as a firewall or router). This table reflects the following config- uration: A local network configuration consists of two networks. The basic corporate network configuration has the IP network number 1.2.3.0/24. The local configura- tion also includes a secure LAN, often known as a DMZ, that is identified as 1.2.4.0/24. The DMZ is protected from both the outside world and the rest of the corporate LAN by firewalls. The host in this example has the IP address 1.2.3.10, and it is authorized to connect to the server 1.2.4.10 in the DMZ.

The entries in the SPD should be self-explanatory. For example, UDP port 500 is the designated port for IKE. Any traffic from the local host to a remote host for purposes of an IKE exchange bypasses the IPsec processing.

OUTBOUND PACKETS  Figure 19.3 highlights the main elements of IPsec processing  for outbound traffic. A block of data from a higher layer, such as TCP, is passed down to the IP layer and an IP packet is formed, consisting of an IP header and an   IP body. Then the following steps occur: 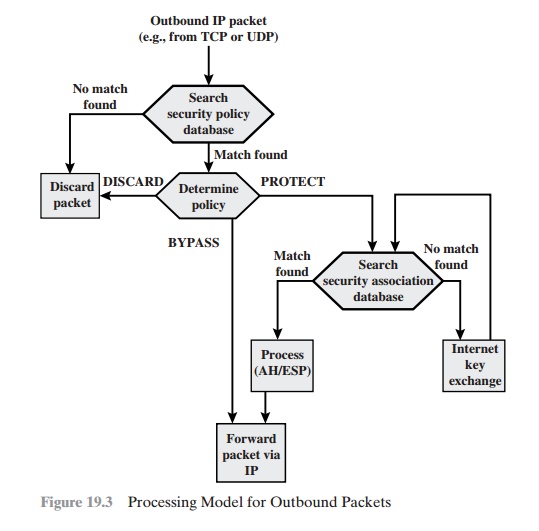 IPsec determines whether this is an unsecured IP packet or one that has ESP or AH headers/trailers, by examining the IP Protocol field (IPv4) or Next Header field (IPv6). 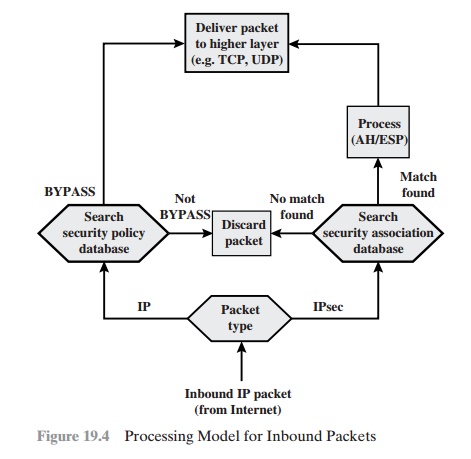