In most of the cases, the PPI 8255 is used for interfacing the analog to digital converters with microprocessor.

• In most of the cases, the PPI 8255 is used for interfacing the analog to digital converters with microprocessor.

•    The analog to digital converters is treaded as an input device by the microprocessor, that sends an initialising signal to the ADC to start the analogy to digital data conversation process. The start of conversation signal is a pulse of a specific duration.

1. Ensure the stability of analog input, applied to the ADC.

6.  If the applied input changes before the complete conversion process is over, the digital equivalent of the analog input calculated by the ADC may not be correct.

approximation converters. This technique is one of the fast techniques for analog to digital conversion. The conversion delay is 100μs at a clock frequency of 640 KHz, which is quite

low as compared to other converters. These converters do not need any external zero or full scale adjustments as they are already taken care of by internal circuits. 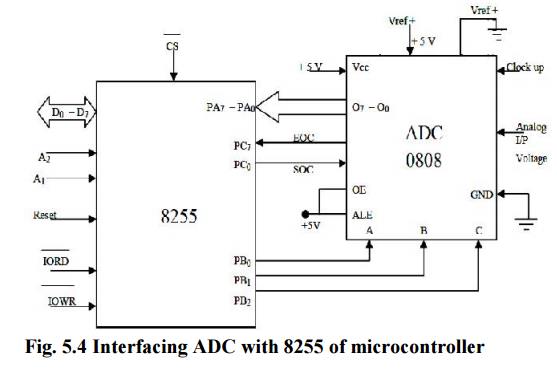 · These converters internally have a 3:8 analog multiplexer so that at a time eight different analog conversion by using address lines - ADD A, ADD B, ADD C. Using these address inputs, multichannel data acquisition system can be designed using a single ADC. The CPU may drive these lines using output port lines in case of multichannel applications. In case of single input applications, these may be hardwired to select the proper input.

• There are unipolar analog to digital converters, i.e. they are able to convert only positive analog input voltage to their digital equivalent. These chips do no contain any internal  sample and hold circuit. If one needs a sample and hold circuit for the conversion of fast signal into equivalent digital quantities, it has to be externally connected at each of the analog inputs.