More than a century has passed since von Mering and Minkowski first demonstrated that pancreatectomized dogs exhibited signs and symptoms characteristic of dia-betes mellitus.

More than a century has passed since von Mering and Minkowski first demonstrated that pancreatectomized dogs exhibited signs and symptoms characteristic of dia-betes mellitus. Shortly thereafter, Banting and Best used pancreatic extracts to reverse these symptoms in diabetic patients, thus providing a basis for establishing a cause-and-effect relationship between insulin deficiency and diabetes. Insulin was subsequently isolated, crystal-lized, and eventually synthesized in the laboratory. Insulin replacement therapy has been widely used in the clinical management of diabetes mellitus for more than 70 years. In 1982, recombinant DNA (rDNA) derived human insulin was first produced and is now widely used instead of insulin derived from beef or pork. More re-cently, insulin analogues have been produced that mod-ulate the activity and rate of insulin action.

Insulin is a relatively simple protein consisting of 51 amino acids arranged as two polypeptide chains, an α- chain and β-chain, connected by disulfide bonds; the lat-ter are necessary to maintain tertiary structure and bio-logical activity (Fig 67.1). Although the amino acid sequence and composition of animal insulins may differ slightly from those of human insulin, their biological ac-tions are similar. Alteration of specific amino acid residues within the insulin molecule yields novel deriv-atives that vary in their pharmacokinetics and binding affinity for the insulin receptor. Some insulin analogues display mitogenic properties in addition to their meta-bolic effects.

The insulin molecule is initially translated in pancreatic β-cells as a large single-chain polypeptide called pre-proinsulin, then further processed to proinsulin by spe-cific endopeptidases and packaged into storage gran-ules prior to release. Proinsulin has little inherent biological activity and must be converted to insulin by the action of specific proteases in the Golgi apparatus; this enzyme action results in the formation of insulin and C (connecting) peptide. C-peptide facilitates the correct folding of the α- and β-chains of insulin and maintains the alignment of the disulfide bridges in in-sulin before cleavage of the C-peptide from insulin. Both insulin and C-peptide are stored in the pancreatic β-cell granules, and both are liberated during insulin se-cretion. Though it is unclear whether C-peptide has any function after it enters the circulation, it is sometimes measured as an indicator of endogenous insulin pro-duction.

The specific stimulus for insulin release involves fluctuations in the serum glucose levels and to a much lesser extent levels of other substrates. Glucose enters the pancreatic β-cell via glucose transporter isoform (GLUT) 4 glucose transporters, is quickly phosphory-lated to glucose-6-phosphate, and triggers an intracellu-lar influx of calcium ions that promotes fusion of the insulin-containing secretory granules with the cell membrane (exocytosis).

Insulin is continuously secreted at a low basal level during fasting, but a postprandial rise in serum glucose or amino acid levels can augment blood levels of insulin severalfold. Other nutrients (e.g., arginine, leucine) and several hormones (e.g., glucagon, growth hormone, secretin, gastrin cholecystokinin, pancre-ozymin, adrenocorticotropin) modulate insulin release. The autonomic nervous system also participates in the regulation of the rate of insulin secretion, with the islets of Langerhans receiving both cholinergic and adrenergic innervation. Insulin secretion is enhanced by vagal (cholinergic) and diminished by sympathetic (adrenergic) stimulation.

Biochemical and Pharmacological Actions of Insulin

The biological actions of insulin are initiated follow-ing a reversible binding of the hormone to a high-affinity specific insulin receptor on the cell membrane surface (Fig. 67.2). The insulin receptor is a hetero-tetrameric tyrosine kinase receptor composed of two α- and two β-subunits. Insulin binds to the α-subunit on the extracellular surface of the cell and activates tyrosine ki-nase activity in the intracellular portion of the β-subunit. This results in the autophosphorylation of the adjacent insulin β-receptor subunit and the phosphorylation of tyrosine residues on cytoplasmic proteins, termed the in-sulin receptor substrate (IRS) 1 and 2. IRS phosphory-lation provides a docking site for other intracellular sig-naling proteins. The regulatory subunit of phosphatidyl inositol 3 (PI-3) kinase (p85) becomes activated and dimerizes with its catalytic subunit (p110), and this com-plex mobilizes the translocation of glucose transporters to the cell membrane surface, which promotes hexose transport. Other downstream signaling pathways include activation of p70-S6 kinase, protein kinase B (both via PI-3 kinase), and Grb2 activation of the Ras-Raf-MAP kinase pathway, which controls glycogen synthesis and cell growth. The hormone–receptor complex may then be internalized by endocytosis, which results in degrada-tion of insulin and recycling of the receptor to the cell membrane surface. 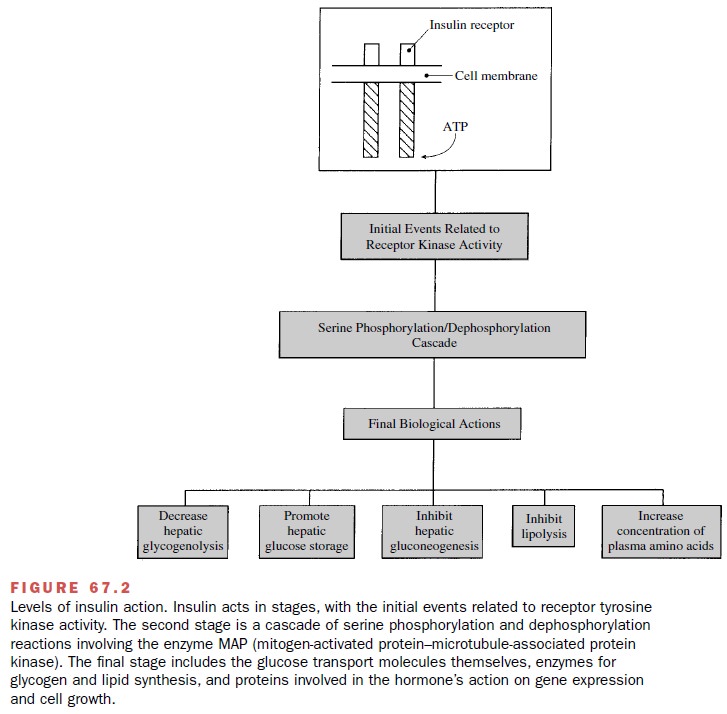 Insulin is usually administered subcutaneously. De-pending on the type of insulin being administered, the rate of insulin absorption can be modulated by altering the polymerization of the insulin molecule (e.g., monomers, dimers, or hexamers).

Intramuscular injec-tions of insulin are used less often because absorption is more rapid. Being a polypeptide hormone, insulin is readily inactivated if administered orally. In emergen-cies, such as severe diabetic ketoacidosis, insulin can be given intravenously. Clinical studies are examining the efficacy and safety of inhaled insulin, which may be promising for some patients.

Once insulin enters the circulation, its plasma half-life is less than 10 minutes. Hepatic insulinases destroy approximately 50% of circulating insulin, with the re-mainder degraded by circulating proteases. Therefore, only a relatively small amount of the total endogenous insulin secreted ever reaches the peripheral tissues. Although a number of tissues accumulate small amounts of insulin, the liver and kidney are the principal sites of hormone uptake and degradation. Insulin metabolism is accomplished both through the actions of an insulin-specific protease found in the cytosol of many tissues and by the reductive cleavage of the insulin disulfide bonds by glutathione–insulin transhydrogenase. In the kidney, insulin that undergoes glomerular filtration is al-most completely reabsorbed and metabolized within the proximal convoluted tubules of the nephron.