Tamil Nadu has a network of about 110 industrial parks/estates that offer developed plots with supporting infrastructure.

Chennai is sometimes referred to as the Health Capital of India or the Banking Capital of India, having attracted investments from International Finance Corporationsand the World Bank. It is also called as Detroit of Asia.

Tamil Nadu has a network of about 110 industrial parks/estates that offer developed plots with supporting infrastructure. Also, the Government is promoting other industrial parks like Rubber Park, Apparel Park, Floriculture Park, TICEL Park for Biotechnology, Siruseri IT Park and Agro Export Zones. 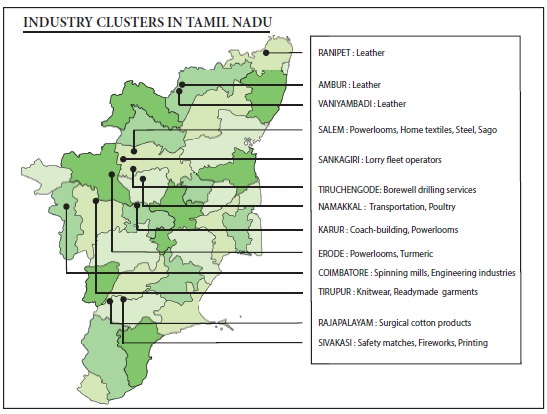 The heavy engineering manufacturing companies are centeredaround the suburbs of Chennai. Chennaiboastsofglobalcarmanufacturing giants as well as home grown companies.

Karur is known for its bus body building which contributes 80% of South Indian bus body building. TNPL is the Asia›s largest ecofriendly paper mill. Salem is called as steel city and has many sago producing units and mineral wealth. Sivakasi is the leader in printing, fireworks, safety matches production in India. It contributes to 80% of India’s total safety matches production and 90% of India’s total fireworks production. Thoothukudi is the gateway of Tamil Nadu. It is a major chemical producer next only to Chennai.

Tamil Nadu is the largest textile hub of India. Tamil Nadu is known as the “ Yarn Bowl” of the country accounting for 41% of India’s cotton yarn production. The textile industry plays a significant role in the Indian economy by providing direct employment to an estimated 35 million people, and thereby contributing 4% of GDP and 35% of gross export earnings. The textile sector contributes to 14% of the manufacturing sector. From spinning to garment manufacturing, entire textile production chain facilities are in Tamil Nadu. About half of India’s total spinning mill capacity is in Tamil Nadu. The western part of Tamil Nadu comprising Coimbatore, Tirupur, Erode, Dindigul and Karur has the majority of spinning mills manufacturing cotton/polyester/blended yarn and silk yarn used by garment units in Tamil Nadu, Maharastra etc. Yarn is also exported to China, Bangladesh etc. Tirupur known as “Knitting City” is the exporter of garments worth USD 3 Billion. Karur is the major home for textile manufacturing (Curtain cloth, bed linens, kitchen linens, toilet linens, table linens, wall hangings etc.) and export hub in India. Erode is the main cloth market in South India for both retail and wholesale ready-mades. 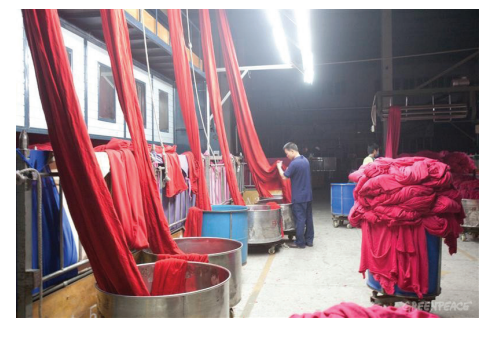 Chennai has emerged as EMS Hub of India. Many multi – national companies have chosen Chennai as their South Asian manufacturing hub.

Chennai nicknamed as “The Detroit of Asia”is home to a large number of auto component industries. Tamil Nadu has 28% share each in automotive and auto components industries, 19% in the trucks segment and 18% each in passenger cars and two wheelers.

The town of Sivakasi is a leader in the areas of printing, fireworks, and safety matches. It was fondly called as “Little Japan” by Jawaharlal Nehru. It contributes to 80% of India’s fireworks production. Sivakasi provides over 60% of India’s total offset printing solutions. 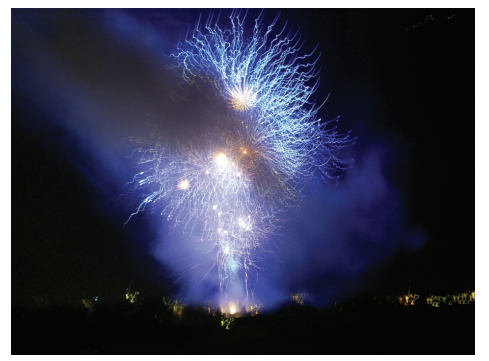 One of the global electrical equipment public sector companies viz BHEL has manufacturing plants at Tiruchirappalli and Ranipet. The Tamil Nadu State Government owns the Tamil Nadu Newsprint and Papers (TNPL), the world’s biggest bagasse-based paper mill in Karur. Tamil Nadu is a leading producer of cement in India and with manufacturing units located at Ariyalur, Virudhunagar, Coimbatore and Tirunelveli. The region around Salem is rich in mineral ores. The country’s largest steel public sector undertaking, SAIL has a steel plant in Salem.

Coimbatore is also referred to as “the Pump City” as it supplies two thirds of India’s requirements of motors and pumps. The city is one of the largest exporters of jewellery, wet grindersand auto components and the term “Coimbatore Wet Grinder” has been given a Geographical indication. 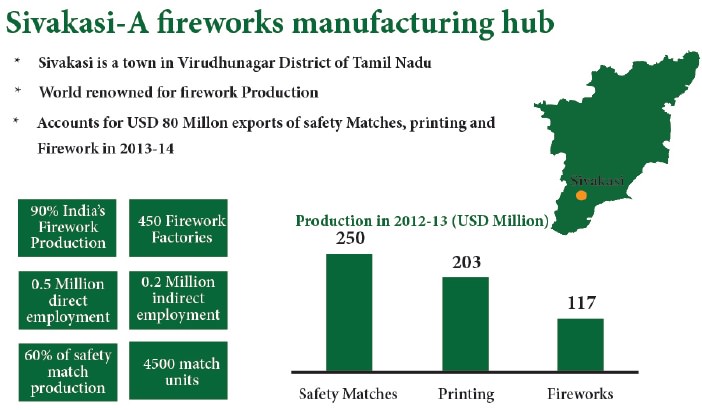 Thoothukudi is known as “Gateway of Tamil Nadu”. Thoothukudi is the major chemical producer in the state. It produces the 70 per cent of the total salt production in the State and 30 per cent in the country. 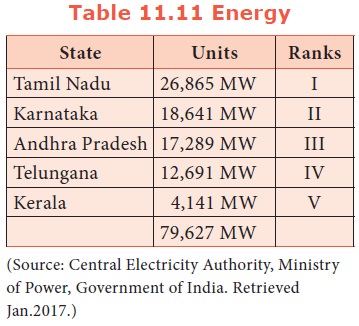 Tamil Nadu accounts of 15.07% Micro, Small and Medium Enterprises (MSMEs) in the country( the highest among all States) with 6.89 lakhs registered MSMEs. Producing over 8000 varieties of product for a total investment of more than Rs.32,008crore.

MSMEs produce a wide variety of products in almost all sectors. The prominent among them are the engineering, electrical, chemicals, plastics, steel paper, matches, textiles, hosiery and garments sector. Around 15.61 lakh entrepreneurs have registered, providing employment opportunities to about 99.7 lakhs persons with total investment of Rs. 1,68,331 crore.