In vivo confirmation of the proposed mechanism of action for rhDNase I has been obtained from direct characterization of apparent DNA size .

In Vivo Activity in CF Sputum

In vivo confirmation of the proposed mechanism of action for rhDNase I has been obtained from direct characterization of apparent DNA size (Fig. 7) and measurements of enzymatic and immunoreactive (ELISA) activity of rhDNase I (Fig. 8) in sputum from CF patients (Sinicropi et al., 1994a). Sputum samples were obtained one to six hours post-dose from adult CF patients after inhalation of 5 to 20 mg of rhDNase I. 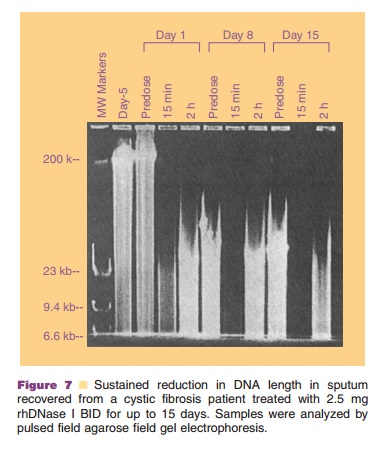 rhDNase I therapy produced a sustained reduction in DNA size in recovered sputum (Fig. 7), in good agreement with the in vitro data.

Inhalation of the therapeutic dose of rhDNase I produced sputum levels of rhDNase I which have been shown to be effective in vitro (Fig. 8) (Shak, 1995). 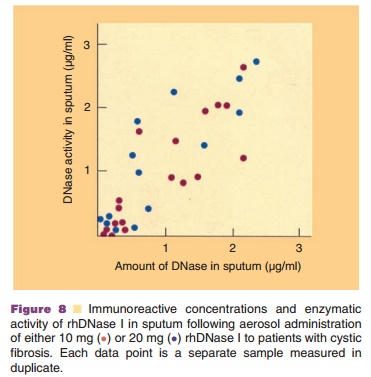 The recovered rhDNase I was also enzymatically active. Enzymatic activity was directly correlated with rhDNase I concentrations in the sputum. Viscoelasticity was reduced in the recovered sputum, as well. Furthermore, results from scintigraphic studies in using twice daily 2.5 mg of rhDNase I in CF patients suggested possible reductions in pulmonary obstruction and increased rates of mucociliary sputum clearance from the inner zone of the lung compared to controls (Laube et al., 1996). This finding was not confirmed in a cross-over design study using once daily dosing, suggesting that improvement of mucociliary clearance may require higher doses (Robinson et al., 2000).