Importing C++ program in a Python program is called wrapping up of C++ in Python.

Importing C++ program in a Python program is called wrapping up of C++ in Python. Wrapping or creating Python interfaces for C++ programs are done in many ways. The commonly used interfaces are

MinGW refers to a set of runtime header files, used in compiling and linking the code of C, C++ and FORTRAN to be run on Windows Operating System.

Refer installation of MinGW in Annexure -3

2. Go to the folder where the Python software is located (Python.exe) is located. In this example “Python folder” is located in

For example here “Python” is located in

The syntax to change from c:\> to the folder where Python is located is

where “cd” command refers to change directory and absolute path refers to the complete path where Python is installed. 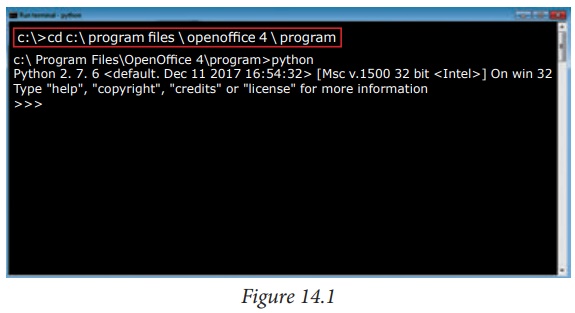 In this Example to go to the folder where Python is located we should type the following command “cd C:\Program Files\OpenOffiice 4\Program”. See that highlighted area in the above window.

Consider the Example pycpp.py is a Python program which will read the C++program Pali.cpp. The “Pali.cpp” program accepts a number and display whether it is a “Palindrome or Not”. For example the entered input number is 232 the output displayed will be “Palindrome”. The C++ program Pali is typed in notepad and saved as pali.cpp. Same way the Python program pycpp.py code is also typed in notepad and saved as pycpp.py.

3. To execute our program double click the run terminal change the path to the Python folder location. The syntax to execute the Python program is

Python : keyword to execute the Python program from command-Line

filename.py - i  : Name of the Python program to executed input mode

C++ filename without cpp extension : name of C++ file to be compiled and executed

For example type Python pycpp.py –i pali in the command prompt and press enter key. If the compilation is successful you will get the desired output. Otherwise the error will be displayed.

Now let us will see the execution through our example pycpp.py and pali.cpp. These two programs are stored in the folder c:\pyprg. If the programs are not located in same folder where the Python exe file is there then the complete path must be specified for the files during execution. The output is displayed below 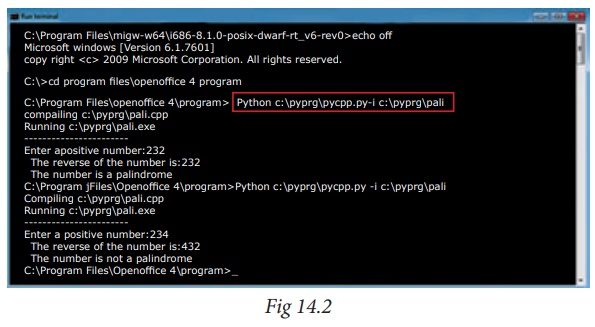 Now let us will see how to write the Python program for compiling C++ code.