1.    Give two applications of bistable multivibrators

·              Used to generate symmetrical square wave. This is possible by using triggering pulses of equal interval, corresponding to the frequency required.

·              Used for the performance of many digital operations like counting and storing of digital information.

A Comparator Circuit is used to identify the instant at which the arbitrary input waveform attains a particular reference level. Basically it is a clipper circuit. A simple diode comparator and its equivalent circuit is given as

The electronic circuits which are used to clip off the unwanted portion of the waveform, without distorting the remaining part of the waveform are called clipper circuits.

4.    What is the 'tilt' applicable to RC circuits? Give an expression for tilt.

In high pass RC network, Tilt is defined as the decay in the amplitude of the output voltage waveform, when the input maintains its level constant.

Percentage of tilt is given by 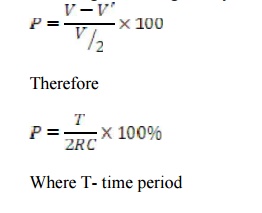 5.    What type of distortion is observed in astable multivibrator?

It can be seen that, in the collector waveforms shown in the figure there is certain distortion present. Instead of [Vc1, Vc2] exact square wave, we are getting the vertical rising edges little bit rounded. This is called rounding. For a square wave output such a rounding is undesirable and must be eliminated.

The electronic circuits which are used to add a dc level as per the requirement to the ac output signal are called clamper circuits.

It is also known as dc inserter or dc restorer.

· It is used as a amplitude comparator

· It can be used as a squaring circuit.

An astable multivibrator is called free running multivibrator because it generates square waves of its own without any external triggering pulse.

9.    Define the threshold points in a Schmitt trigger circuit.

·              When the input voltage goes below this level, the output will switch. These threshold voltage levels are called threshold points.

10. What is a regenerative comparator? Give example circuit.

A small amount of the output voltage is effectively added to the input voltage before it is compared to a fixed threshold. So it uses positive (or) regenerative feedback.

12.      Why Monostable multivibrator is also called as delay circuit?

Used to introduce time delay as gate width is adjustable.

13.      Determine the value of capacitors to be used in an astable multivibrator to provide a train of pulse of 4 μs wide at a repetition rate okf 80KHz if R1=R2=10K.

16.      In a low pass RC circuit, rise time is 35 nano seconds. What is the bandwidth that can be obtained using the circuit?

17.      Determine the value of capacitors to be used in an astable multivibrator to provide a train of pulse 2µs wide at a repetition rate of 75KHz with R1=R2=10KHz.