The type of circuit most often used to generate square or rectangular waves is the multivibrator. A multivibrator, is basically two amplifier circuits arranged with regenerative feedback.

The type of circuit most often used to generate square or rectangular waves is the multivibrator. A multivibrator, is basically two amplifier circuits arranged with regenerative feedback. One of the amplifiers is conducting while the other is cut off When an input signal to one amplifier is large enough, the transistor can be driven into cutoff, and its collector voltage will be almost V CC. However, when the transistor is driven into saturation, its collector voltage will be about 0 volts.

A circuit that is designed to go quickly from cutoff to saturation will produce a square or rectangular wave at its output. This principle is used in multivibrators. Multivibrators are classified according to the number of steady (stable) states of the circuit. A steady state exists when circuit operation is essentially constant; that is, one transistor remains in conduction and the other remains cut off until an external signal is applied.

The three types of multivibrators :

The astable circuit has no stable state. With no external signal applied, the transistors alternately switch from cutoff to saturation at a frequency determined by the RC time constants of the coupling circuits.

The monostable circuit has one stable state; one transistor conducts while the other is cut off. A signal must be applied to change this condition. After a period of time, determined by the internal RC components, the circuit will return to its original condition where it remains until the next signal arrives.

A multivibrator which generates square waves of its own (i.e. without any external trigger pulse) is known as astable multivibrator. It is also called free ramming multivibrator. It has no stable state but only two quasi-stables (half-stable) makes oscillating continuously between these states. Thus it is just an oscillator since it requires no external pulse for its operation of course it does require D.C power.

In such circuit neither of the two transistors reaches a stable state. It switches back and forth from one state to the other, remaining in each state for a time determined by circuit constants. In other words, at first one transistor conducts (i.e. ON state) and the other stays in the OFF state for some time. After this period of time, the second transistor is automatically turned ON and the first transistor turned OFF. Thus the multivibrator will generate a square wave of its own. The width of the square wave and it frequency will depend upon the circuit constants. 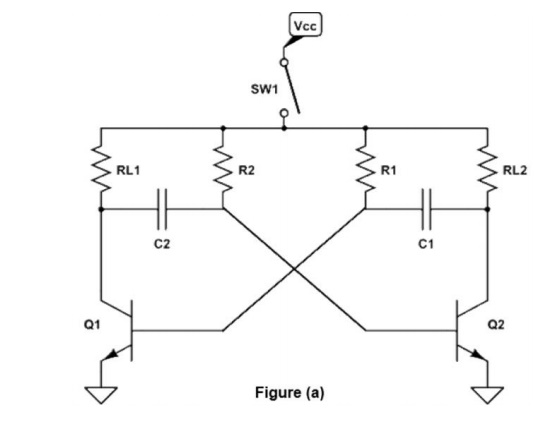 It consists of two common emitter amplifying stages. Each stage provides a feedback through a capacitor at the input of the other. Since the amplifying stage introduces a 180o phase shift and another 180o phase shift is introduced by a capacitor, therefore the feedback signal and the circuit works as an oscillator. In other words because of capacitive coupling none of the transistor can remain permanently out-off or saturated, instead of circuit has two quasi-stable states (ON and OFF) and it makes periodic transition between these two states.

The output of an Astable multivibrator is available at the collector terminal of the either transistors as shown in figure (a). However, the two outputs are 180o out of phase with each other. Therefore one of the outputs is said to be the complement of the other.

Let us suppose that

When the D.C power supply is switched ON by closing S, one of the transistors will start conducting before the other (or slightly faster than the other). It is so because characteristics of no two similar transistors can be exactly alike suppose that Q1 starts conducting before Q2 does. The feedback system is such that Q1 will be very rapidly driven ton saturation and Q2 to cut-off. The circuit operation may be explained as follows.

Since Q1 is in saturation whole of VCC drops across RL1. Hence VC1 = 0 and point A is at zero or ground potential. Since Q2 is in cut-off i.e. it conducts no current, there is no drop across R L2. Hence point B is at VCC. Since A is at 0V C2 starts to charge through R2 towards VCC.

When voltage across C2 rises sufficiently (i.e. more than 0.7V), it biases Q2 in the forward direction so that it starts conducting and is soon driven to saturation.

VCC decreases and becomes almost zero when Q2 gets saturated. The potential of point B decreases from VCC to almost 0V. This potential decrease (negative swing) is applied to the base of Q1 through C1. Consequently, Q1 is pulled out of saturation and is soon driven to cut-off.

Since, now point B is at 0V, C1 starts charging through R1 towards the target voltage VCC.

When voltage of C1 increases sufficiently. Q1 becomes forward-biased and starts conducting. In this way the whole cycle is repeated.

It is observed that the circuit alternates between a state in which Q1 is ON and Q2 is OFF and the state in which Q1 is OFF and Q2 is ON. This time in each state depends on RC values. Since each transistor is driven alternately into saturation and cut-off. The voltage waveform at either collector (points A and B in figure (b)) is essentially a square waveform with peak amplitude equal to VCC.

Calculation of switching times and frequency of oscillations:

The frequency of oscillations can be calculated by charging and discharging capacitances and its base resistance RB.

The voltage across the capacitor can be written as

Frequency of free running multivibrator is given by

the frequency stability of the circuit is not good as only the function of the product of RC but also depends on load resistances, supply voltages and circuit parameters. In order to stabilize the frequency, synchronizing signals are injected which terminate the unstable periods earlier than would occur naturally.

The bistable multivibrator has two absolutely stable states. It will remain in whichever state it happens to be until a trigger pulse causes it to switch to the other state. For instance, suppose at any particular instant, transistor Q1 is conducting and transistor Q 2 is at cut-off. If left to itself, the bistable multivibrator will stay in this position for ever. However, if an external pulse is applied to the circuit in such a way that Q1 is cut-off and Q2 is turned on, the circuit will stay in the new position. Another trigger pulse is then required to switch the circuit back to its original state.

In other words a multivibrator which has both the state stable is called a bistable multivibrator. It is also called flip-flop, trigger circuit or binary. The output pulse is obtained when, and why a driving (triggering) pulse is applied to the input. A full cycle of output is produced for every two triggering pulses of correct polarity and amplitude. 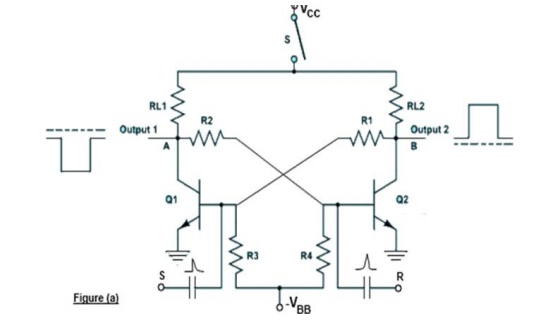 Let us suppose, if Q1 is conducting, then the fact that point A is at nearly ON makes the base of Q2 negative (by the potential divider R2 - R4) and holds Q2 off.

Similarly with Q2 OFF, the potential divider from VCC to -VBB (RL2, R1, R3) is designed to keep base of Q1 at about 0.7V ensuring that Q1 conducts. It is seen that Q1 holds Q2 OFF and Q2 hold Q1 ON. Suppose, now a positive pulse is applied momentarily to R. It will cause Q2 to conduct. As collector of Q2 falls to zero, it cuts Q1 OFF and consequently, the BMV switches over to its other state.

Similarly, a positive trigger pulse applied to S will switch the BMV back to its original state.

To change the stable state of the binary it is necessary to apply an appropriate pulse in the circuit, which will try to bring both the transistors to active region and the resulting regenerative feedback will result on the change of state.

Triggering may be of two following types:

In asymmetrical triggering, there are two trigger inputs for the transistors Q1 and Q2. Each trigger input is derived from a separate triggering source. To induce transition among the stable states, let us say that initially the trigger is applied to the bistable. For the next transition, now the identical trigger must appear at the transistor Q2. Thus it can be said that the asymmetrical triggering the trigger pulses derived from two separate source and connected to the two transistors Q1 and Q2 individually, sequentially change the state of the bistable.

Figure (b) shows the circuit diagram of an asymmetrically triggered bistable multivibrator. 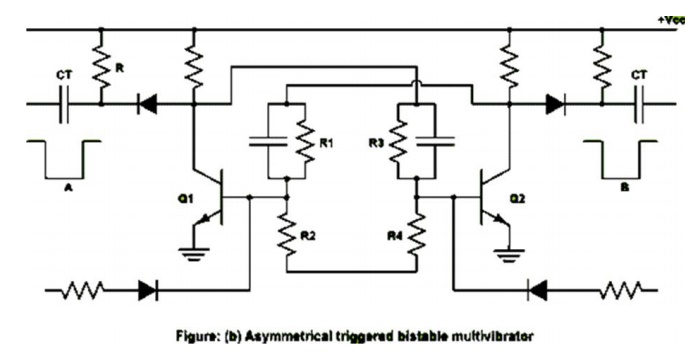 Asymmetrical triggering finds its application in the generation of a gate waveform, the duration of which is controlled by any two independent events occurring at different time instants. Thus measurement of time interval is facilitated. 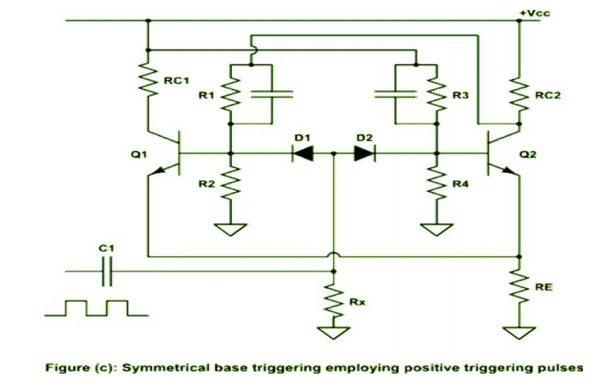 Figure (c) shows the circuit diagram of a binary with symmetrical base triggering applying a positive trigger pulses.

Diodes D1 and D2 are steering diodes. Here the positive pulses, try to turn ON and OFF transistor. Thus when transistor Q1 is OFF and transistor Q2 is ON, the respective base voltages and VB1N, OFF and V B2N, ON. It will be seen that VB1N, OFF > VB1N, ON. Thus diode D2 is more reverse-biased compared to diode D1.

When the positive differentiated pulse of amplitude greater than (VB1N, OFF + Vɣ) appears, the diode D1 gets forward biased, and transistor Q1 enters the active region and with subsequent regenerative feedback Q1 gets ON, and transistor Q2 becomes OFF. On the arrival of the next trigger pulse now the diode D2 will be forward biased and ultimately with regenerative feedback it will be in the ON state.