1. How the quality of object program is measured?

The quality of an object program is measured by its Size or its running time. For large computation running time is particularly important. For small computations size may be as important or even more.

2. What is the more accurate term for code optimization?

The more accurate term for code optimization would be “code improvement”

3. Explain the principle sources of optimization.

Code optimization techniques are generally applied after syntax analysis, usually both before and during code generation. The techniques consist of detecting patterns in the program and replacing these patterns by equivalent and more efficient constructs.

4. What are the patterns used for code optimization?

Deducing at compile time that the value of an expression is a constant and using the constant instead is known as constant folding.

8. What do you mean by inner loops?

The most heavily traveled parts of a program, the inner loops, are an obvious target for optimization. Typical loop optimizations are the removal of loop invariant computations and the elimination of induction variables.

·     Transformation must preserve the meaning of programs.

·     Transformation must, on the average, speed up the programs by a measurable amount

·     A Transformation must be worth the effort.

a.     The operations needed to implement high level constructs are made explicit in the intermediate code, so it is possible to optimize them.

b.     The intermediate code can be independent of the target machine, so the optimizer does not have to change much if the code generator is replaced by one for a different machine

A transformation of a program is called Local, if it can be performed by looking only at the statements in a basic block otherwise it is called global.

Give examples for function preserving transformations.

An occurrence of an expression E is called a common subexpression, if E was previously computed, and the values of variables in E have not changed since the previous computation.

A variable is live at a point in a program if its value can be used subsequently otherwise, it is dead at that point. The statement that computes values that never get used is known Dead code or useless code.

Reduction in strength is the one which replaces an expensive operation by a cheaper one such as a multiplication by an addition.

19. What is meant by loop invariant computation?

An expression that yields the same result independent of the number of times the loop is executed is known as loop invariant computation.

A typical equation has the form

and can be read as, “ the information at the end of a statement is either generated within

the statement, or enters at the beginning and is not killed as control flows through the statement”. Such equations are called data flow equations.

The two standard allocation strategies are

In static allocation the position of an activation record in memory is fixed at run time.

·     A tree which depicts the way of control enters and leaves activations.

i.     Each node represents an activation of an procedure

ii.     The root represents the activation of the main program.

iii.     The node for a is the parent of the node for b , if and only if control flows from activation a to b

34. Give the structure of general activation record 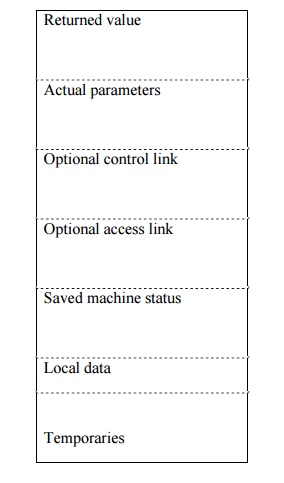 In stack allocation a new activation record is pushed on to the stack for each execution of a procedure. The record is popped when the activation ends.

Space left unused due to alignment consideration is referred to as padding.

·     The size of a data object and constraints on its position in memory must be known at compile time.

·     Recursive procedure are restricted, because all activations of a procedure use the same bindings for local name

·     A return sequence restores the state of the machine so that calling procedure can continue execution.

·     A dangling reference occurs when there is storage that has been deallocated.

·     It is logical error to use dangling references, since the value of deallocated storage is undefined according to the semantics of most languages.

·     Lexical or static scope rule determines the declaration that applies to a name by a examining the program text alone.

·     Dynamic scope rule determines the declaration applicable to name at runtime, by considering the current activations.

·     A block is a statement containing its own data declaration.

·     An access link is a pointer to each activation record which obtains a direct implementation of lexical scope for nested procedure.

·     The term environment refers to a function that maps a name to a storage location.

·     The term state refers to a function that maps a storage location to the value held there.