The step signal is a signal whose value changes from zero to A at t= 0 and remains constant at A for t>0.

The ramp signal is a signal whose value increases linearly with time from an initial value of zero at t=0.the ramp signal resembles a constant velocity.

The transient response is the response of the system when the system changes from one state to another.

The steady state response is the response of the system when it approaches infinity.

Damping ratio is defined as the ratio of actual damping to critical Damping.

The time domain specifications are

10. What will be the nature of response of second order system with different types of damping?

For undamped system the response is oscillatory.

For under damped system the response is damped oscillatory.

For critically damped system the response is exponentially rising.

The time taken for response to raise from 0% to 100% for the very first time is rise time.

The time taken for the response to reach the peak value for the first time is peak time.

16. What is the need for a controller?

The controller is provided to modify the error signal for better control action.

17. What are the different types of controllers?

The different types of the controller are

18. What is proportional controller?

It is device that produces a control signal which is proportional to the input error signal.

21. What is the significance of integral controller and derivative controller in a PID controller?

The steady state error is the value of error signal e(t) when t tends to infinity.

23. What is the drawback of static coefficients?

The main drawback of static coefficient is that it does not show the variation of error with time and input should be standard input.

24. What are the three constants associated with a steady state error?

25. What are the main advantages of generalized error co-efficients?

i) Steady state is function of time.

ii)  Steady state can be determined from any type of input.

26. What are the effects of adding a zero to a system?

Adding a zero to a system results in pronounced early peak to system response thereby the peak overshoot increases appreciably.

27. Why derivative controller is not used in control system?

28. What is the effect of PI controller on the system performance?

The PI controller increases the order of the system by one, which results in reducing the steady state error .But the system becomes less stable than the original system.

29. What is the effect of PD controller on system performance?

The effect of PD controller is to increase the damping ratio of the system and so the peak overshoot is reduced.

30. What is the disadvantage in proportional controller?

The disadvantage in proportional controller is that it produces a constant steady state error. 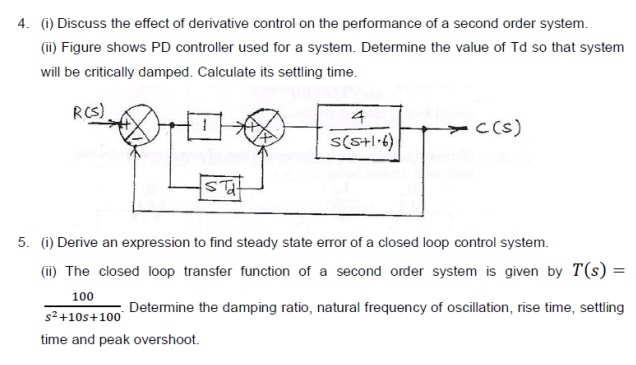 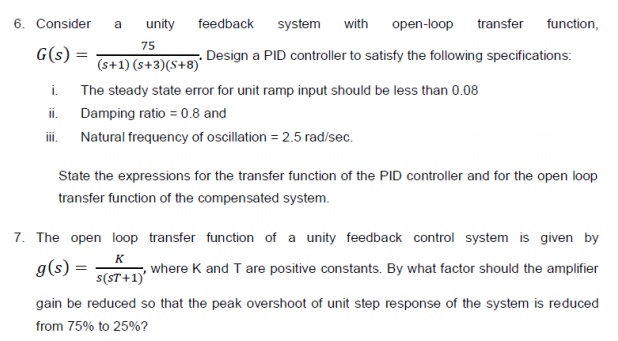 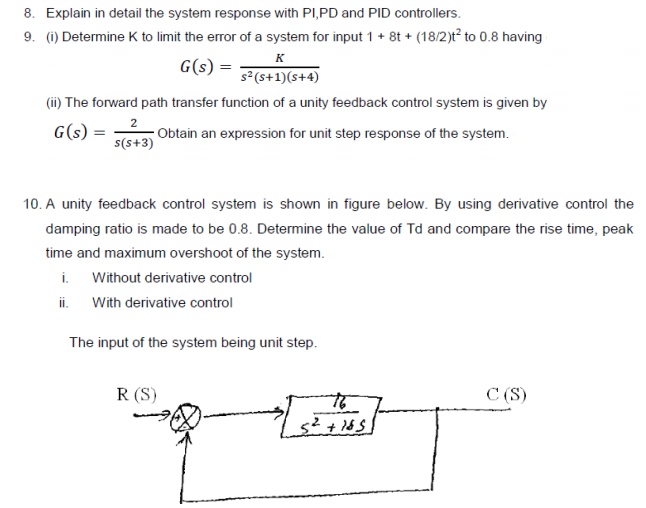