The performance of a system is usually evaluated in terms of the following qualities. . How fast it is able to respond to the input.

The performance of a system is usually evaluated in terms of the following qualities. . How fast it is able to respond to the input.

o   How fast it is reaching the desired output

o   What is the error between the desired output and the actual output, once the transients die down and steady slate is achieved

o   Does it oscillate around the desired value, and

o   Is the output continuously increasing with time or is it bounded.

o   The last aspect is concerned with the stability of the system and we would require the system to be stable. This aspect will be considered later. The first four questions will be answered in terms of time domain specifications of the system based on its response to a unit step input.

o   These are the specifications to be given for the design of a controller for a given system.

o   We have obtained the response of a type 1 second order system to a unit step input. The step

o   response of a typical underdamped second order system is plotted in Fig. 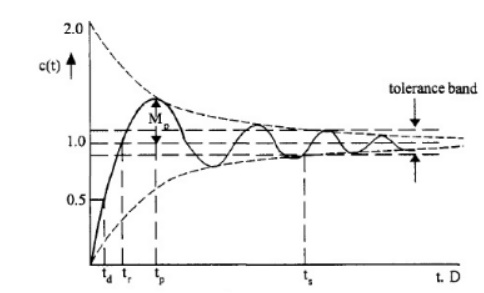 It is observed that, for an underdamped system, there are two complex conjugate poles. Usually, even if a system is of higher order, the two complex conjugate poles nearest to the j ω - axis (called dominant poles) are considered and the system is approximated by a second order system. Thus, in designing any system, certain design specifications are given based on the typical underdamped step response shown as Fig.

The design specifications are

Delay time d t : It is the time required for the response to reach 50% of the steady state value for the first time.

Peak time p t : It is the time required for the response to reach the maximum or Peak value of the response.