(ii) Detection Limit and Sensitivity, and

In atomic absorption spectroscopy (AAS) the technique using calibration curves and the standard addition method are both equally suitable for the quantitative determinations of elements.

Theoretically, the absorbance must be proportional to concentrations, however, deviations from lin-earity usually take place. Therefore, it is necessary to prepare an empirical calibration curve (ECC). For this, the standard solutions of the element(s) to be determined are employed to plot the ECC from which the contents in the ‘test solutions’ may be measured conveniently.

Figure 26.3, represents the typical calibration curves of copper at 3428 Å, where :

It is quite evident from the calibration curve (Z) in Figure 26.3, that the linearity between the concen-tration of Cu (in ppm) and absorbance prevails over the range 2.0 to 10.0 ppm specifically, whereas at higher concentrations the said relationship does not hold good anymore. Hence, it is pertinent to mention here that whenever the quantitative analysis of an element is to be carried out, the absorbance is preferably measured almost under the same experimental parameters whereby the calibration curve was initially constructed. 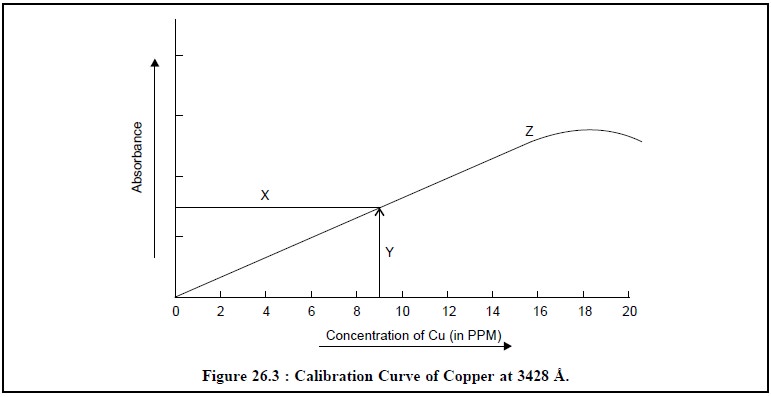 The standard addition method is widely employed in AAS. In this case, two more aliquots of the sample are transferred to volumetric flasks. The first, is diluted to volume, and the absorbance of the solution is measured. The second, receives a known quantity of analyte, whose absorbance is also measured after dilution to the same volume. Likewise, data for other standard additions may also be obtained.

If a plot between absorbance and concentration reveals a linear relationship, which may be accom-plished by several stepwise standard additions, the following expressions hold good, namely :

where,      CX = Analyte concentration in the diluted sample,

CS = Contribution of the added standard to the concentration, and

AX and AT = Measured absorbances of CX and CS.

When a number of stepwise additions are performed, AT can be plotted against CX. Thus, the resulting straight line may be extrapolated to AT = 0. By substituting this value in Eq. (c) we may have at the intercept :

Advantage : The major plus points of the standard addition method is that it tends to compensate for variations caused by physical and chemical interferences in the sample solution.

Detection Limit : It may be defined as the concentration (meg ml–1) of an element that gives rise in the shifting of absorbance signal to an amount which equals to the peak-to-peak noise of the base-line.

Sensitivity : It may be defined as the concentration of element present in the sample solution that produces 1% absorption.

From the above definition it is quite evident that the sensitivity takes no cognizance of the noise-level of the base-line, therefore, it is more or less of no use as a definite guide to the least quantity of an element which may be estimated. However, the sensitivity of a 1% absorption-is a pure theoretical number only that would undergo a change solely depending on the efficiency of the lamp (hollow-cathode-lamp), atomizer, flame-system employed, monochromator (prism, grating used), and finally the photomultiplier used.

The sensitivity for 1% absorbance is determined by the help of the expression given below :

C1% = Concentration that yields 1% absorption, and

C0.1 = Concentration that yields an absorption of 0.1

Sensitivity is usually expressed in terms of mcg ml–1 for 1% absorbance.

It is an usual practice to perform an actual-test-run over a sufficiently large range by employing the necessary prevailing expansion facility so as to ascertain fully whether or not the atomic absorption tech-nique is reasonably applicable to a specific low-level estimation. Such a data may ultimately reveal the exact and true detection limit which is normally equals to twice the noise level.

In general, atomic absorption methods are subject to three types of interferences, namely :

The different interferences shall be discussed briefly below :

This type of interference normally takes place when the absorption of an interfering species either overlaps or lies very near to the analyte absorption, with the result that resolution by the monochromator almost becomes impossible, Hollow-cathode-source invariably give rise to extremely narrow emission-lines, hence interference caused due to overlap of atomic spectral lines is rather rare.

A few typical examples of spectral interferences are given below :

(a) Spectral interferences caused either by the combustion products which show broad-band absorp-tion or the particulate products which scatter radiation. In fact, both these products distinctly lower the power of the transmitted beam of light and ultimately give rise to positive analytical errors.

(a) When the source of the combustion or particulate products is the full and oxidant mixture alone, then a blank is aspirated into the flame and the necessary corrections are effected from the observed absorbances.

(b) Spectral interferences may be produced due to an emission line of another element, radical or molecule and also by unresolved band spectra. Here, the lines are read together proportionately to the extent of overlap if the spectral band after passing through the monochromator allows the undersired radiation to reach the photoreceptor finally.

Remedy : The overlapping of this nature may be eliminated either by prior chemical separation or by selection other spectral lines.

(c) Sample Matrix : A relatively more complex and troublesome problem is usually faced when the source of scattering originates right in the sample matrix itself. In such a situation, it has been noticed that the power of the transmitted beam-designated as P, is reduced by the nonanalyte components, whereas the incident beam power-designated as Po, is not ; thereby resulting in a positive error in absorbance and hence in concentration.

Example : Determination of Barium in alkaline-earth mixtures affords a potential matrix interference due to absorption. It has been observed that an intense and useful absorption line for barium atoms, occurring at 553.6 nm, lies in the centre of a broad absorption band for Ca (OH)2, that extends from 540 to 560 nm.

Remedy : (1) The effect due to sample matrix is quickly and effectively eliminated by replacing nitrous oxide for air as the oxidant for the acetylene, whereby the higher temperature completely decomposes the Ca (OH)2 and eliminates the absorption band.

(2) If the source of interference is known, an excess of the interfering substance may be added to the sample as well as the standards ; provided the ‘excess’ is sufficient enough with respect to the concentration from the sample matrix, the concentration of the latter will thus become insignificant. Such an added sub-stance is sometimes referred to as a radiation buffer.

In usual practice, the chemical interferences are found to be more common than the spectral interfer-ence. However, their effects may very often be minimized by appropriate choice of experimental parameters.

Examples : (i) Chemical Interferences due to Anion (PO43–) : Phosphate ions have been found to interfere with determination of Mg and Ca by AAS. The absorption due to Mg and Ca are appreciably weaker in the presence of PO43– ions than in their absence. This is evidently on account of the formation of fairly stable phosphates of Mg and Ca which do not readily split-up into the respective atoms in the mantle of a flame.

Remedy : The addition of an excess of strontium (Sr), or lanthanum (La), or thorium (Th) ion remark-ably minimizes the interference of PO43– ion in the determination of Mg, and Ca by replacing the analyte in the analyte in the compound formed with the respective interfering species. In short, these ions do combine preferentially with PO43– ions.

Protective Agents : These agents are found to inhibit the interferences by virture of their ability to form relatively stable but volatile species with the respective analyte. There are three reagents that are em-ployed commonly for this purpose, namely :

(c) Ammonium salt of 1-pyrrolidinecarbodithioic acid (APDC). EDTA helps to eliminate the inter-ferences of Al3, Si4+, PO43– and SO42– in the determination of Ca.

It has been observed that the ionization of atoms or molecules is comparatively very small in magni-tude in combustion mixtures which essentially involve air as the oxidant and, therefore, may be ignored and neglected. Consequently, the substitution of air with either oxygen or nitrous oxide, however, gives rise to temperatures which are high enough to cause appreciable ionization., Hence, as a consequence of the at-tained equilibrium-a fairly significant concentration of electron exists as shown below :

where,   M = Neutral atom or molecule,

M+ = Its corresponding ion, and

Hence, if the medium has the species B in addition to species M, and if the former ionizes according to the following equation :

then the extent of ionization of the latter will be minimized substantially be the Law of Mass Action of the electrons originated from the former species (i.e., B).

Example : The intensity of atomic absorption lines for the alkali metals, such as : potassium (K) ; rubidium (Rb) ; and caesium (Cs), is found to be affected by temperature in a complex way. Under certain experimental parameters a noticeable decrease in absorption may be observed in hotter flames. Hence, lower excitation temperatures are invariably recommended for the analysis of alkali metals.

Remedy : The resulting effects of shifts in ionization equilibrium may be eliminated effectively by the addition of an ionization suppressor, that promptly gives a comparatively high concentration of electrons to the flame. This ultimately results in the suppression of ionization by the respective analyte.