The atomic absorption spectrophotometers are essentially of two types, namely :

(a) Single-beam Atomic Absorption Spectrophotometer, and

These two instruments shall be discussed briefly here along with their vital components.

The schematic diagram of a single-beam atomic spectrophotometer in illustrated in Figure 26.1. 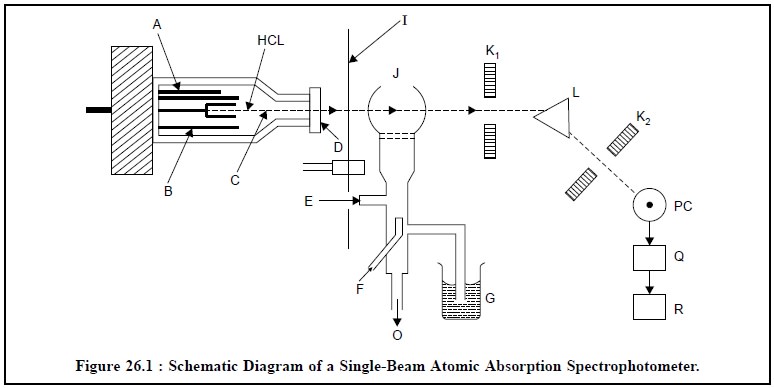 G = Liquid sample sucked in by an atomizer,

I = Chopper (a rotating shutter),

O = Drain outlet to maintain a constant pressure head in the mixing chamber,

The most common source for atomic absorption measurements in the ‘hollow-cathode-lamp’, which essentially consists of a Tungsten anode (A) and a cylindrical cathode (HCL) sealed in a glass tube (B) that is duly filled with neon or Argon (C) at a pressure of 1 to 5 torr. It is a practice to have the cathode constructed of the metal whose spectrum is desired or serves to support a layer of that particular metal. The chopper* (I) is interposed between the hollow-cathode-lamp (HCL) and the flame (J). Subsequently, the liquid sample (G) is sucked in by an atomizer into the flame (J). Just prior to its entry to the flame, the sample solution first gets dispersed into a mist of very small droplets that evaporates in the flame to yield initially the dry salt, and subsequently the vapour of the salt. At this particular stage a portion of this vapour will be dissociated into atoms of the element required to be measured. In this manner, the flame possesses free ground state (i.e., unexcited) atoms that are worthy of absorbing radiations, from an external source when the radiation eventu-ally matches exactly to the energy needed for a transition element from the lower ground-state-level to the upper excited-state-level. The resulting unabsorbed radiation from the flame (J), firstly passes through the slit (K1) and then through the monochromator i.e., the prism or grating (L) that exclusively isolates the exciting spectral lines of the light source ; secondly, through the slit (K2) into the photocell (PC), thirdly, into a photodetector (Q) and fourthly, its output is adequately amplified and registered on a recorder (R). It is worthwhile to mention here that the final absorption is measured by the difference in the transmitted signal both in the absence and presence of the element under investigation.

The major disadvantage of a single-beam atomic absorption spectrophotometer (Figure 26.1) lies in its very low stability. The introduction of a double-beam atomic absorption spectrophotometer (Figure 26.2) has completely eliminated the above main lacuna and provides much enhanced stability. In this particu-lar instance the chopped beam of light from the hollow-cathode-lamp is split into two parts. The first portion, passes through the flame, while the second portion is made to bypass the flame completely. However, the two separate beams of light are recombined meticulously by an unique optically-designed assembly, passes through a monochromator to a strategically placed detector and ultimately to a sensitive read-out device.

It is pertinent to mention here that a double-beam atomic absorption spectrophotometer is absolutely independent of (a) lamp drift, (b) sensitivity of detector with time.

The optical path of a double-beam atomic absorption spectrophotometer is depicted in Figure 26.2. The various essential components comprising the optical arrangement in Figure 26.2 are enumerated after the figure. 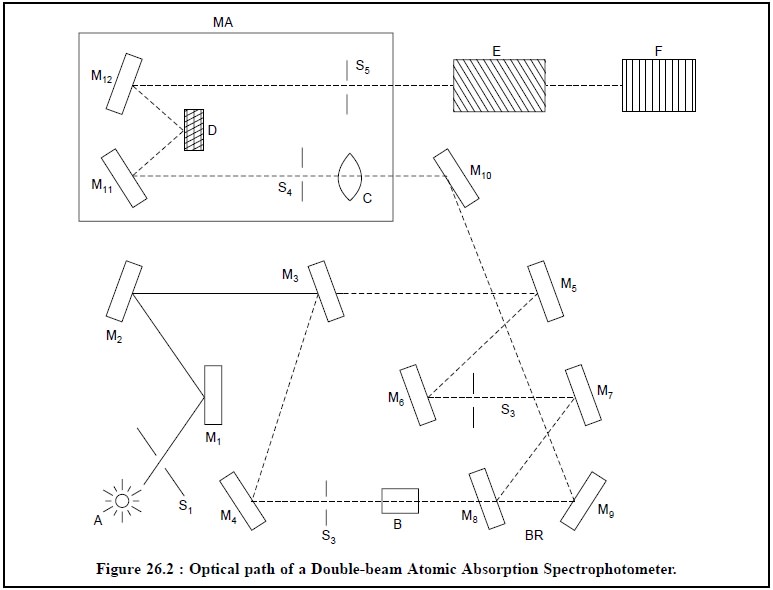 A = Source of light (Hollow-Cathode-Lamp),