Human kidneys play an integral role in the development of primary or secondary immunologic diseases. As a major filter-ing organ, the kidneys, which represent about 0.5 percent of the human body mass, receive 20 percent of the total cardiac out-put.

Human kidneys play an integral role in the development of primary or secondary immunologic diseases. As a major filter-ing organ, the kidneys, which represent about 0.5 percent of the human body mass, receive 20 percent of the total cardiac out-put. The enormous blood flow (1 L/min) to the renal microcirculation exceeds that observed in other major vascular organs (heart, liver, and brain). Urine is produced after a complex process of glomerular fil-tration, tubular transport, and reabsorption at a rate of 1 ml/min. Cellular elements involved in immunity thereby have a high probability of interacting with glomeru-lar and tubular cells that may or may not cause renal disease.

Sufficient knowledge of the anatomy and histology of the kidney is vital in understanding the pathogenesis of renal diseases. The renal corpuscle, or glomeru-lus (Figure 17.1), is composed of capillary tuft lined by a thin layer of endothelial cells; central region of mesangial cells and its surrounding matrix; and visceral and parietal epithelial cells with their respec-tive basement membranes. The glomeru-lus is primarily responsible for production of ultrafilrate from the circulating plasma. The filtration barrier between the blood-stream and urinary space is made up by the fenestrated endothelium, the glomeru-lar basement membrane (GBM), and the slit pores seen between the foot processes of the visceral epithelium (Figure 17.2). 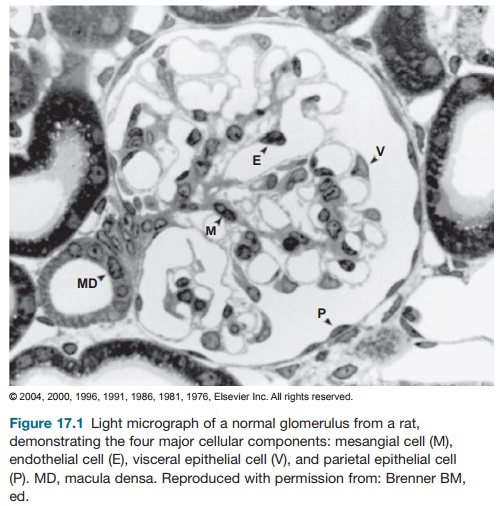 The endothelial cells form as initial barriers to cellular elements of the blood (red blood cells, leucocytes, and platelets) in reaching the subendothelial space. The endothelial cells produce nitric oxide (a vasodilator) and endothelin-1 (a potent vasoconstrictor), chemical substances implicated in inflammatory processes. The surface of the endothelial cells is negatively charged, which may contribute to the charge-selective properties of the glomeru-lar capillary wall.

The GBM is composed of a central dense layer called the lamina densa and two thin layers called the lamina rara externa and lamina rara interna. The GBM is formed by the fusion of the endothelial and epithe-lial basement membrane during develop-ment. Biochemical analyses of the GBM have identified the presence of glycopro-teins (type IV collagen, laminin, fibronec-tin, and endotactin/nidogen) and heparan sulfate proteoglycans (perlecan and agrin). Type IV collagen is the major constituent of the GBM. Gene mutations involving those encoding α3, α4, and α5 isomeric chains of the type IV collagen can cause Alport’s syndrome. This is a progressive form of glomerulopathy associated with ocular abnormalities, hearing loss, and microscopic hematuria. Electron micro-scopic examination shows thinning of the GBM in early stages of the disease. With progression of the renal disease, there is a longitudinal splitting of the GBM, produc-ing a laminated appearance. 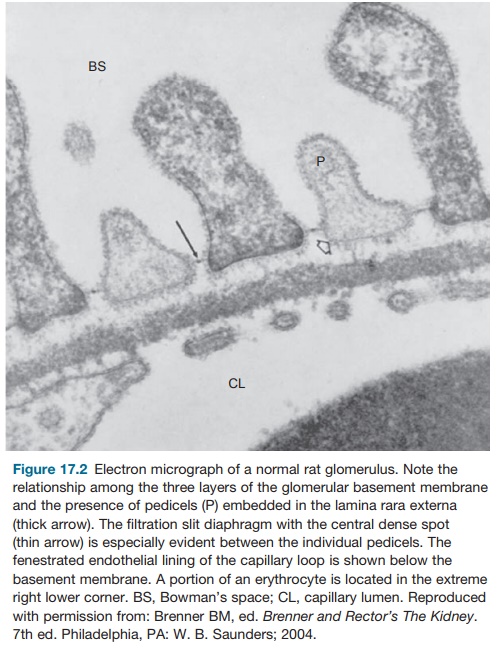 The visceral epithelial cells, or podo-cytes, wrap around individual capillary loops to form pedicels, or foot processes, that come in direct contact with the lam-ina rara externa of the GBM. The gaps between the podocytes become the slit pore, which is bridged by a thin mem-brane called filtration slit membrane, or slit diaphragm (Figure 17.2). It appears that two membrane proteins, nephrin and CD2-associated protein (CD2AP), are involved in maintaining the integrity of the filtra-tion slit membrane. The CD2AP has been identified as an adapter molecule that binds nephrin to the cytoskeleton of the GBM. Deletion of the CD2AP is known to cause congenital nephrotic syndrome with morphologic evidence of effacement or fusion of foot processes. Other mem-brane proteins like the human glomerular C3b receptor, Heymann nephritis antigen (gp330 or megalin) and podoplanin have been associated with the visceral epithelial cells.

Animal experiments that cause efface-ment or fusion of foot processes (such as injection of antipodoplanin IgG antibod-ies in rats) or disruption of the negatively charged GBM causes proteinuria. In addi-tion, visceral epithelial cells are capable of endocytosis, can synthesize and maintain the GBM, and produce prostaglandins.

Mesangial cells are specialized peri-cytes with functional properties similar to that of smooth muscle cells. In addition to providing structural support for the glo-merular capillary loop, its contractile prop-erties help regulate glomerular filtration. The presence of actin and myosin allows the mesangial cells to contract in the pres-ence of vasoactive agents like angiotensin II, vasopressin, norepinephrine, leukotri-enes, thromboxanes, and platelet-activat-ing factors. However, prostaglandins, atrial peptides, and dopamine cause mesangial relaxation. The surrounding mesangial matrix consists of glycosaminoglycans, fibronectins, laminin, and other collagens. The presence of cell surface receptors in the matrix (e.g., β-integrin receptor) are impli-cated in signal transduction mechanisms that promote synthesis of various inflam-matory cytokines, vasoactive substances, and growth factors. Finally, mesangial cells have phagocytic properties. During endocytosis of immune complexes, intra-cellular production of prostaglandins and reactive oxygen species cause injury to the glomerulus.

Parietal cells are squamous cells that make up the epithelium that forms the outer wall of the Bowman’s capsule. At the vascular pole, the parietal epithelium is continuous with the visceral epithelium. At the urinary pole, there is a transition to the cuboidal cells of the proximal tubule. The exact role of parietal cells is not well defined. However, as pointed out by Brenner (2004), these cells can proliferate and become crescents like in rapidly pro-gressive glomerulonephritis (RPGN).