A unique difficulty in developing treatment strategies and pathogenic theories of neu-rological immune diseases is that often the human end organ is unavailable for study.

A unique difficulty in developing treatment strategies and pathogenic theories of neu-rological immune diseases is that often the human end organ is unavailable for study. The morbidity of taking CNS tissue purely for research places that option beyond ethical boundaries in most cases. There-fore, reliance is mainly on autopsy mate-rial, when usually only end-stage disease pathology is available, keeping the natural history of the disease unknown. Therefore, reliance on animal models in these diseases

is paramount in testing treatment strate-gies and theories of etiology. Controversy arises when one considers how closely the animal model follows the human dis-ease state under study. The animal model should reflect the susceptibility of the host, and the clinical findings of the disease, and should be similar to the histopathological findings in the human.

MS and EAE provide good examples of strengths and difficulties of animal models based on differences between human and murine immunology. For example, in EAE IFN-γ was demonstrated in several studies to be a protective cytokine. Antibodies to the cytokine exacerbated EAE, possibly by blocking induction and activation of sup-pressor activity. However, when this prin-ciple was applied to patients, the study was discontinued because of exacerbation of MS by administration of IFN-γ in a clinical trial.

IFN-α is another example of differ-ing cytokine responses. In humans, this cytokine is secreted by several types of cells, inclining macrophages in response to exposure to viral antigens. The cyto-kine induces T cells to TH1 development, a process that depends on signal transducer and transcription-4 (STAT-4) activation. In mice, however, INF-α dose not activate STAT-4, therefore; TH1 is not induced by IFN-α. Multiple other differences abound in the immune systems between mice and humans; therefore, responses to treatment protocols in models compared with human disease may vary greatly.

Differences in the immunology of mice and human are numerous (see Table 16.2). For example, in delayed-type hypersensi-tivity (DTH) in humans, neutrophils are the first responders, followed by a mix of mononuclear cells composed of T cells and macrophages. In mice, there are relatively 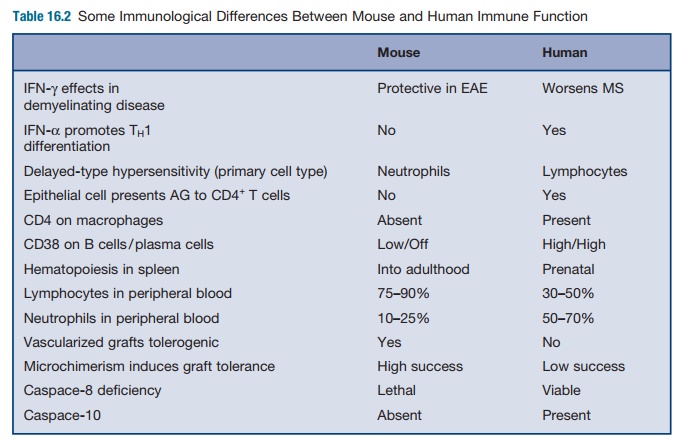 far fewer neutrophils in the peripheral blood system than in humans. However, the murine response to antigens in DTH is richer in neutrophils compared with humans and a far greater amount of anti-gen is needed to elicit a response.

Human endothelial cells are now believed to be antigen-presenting cells to memory CD4+ and CD8+ T lymphocytes. This is not the case for CD8+ cells in mice. Therefore, in humans, antigen transport to lymphoid tissue by Langerhans cells may not be required for DTH, and the endothelial cells may locally trigger a response to antigen. The peripheral lym-phoid system would be required in mice for DTH, compared with local presentation in humans.

Human and mouse endothelial cells both express MHC class I molecules, but only humans express class II, as well as CD40, ICOS ligand 50, and CD58. This has practical interactions in terms of the response to transplantation, where mice may readily adapt to vascularized graphs, whereas humans rapidly reject them. This is also felt to be secondary to the ability of human endothelial cells to present antigen compared with mice.

The mouse and human immune systems are felt to have diverged 65 mil-lion years ago, although thus far, only 300 genes are felt to be unique to each spe-cies. The adaptations were in response to various pathological challenges based on ecological niche. For example, that mice are closer to the ground would change the exposure and response to microor-ganisms encountered. Even the differ-ence in life spans would account for the difference in the immune response. For example, transit times of immune cells are different between mice and humans and a larger T-cell and B-cell repertoire must be continued for many years in humans. Humans would encounter more somatic mutations over time, and greater control of the immune system must be generated to control for autoimmunity and to con-trol larger, widely varied antigen-specific clones.

Thus, one can see multiple reasons for often wide discrepancies between animal models and the human condition, particu-larly in the response to potential therapeu-tic treatments. Perhaps the focus of effort and funding should be placed on direct human studies, whether on the molecular, tissue, or organism level, to unravel the designs of these diseases.