MG is an autoimmune disease that causes muscle weakness believed to be primar-ily mediated by antibodies to the acetyl-choline receptor (AChR) on the motor endplate of muscles.

MG is an autoimmune disease that causes muscle weakness believed to be primar-ily mediated by antibodies to the acetyl-choline receptor (AChR) on the motor endplate of muscles (Figure 16.3). There are four criteria that meet the definition of an antibody-mediated autoimmune disease and MG meets all of them. First, the presumed antibody is present in 80 to 90 percent of patients. Second, the clinical syndrome can be passively transferred to an animal model. Third, injection of the human antigen, in this case the AChR into an animal can produce a model of the dis-ease. Fourth, an improvement in the clinical disease state is associated with a decrease in antibody levels. 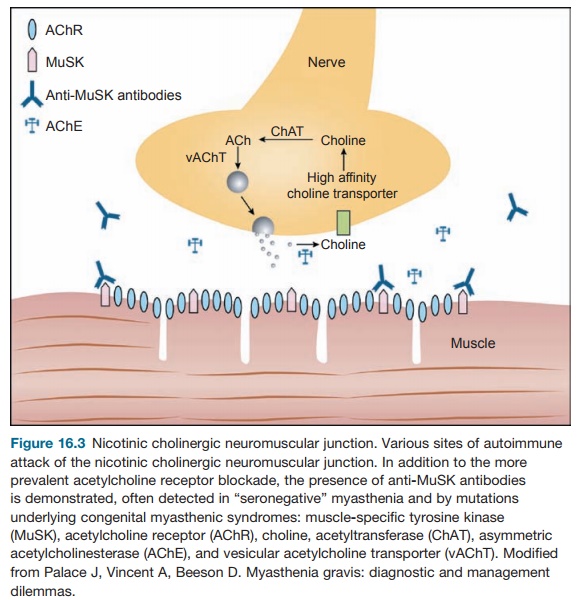 In the case of MG, a major diagnostic test after physical exam would be to assay for the AChR antibody. The more severe the clinical manifestation, the more likely the antibody will be detected and is diag-nostic of the illness. However, absence of the antibody does not exclude MG (see discussion about seronegative MG). Clinically, these patients present with a muscle weakness only, associated with demonstrable fatigability of the muscles on exam. For instance, if the extraocular muscles are involved, weakness can be detected by the development of lid pto-sis or drooping when having the patient sustain an upward gaze. Patients usually report a decrease in strength later in the day, a hallmark symptom of this disease, rather than uniform weakness through-out the day. Weakness often begins in the ocular muscles producing double vision or a drooping lid but can go on to cause weakness of the muscles of speech and swallowing (bulbar MG) as well as the extremities. The respiratory muscles can be affected later on, in the setting of a “myasthenic crisis,” which can be life threatening.

In infants, congenital myasthenia occurs from transplacental passage of anti-bodies from a woman with MG or may be caused by a mutation of the neuromuscu-lar junction itself. It is accepted as conven-tional wisdom in the medical community that MG is antibody mediated because an autoantibody specifically reactive to the acetylcholine receptor in the neuromus-cular junction is present in 80–90 percent of patients. Reduction of this antibody is associated with improvement in clinical symptoms. A decrease in the number of acetylcholine receptors has been shown to occur directly because of binding of anti-body to the receptors, possibly by cluster-ing these receptors. These receptors may be destroyed ultimately via the activation of the complement system.

Patients usually present with hip girdle weakness, which is more notable in the morning and improves with exercise and over the course of the day. Autonomic dysfunction is also found in addition to muscle weakness.

Animal models for myasthenia gravis can be produced by injecting the human antigen or by passively transferring the disease to an animal by injection of the antibodies. However, the antibodies are far from homogeneous. The subtypes of anti-bodies may vary among patients and even among muscles within the same patient. The antibody may also have variations in light chain type and subclass within one patient. Most likely these variations are due to the receptor on the muscle, which consists of five subunits. These subunits associate to form a transmembrane ion channel. It is likely that the populations of B lymphocytes, producing the receptor antibodies, are also heterogeneous.

T lymphocytes are also felt to play an important role in MG, although they are not found in biopsy specimens. Their main function in this setting might be to stimu-late the B cells. It has been demonstrated that anti-T-cell antibodies may be used for immunoregulation in this disease. The naturally occurring anti-T-cell receptor (anti-V beta 5.1) IgG antibody is found to occur in those patients with milder disease and less so in more severe MG. Although this antibody occurs in higher titers in MG patients than in controls, the higher the antibody titer, the less severe are the clinical symptoms, suggesting that therapy targeting pathogenic T-cell receptors (TCRs) may be a useful avenue of exploration.

The thymus gland has been considered to be the source of the autoimmune state of patients with MG. Most patients with MG have thymic hyperplasia and 10 to 12 per-cent have a thymoma. The thymus gland contains myoid-type cells, which have striations and acetylcholine receptors. The thymic cells may act as antigen-present-ing cells with MHC class II molecules. Cathepsin V, an enzyme responsible for cleaving the invariant chain in the antigen-presenting cleft of the MCH II molecule is overexpressed in MG patients in the thy-mic tissue and in the thymoma when pres-ent. However, mRNA and cathepsin V pro-tein are not expressed in patients who have a thymoma but do not have MG. Patients who have thymoma also may have anti-bodies directed against muscle antigens as titin or the ryanodine receptor in addition to the acetylcholine receptor.

The thymus gland may also play a role because of the presence of acetylcho-line receptor on the myoid cells. Theories include the possibility that a virus might alter the myoid cells, and the proximity to the antigen presenting cells and helper T cells in the gland increases the possibil-ity of an autoimmune response. Molecular mimicry may play a role as well.

Herpes viruses and bacteria have been shown to share cross-reactivity with the acetylcholine receptor. A genetic pre-disposition is most likely a requisite of acquiring the disease. HLA types have been associated with MG such as HLA-B8, DRw3, and DQw2. Other autoimmune dis-eases are found to occur concomitantly in these patients or in their families such as lupus, rheumatoid arthritis, and Graves’ disease.

There is also a subset of patients (10–20 percent) with clinical MG, who do not produce antibodies to the acetyl-choline receptor. They are designated as “antibody-negative myasthenia.” This may be a misnomer. Some patients (40–70 percent) with this disorder produce anti-bodies to another antigen, the MuSK. The antibodies are of the subclass IgG4 and strongly activate complement cascade. In contrast, the ACh-R-Abs are primarily of the IgG1 and IgG3 subclasses, which can also fix complement. The MuSK antibody is also found in 10 percent of patients with antibody-positive MG, or alone without the AChR-Ab.

Of interest, although no animal studies have shown that this particular antibody can cause muscle weakness, a myasthenic syndrome can be passively transferred with plasma from these patients into an animal model. In addition, seronegative patients respond to plasmapheresis and immunosuppressive therapy, similar to seropositive MG.

The experimental animal model of MG, experimental autoimmune MG (EAMG) requires CD4+ helper T cells needed for the antibody-mediated autoimmune response. In mice, the T-cell response to the AchR is predominantly to a single peptide in about 50 percent of the cells. These T cells use a restricted set of TCR genes and have a conserved CDR3 region.

This is in contrast to the human manifes-tation of the disease, where AChR-specific T cells are very low in frequency. The spe-cific T cells, when they have been cloned from patients are heterogeneous in MHC restriction, and recognize various epitopes of the AChR.

There are three levels to treatment of myasthenic patients, cholinesterase inhibitors, thymectomy, and immuno-suppression. The mainstay of medica-tions that treat the symptoms, but not the course of the disease, are the cholin-esterase inhibitors. These medications increase the availability of acetylcholine in the neuromuscular junction and thereby help to overcome the effect of decreased acetylcholine receptors due to the autoan-tibodies, AChR-Ab.

However, while this medication may maintain patients on a stable course for some time, they will not induce remis-sion of the disease. The two approaches to this goal are thymectomy and immuno-suppressants. The reason for thymectomy is that most MG patients have thymic abnormalities, either hyperplasia (60–70 percent) or a thymoma (10–12 percent). Computerized tomography or MRI scan-ning of the mediastinum should be routine in all patients suspected of MG. Although the clinical response is very variable

according to the literature, thymectomy is the most frequently used treatment for myasthenia and is generally suggested to be performed very early. The rationale is that the thymus gland serves as a source for the antigens involved in the autoim-mune response detected in patients, even without the presence of thymoma.

The third arm of treatment is immuno-suppression. Steroids improve 45 percent of patients and cause remission in 30 per-cent. Steroids can initially cause a wors-ening of the clinical symptoms in the first few weeks, which is unique to this dis-ease, and patients are often initiated on them in a hospital setting. Plasmaphore-sis may be performed preventively before steroids are initiated. Patients are often on steroids for one or two years before tapering is begun. Immunosuppressive agents, such as azathioprine or cyclospo-rine, are also administered in some cases because they act as T-cell suppressors. The antibody production in this disease is T-cell dependent, as demonstrated in the animal model.

Plasmapheresis or intravenous immu-noglobulin is sometimes used in the set-ting of a clinical crisis. The plasmapho-resis removes the AChR-antibody from the circulation and the clinical response correlates with the decrease in antibody titer. Sometimes the plasma is processed through a staph-protein A immunoabsor-bant column to more effectively remove the IgG. Clinical trials are also under way using an AChR-Ab specific immunoab-sorbant column. Intravenous immuno-globulin also has been demonstrated to reverse an acute exacerbation for reasons unknown. For both treatments, while the response time is rapid, a matter of days, the result is short lived, lasting only a few months. It is hoped that within that time other modalities of treatment have begun to be effective.