APSGN is an immune complex disease that follows pharyngitis and skin infec-tions from nephritogenic strains of group A streptococci.

APSGN is an immune complex disease that follows pharyngitis and skin infec-tions from nephritogenic strains of group A streptococci. Most affected patients are children in developing countries. About ten days after streptococcal pharyngitis or twenty-one days after streptococcal skin infection (impetigo), susceptible indi-viduals may develop microscopic hema-turia or full-blown acute nephritis (red cell casts, proteinuria, edema, hyperten-sion, and acute renal failure). Diagnosis is made by history of throat or skin infec-tion. In addition to throat or wound cul-ture, serology for ASO, anti-DNAase B and antihyaluronidase may be obtained to confirm the infection. Circulating immune complexes appear early in the course of the disease and are associated with hypo-complementemia. The majority of affected children recover and kidney biopsy is not always indicated. When kidney biopsy is obtained, prominent findings are compat-ible with a diffuse proliferative nephritis picture (hypercellularity and marked neu-trophilic infiltration). On immunofluo-rescence, there is granular deposition of complements and IgG in the glomerular tuft. On electron microscopy, subepithe-lial dense deposits, or “humps,” are con-sidered hallmarks of PSGN. Damage to the epithelial cells appears to be respon-sible for the proteinuria noted in this renal disease. Subendothelial deposits are also seen, which are primarily responsible for complement activation and influx of inflammatory cells.

Over the past two decades, many attempts to identify the nature of the strep-tococcal antigen in the immune complex have been made by several investigators.

Two prominent proteins have been impli-cated in the pathogenesis of APSGN: strep-tokinase (Ska) and SPEB. Ska is produced by all strains of group A streptococci, but SPEB appears to be secreted in abundance in nephritogenic strains causing APSGN. Ska cleaves cell-surface-bound plas-minogen to active plasmin. Plasmin then cleaves fibrin into degradation products, which are also seen in inflammatory pro-cesses. Bound plasmin apparently cannot be inhibited by endogenous antiproteases, thereby causing unopposed formation of fibrin degradation products. The role of streptokinase, however, was in doubt when immunostaining studies on kidney biopsy specimens using rabbit anti-Ska antibody failed to detect this protein.

SPEB, or streptococcal proteinase, how-ever, behaves as a cysteine protease, which can activate endothelial metalloprotease and cause tissue destruction. Although structurally unrelated to streptokinase, SPEB can also bind plasmin to form a com-plex that can activate the complement cas-cade system. SPEB and other streptococcal pyrogenic exotoxins (SPEA and SPEC) are considered superantigens, which can stimulate T-cell proliferation. The result is excessive production of cytokines, which mediate inflammation and tissue injury. As demonstrated by Cu and coworkers, immu-nohistochemical and serologic studies (see Figures 17.4 and 17.5) on kidney biopsy specimens and sera from affected patients have shown strong and specific reactivity to SPEB in the biopsies and in the sera of these patients. This suggests a significant role of this protein in the pathogenesis of APSGN. This observation was recently confirmed in a much larger study by Bats-ford and coworkers with essentially the same results. 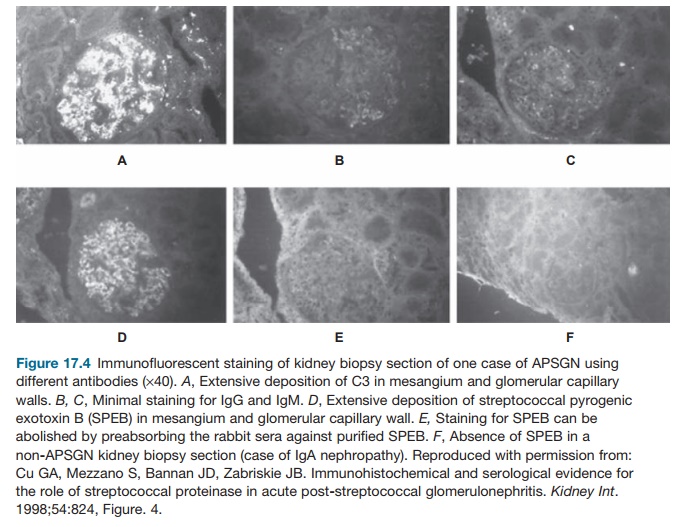 APSGN follows a relatively benign course. The majority of cases will recover spontaneously with only less than 1 percent of children and slightly higher percentages of adults needing long-term dialysis treatment. Hematuria may resolve in three to six months. Proteinuria may persist for years, which may be later asso-ciated with hypertension and renal insufficiency. 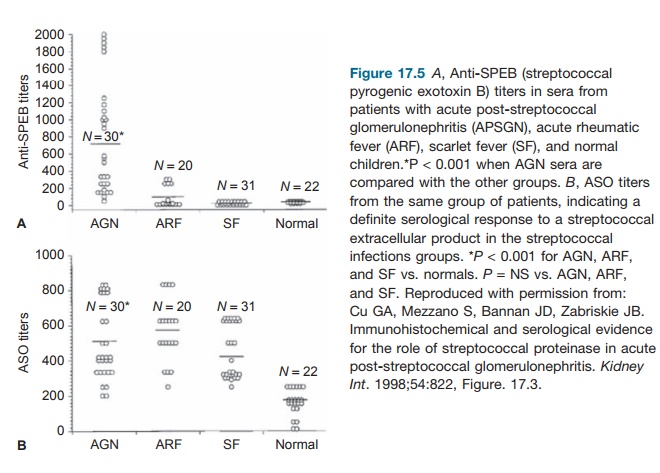