When corticosteroids are given, the result is a transient lympho-penia peaking at four hours and lasting up to twenty-four hours.

Several groups of drugs suppress the immune system (see Table 3.1). Among the oldest of these drugs are the corticoste-roids, which have long been known to alter immune responses. When corticosteroids are given, the result is a transient lympho-penia peaking at four hours and lasting up to twenty-four hours. Helper T cells are predominantly affected, and at higher doses of steroids inhibition of interleukin-2 (IL-2) production by helper T cells becomes increasing important. Another major effect in humans is on resting macrophages (activated macrophages are not sensitive). 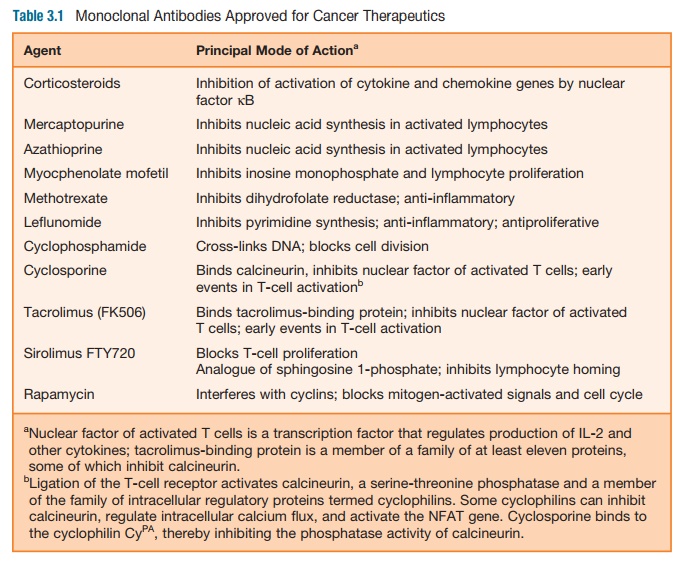 In humans, steroids are used for two main purposes. One is the prevention or reversal of graft rejection (see Chap-ter 18). The other is in the treatment of autoimmune and malignant diseases. Corticosteroids modulate inflammation by suppressing cytokine- and chemokine-encoding genes, which inhibits the acti-vation and recruitment of inflammatory cells.

The side effects of steroids are numer-ous and often depend on both the dose used and duration of treatment. These include an increased susceptibility to infection, osteoporosis, and growth disturbances in children, as well as gastric ulcers, hyperten-sion, acne, and hirsutism. By giving larger doses for shorter periods, many of these side effects are lessened.

The development of the thiopurines in the 1950s ushered in a new group of immunosuppressive agents, the most important of them being azathioprine. It is inactive until it is metabolized in the liver and takes three to four weeks to be effec-tive. The metabolites work by inhibiting DNA synthesis in dividing cells (such as activated lymphocytes). Like many other drugs, it has side effects, mainly in bone marrow toxicity, and long-term use even-tually results in granulocytopenia and thrombocytopenia.

Another group is the alkylating agents, of which cyclophosphamide is one of the best examples. This drug also requires activa-tion by the liver. It inhibits cell division and can suppress antibody production, and it decreases delayed-type hypersensitivity. Methotrexate, which inhibits cell division by disrupting folic acid metabolism, has similar immunomodulatory effects.

Cyclosporin, a naturally occurring fungal metabolite, also inhibits T-cell acti-vation and cell-mediated immunity. The drug becomes active only when complexed to its intracellular receptor cyclophilin, and it inhibits early calcium-dependent events, especially the activation of several cytokine genes. Its major effect is the inhibition of IL-2 production and the CD4+ proliferation responses. Cyclosporin has been extremely useful in the control of transplant rejec-tion and is also used in several autoim-mune diseases such as psoriasis and severe rheumatoid arthritis. However, long-term use has demonstrated severe toxicity such as nephrotoxicity and hepatotoxicity and particularly lymphoma induction. Taco-limus is a newer-generation drug with a similar mechanism of action.