Although many of the immunoregulation techniques revolve around the humoral arm of the immune response, there is increasing interest in targeting T cells or the cytokine regulators to regulate the elimination of autoreactive T cells, tumor cells, and the maintenance of a specific memory response to these pathogens.

Although many of the immunoregulation techniques revolve around the humoral arm of the immune response, there is increasing interest in targeting T cells or the cytokine regulators to regulate the elimination of autoreactive T cells, tumor cells, and the maintenance of a specific memory response to these pathogens. Such immune responses are normally regulated by cytokines, and the activities of the cyto-kines have a high degree of redundancy. The common cytokine receptor γ chain is used by IL-2, IL-4, IL-7, IL-9, IL-15, and IL-21 (see Figure 3.2). The IL-2R and the IL-15R have a second (β chain) subunit in common as well, but have unique α sub-units (see Figure 3.3). These two cytokine receptors use a common signaling path-way that involves JAK1, JAK3, and STAT5. The signaling involves the phosphoryla-tion of STAT5 that results in the dissocia-tion of STAT5 from the receptor and the subsequent dimerization of STAT5. The dimers then translocate to the nucleus and promote transcription of target genes (see Figure 3.2).

Figure 3.2 The structure and signaling pathways of the common cytokine-receptor γ chain family of receptors. Reprinted by permission from Macmillan Publishers: Waldmann T. The biology of interleukin-2 and interleukin-15: implications for cancer therapy and vaccine design. Nat Rev Immunol. 2006;6:595

There are several distinct differences in the functions of IL-2 and IL-15. IL-2 is involved in checkpoints or brakes on the immune system. IL-2 is required to maintain the competitiveness of forkhead box P3- (FoxP3-) expressing regulatory T cells, and plays a crucial role in activa-tion-induced cell death (AICD), a process that leads to the elimination of self-reactive T cells. Thus, the unique feature of IL-2 is to prevent T-cell immune response to self that would lead to autoimmunity. In contrast, IL-15 expression has no effect on regulatory T cells but is an anti-apoptotic factor in several systems. Furthermore, IL-15 promotes the maintenance of CD8+ CD44 memory T cells. Thus, IL-15 has as its primary role the maintenance of a robust memory response to invading pathogens.

These observations from ex vivo func-tional studies are supported by studies in mice deficient in cytokine or cytokine recep-tor genes. For example, IL-2-deficient and IL-2Rα-deficient mice develop a marked 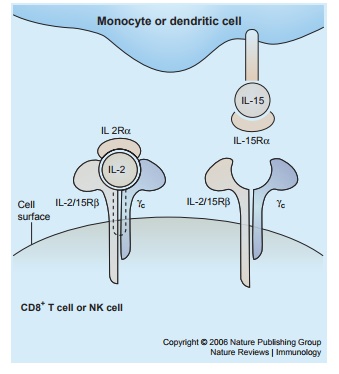 Figure 3.3 The mode of interaction of IL-2 and IL-15 with the subunits of their receptors. Reprinted by permission from Macmillan Publishers: Waldmann T. The biology of interleukin-2 and interleukin-15: implications for cancer therapy and vaccine design. Nat Rev Immunol. 2006;6:595.

enlargement of the peripheral lymphoid organs and polyclonal expansion of T and B cells, and this proliferation reflects the impairment of regulatory T cells and AICD. These mice develop autoimmune diseases such as hemolytic anemia and inflamma-tory bowel disease.

In contrast, mice that are deficient in IL-15, or its receptor IL-15Rα, do not develop enlarged lymphoid tissues, increased serum immunoglobulin, or autoimmune disease. Rather they have a marked reduc-tion in the number of thymic and periph-eral natural killer (NK) cells, NK T cells, and intestinal intraepithelial lympho-cytes. Thus, IL-15Rα-deficient mice show a marked reduction in CD8+CD44hi mem-ory T cells. The differences in the func-tions of IL-2 and IL-15 reflect the distinct modes of actions of these two cytokines.

IL-2 functions as a secreted cytokine, act-ing on preformed heterotrimeric receptors expressed on activated T and NK cells (Figure 3.3). In contrast, IL-15 acts as part of an immunological synapse. IL-15 and IL-15Rα expressed on the surface of anti-gen-presenting cells are presented in trans to CD8 T cells and NK cells that express only the β and γ chain of the IL-15 receptor (Figures 3.3 and 3.4). 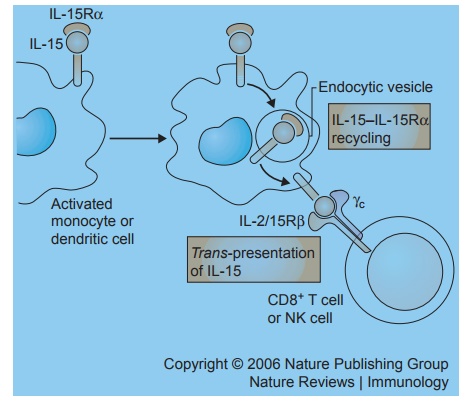 Figure 3.4 Following their co-induction on antigen-presenting cells by addition of an interferon, the interleukin receptor α chain presents IL-15 to neighboring natural killer cells and memory phenotype CD8 T cells that express the other IL-15 receptors beta and gamma. Reprinted by permission from Macmillan Publishers: Waldmann T. The biology of interleukin-2 and interleukin-15: implications for cancer therapy and vaccine design. Nat Rev Immunol. 2006;6:595.

The unique IL-2 and IL-2Rα system has been a valuable target for immunotherapy because IL-2Rα is not expressed by any resting cells with the exception of T regu-latory cells. Yet, it is expressed by many malignant cells of various T- and B-cell leukemias, T cells that participate in organ-allograft rejection, and finally by T cells involved in autoimmune diseases. Thus, antibodies directed against IL-2Rα (sev-eral such antibodies have been approved by FDA for use in humans) specifically destroy those cells that are IL-2 dependent. One of these antibodies (daclizumab by Hoffmann – La Roche) is in phase II trials in patients with uveitis, in certain multiple sclerosis patients, and in asthma patients. Finally, it was shown to be effective in a subset of patients with adult T-cell leukemia due to human T-cell lymphotropic virus I.

It is believed that IL-15 might contrib-ute to autoimmune diseases by inducing the expression of TNF-α, by inhibiting self-tolerance mediated by IL-2-induced AICD, and by facilitating the maintenance of CD8+ memory T-cell survival, includ-ing that of self-reactive memory cells. For example, dysregulated IL-15 expression has been reported in patients with a range of autoimmune diseases such as multiple sclerosis, inflammatory bowel disease, and psoriasis. In this context, cytokine-directed blockade of TNF with specific monoclonal antibodies or soluble TNF receptors has been an important target for many of the diseases mentioned previously. Yet TNF-directed therapies do not provide effective therapy for all these patients, and new therapeutic targets are needed. Furthermore, although TNF-directed therapy has an anti-inflammatory effect, it does not have an effect on self-reactive memory T cells that might play a role in the pathogenesis and maintenance of auto-immune diseases. Thus, it is hoped that by targeting IL-15 it might be possible to both achieve the anti-inflammatory effects and reduce the number of CD8+ self-reactive memory T cells.

Several agents that inhibit IL-15 activ-ity have been developed, including sol-uble IL-15Rα, mutant IL-15 molecules, and antibodies specific for IL-2/IL-15Rβ.

For example, in vivo, the IL-15 mutant markedly diminished antigen-specific delayed-type hypersensitivity responses in Balb/c mice and increased survival of pancreatic islet cell allografts. The use of soluble high-affinity IL-15Rα inhibited the development of mouse collagen-induced arthritis and inhibited allograft rejection. An antibody specific for IL-15 has been efficacious in mouse models of psoriasis. This antibody is now in a phase I/II clinical trial in patients with rheumatoid arthritis. Finally, a humanized antibody specific for IL-2/IL-15Rβ when administered as a single agent prolonged cardiac-allograft survival in cynomolgus monkeys, and only minimal toxicity was noted when this antibody was given in a phase I trial to patients with T-cell large granular lymphocytic leukemia.