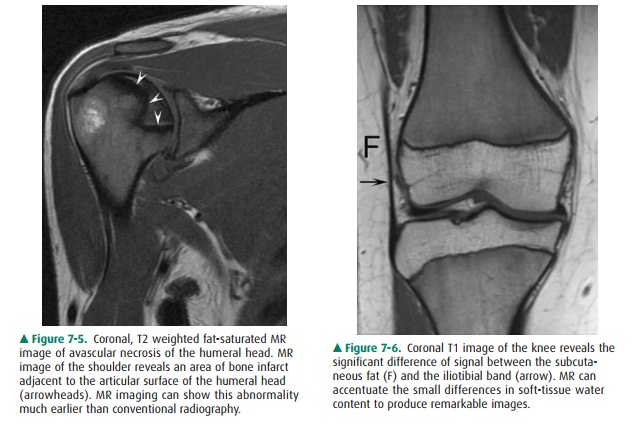 Radiography should always be the initial imaging test to eval-uate the joints and should be obtained after the patient has had a thorough history and physical examination and there is a clear indication to obtain the study.

Radiography should always be the initial imaging test to eval-uate the joints and should be obtained after the patient has had a thorough history and physical examination and there is a clear indication to obtain the study. Various projections may be used depending on the clinical indication or the sit-uation, but at least two orthogonal projections should be obtained. Often radiographs alone will confirm or refute the clinical diagnosis. In many instances, however, it may be necessary to use more sophisticated imaging techniques to clarify the radiographic findings or to further evaluate de-pending on the clinical scenario. The following paragraphs discuss the selection of the imaging techniques in a few com-mon clinical scenarios.

Conventional radiographs should be the initial modality of choice when confronted with a possible congenital anomaly or pediatric joint abnormality, or in a child presenting with a limp.

Given that the joint structures are not well mineralized in children, further evaluation of the joint with ultrasonography or MR imaging is often required to make a definitive diagno-sis, as these modalities have superior soft-tissue resolution. If MR imaging facilities are not available, congenital abnormali-ties can be investigated with a combination of conventional radiography, ultrasonography, and CT.

In acute trauma, the conventional radiograph remains the mainstay of the initial imaging assessment. If fractures are identified, additional imaging will depend on the needs of the clinician or sub-specialist physician as dictated by the clinical situation. Generally, fractures that extend into the joint surface (intraarticular fractures) are treated with greater concern because of the importance of reestablishing the in-tegrity of the joint. Intraarticular fractures are frequently treated by operative reduction and internal fixation, espe-cially if the fracture fragments are severely displaced. CT examination of the injured limb and joints is used preoper-atively for surgical planning and postoperatively to assess the results of surgical intervention. The advantages of CT are that it enables precise assessment of joint reconstitution and also identifies any intraarticular bone fragments or en-trapped tendons that could interfere with proper reduction and healing (see Figure 7-4). 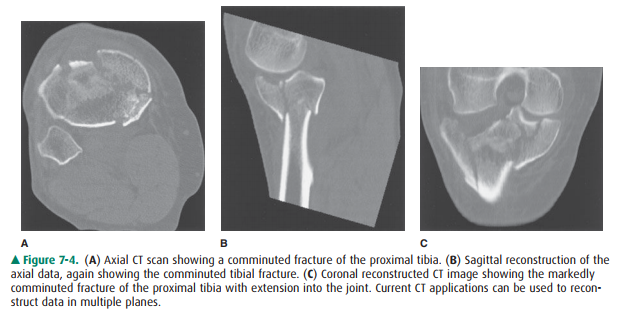 Conventional radiographs are used initially to determine the integrity of the joint. If the joint is normal and there is a per-sistent clinical suspicion of injury, MR imaging should be employed because of its superior soft-tissue contrast and res-olution. It is, therefore, particularly suited for investigation of the intraarticular and periarticular soft-tissue structures and cartilage (see Figures 7-5, 7-6). 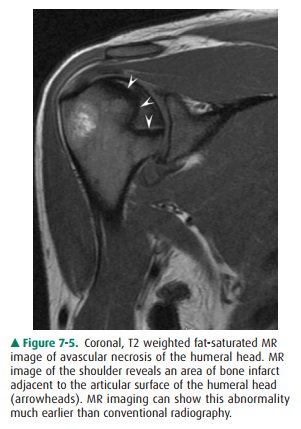 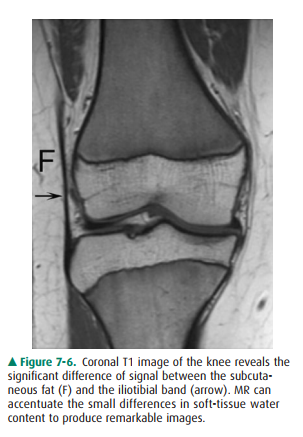 Likewise, if the initial conventional radiographs are normal, MR imaging is the next modality of choice in the patient with a painful joint. MR imaging may detect evidence of a small joint effusion, inflamed synovium, and subtle erosions that could suggest the diagnosis of an inflammatory arthropathy or a septic joint. Percutaneous joint aspiration of synovial fluid, often fluoroscopically guided, may result in confirma-tion of infection or yield abnormal crystal deposits within the joint, such as with gout.

7-1. Both hips in the patient in this case (Figure 7-10) are abnormal. The femoral heads and necks are mal-formed and dislocated from the acetabula fossae su-periorly. The acetabulae are also malformed and oriented more vertically than normal. The patient had bilateral congenital dislocation of the hips that had been ignored by her parents (A is the correct an-swer to Question 7-1). This diagnosis should have been made at birth or shortly thereafter so that cor-rective therapy could have been instituted. 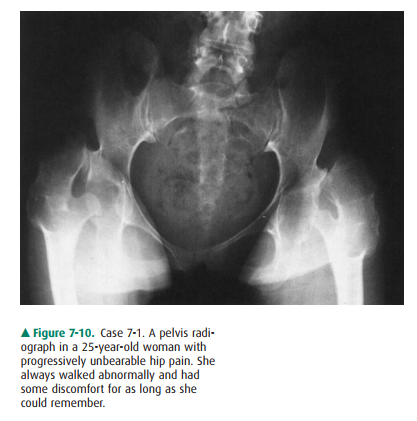 7-2. In this case (Figure 7-11), the capital femoral epi-physis on the right (arrow) is laterally displaced and smaller than the left epiphysis (arrowhead). The acetabular fossa on the right side is also mal-formed and more vertical than the one on the left. The normal development of the acetabulum is de-pendent on a normally located femoral head, and this is the explanation for this abnormality. These findings are the classical radiographic features of developmental dysplasia of the hip (DDH). When this finding is encountered, MR imaging is the next most appropriate imaging test (B is the correct an-swer to Question 7-2). 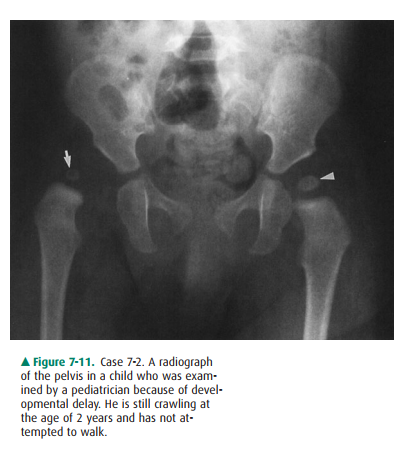 7-3. In this case (Figure 7-12), the calcaneus is de-formed (white arrow). The talus is poorly visual-ized because of its complete dislocation from its normal position below the tibia, and there are sub-luxations at the tibiotalar, talocalcaneal, and talonav-icular joints. There is overall frank disorganization of this ankle joint, and clinically there was diffuse soft-tissue swelling around the ankle (not appreci-ated on this lateral film). There is also a metaphy-seal fracture of the proximal tibia with exuberant periosteal/callus formation (black arrow). All of these findings in this patient are caused by chronic repetitive trauma in a patient with congenital insensitivity to pain (D is the correct answer to Question 7-3).

A.   Congenital dislocation of the hips

Congenital hip dislocation is actually a bone dysplasia manifesting as a joint disorder. The femoral head is dysplastic and does not provide adequate stimulation for proper development of the acetabulum. Usually, the femoral head is displaced laterally out of an unusually shal-low (ie, more vertically oriented) acetabulum (Figure 7-11). Once the diagnosis of DDH is confirmed, treatment should begin at birth or in the perinatal period to minimize complications.

Historically, hip arthrograms were used to define the lo-cation of the femoral head in the neonate because the struc-ture is cartilaginous at birth and therefore radiolucent. Ultrasonography is an excellent test to assist in the diagno-sis of DDH in utero and in the neonatal period because it re-quires no ionizing radiation. However, the interpretation of ultrasound is observer dependent, and the diagnosis and char-acterization of DDH can be difficult at times. MR imaging can show the soft-tissue and osseous structures, as well as the articular cartilage, and is currently the modality of choice in the evaluation of DDH. If patients are not treated or are incompletely treated, they will eventually develop secondary, premature osteoarthritis. MR imaging offers limited diagnostic value over conventional radiographs in late-stage disease.

Proximal focal femoral deficiency (PFFD) is a disease of uncertain etiology that is characterized by congenital absence of a segment or all of the proximal third of the femur. The in-cidence is higher in children of diabetic mothers, and there is also an association with congenital hip dysplasia. MR imag-ing is also the imaging modality of choice in evaluating chil-dren with these disorders.

Arthrogryposis multiplex congenita is a noninheritable congenital disease of uncertain etiology characterized by multiple joint contractures. It is believed to be due to neuro-muscular events occurring in utero. The joints of the lower limb are almost invariably affected. There may be other asso-ciated extraskeletal congenital anomalies.

A neuropathic joint is caused by chronic repetitive trauma in the setting of impaired or absent sensation. The characteristic features of neuropathic joint include soft-tissue swelling, fragmentation of the bony structures, and general disorganization of the joint. Joint effusion is often present. The more common causes of neuropathic joints in the lower extremities include diabetes mellitus and tabes dorsalis (neurosyphilis). Asymbolia or congenital insensitiv-ity to pain, as exhibited in Case 7-3 (Figure 7-12), is a group of uncommon congenital disorders in which there is a vari-able degree of loss of pain sensation and is an unusual cause of neuropathic joints. Patients with asymbolia almost always acquire deformities of the extremities after repeated trauma. This diagnosis should be considered in the young patient with multiple healing fractures with soft-tissue swelling and joint disorganization in whom nonaccidental trauma has been excluded.