Suppose we have a digital image which can be represented by a two dimensional random field A’y ^ . t r

Suppose we have a digital image which can be represented by a two dimensional random field A’y ^ . t r

An image processing operator in the spatial domain may be expressed as a mathematical function L applied to the image f to produce a new image -v^ “ ^ ^ 'X' -v^ - as follows.

The operator T applied on f ( x , y) may be defined over:

A single pixel (x,y) . In this case T is a grey level transformation (or mapping) function.

T may operate to a set of input images instead of a single image. 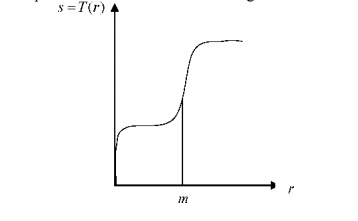 The result of the transformation shown in the figure below is to produce a binary image. s = T(r)

Let g( x, y) be a desired image formed by the convolution of an image f (x, y) and a linear, position invariant operator h(x,y), that is:

exhibits some highlighted features of f (x,y) . For instance, edges in f (x,y) can be accentuated by using a function H(u,v) that emphasises the high frequency components of F(u,v)