The answer to this question has occupied many researchers and psychiatrists throughout the last 50 years.

On the other hand, certain supportive and more directive techniques, such as greater activity of the therapist through fo-cusing the patient on specific current problems and relationships, reassuring and affirming the patient, and the giving of advice, are used much more in psychoanalytic psychotherapy than in 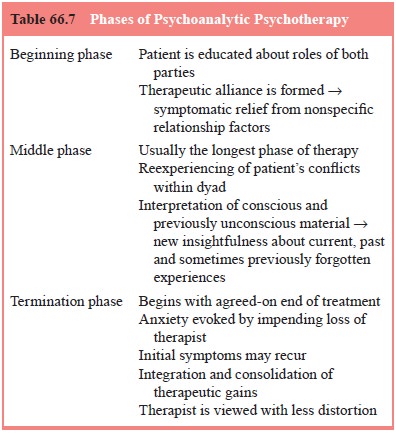 psychoanalysis. Therefore, the adherence to the therapist’s neu-trality is less strict, and as a result, there is often but not always less frustration for the patient in psychoanalytic psychotherapy. The length of treatment may not distinguish the two approaches, but the frequency of sessions (four or five per week) and the use of the couch, however, are characteristic of psychoanalysis (see Table 66.7).

Overall, it is fair to say that psychoanalytic psychotherapy

·              ous other techniques from other dynamic and behavioral psychotherapies;

·              Emphasizes the usefulness of focusing on current (dynamic) problems and less on genetic issues; and

The last point is particularly important in that it facilitated the development of brief dynamic psychotherapies which address focal problems generally in up to 20 sessions.