Gender and Ethnocultural Issues in Psychotherapy

Does the gender of the psychotherapist have any effect on the psy-chotherapeutic relationship and treatment outcome?

Does the gender of the psychotherapist have any effect on the psy-chotherapeutic relationship and treatment outcome? Are certain psychological problems best treated by therapists whose gender is different from that of the patient? Do different phenomena ap-pear in the treatment of those patients whose therapists are of the same gender? Is the duration of treatment affected by the thera-pist’s gender? Does gender have any influence on the choice of therapist by a patient? These are important questions that have been debated in psychotherapy and psychoanalytic literature for more than 50 years

Although the literature regarding the advantages and dis-advantages of gender matching of patients and therapists consists largely of anecdotal and negative reports (Zlotnick et al., 1998), it is nevertheless evocative. A number of common themes have emerged, including that

·              The therapist’s gender may be less important in psychoa-nalysis than in face-to-face psychoanalytic psychotherapies because, in the latter, the transference can be less intense (Mogul, 1982).

Although there is only one controlled study and it showed no difference regarding the influence of the therapist’s gender on the therapeutic process (Zlotnick et al., 1996), there is much to con-sider about the influence of actual gender and gender-related beliefs of both patient and therapist on the emergence of transference and countertransference. However, the best psychoanalytic psychother-apies will include ample opportunities for the working through of the patient’s issues related to important figures of both genders

Culture refers to meanings, values and behavioral norms that are learned and transmitted in the dominant society and within its social groups. Culture powerfully influences cognitions, feel-ing and “self” concept, as well as the diagnostic process and treatment decisions. Ethnicity, a related concept, refers to social groupings which distinguish themselves from other groups based on ideas of shared descent and aspirations, as well as to behav-ioral norms and forms of personal identity associated with such groups (Mezzich et al., 1993).

Given the increasing multiculturalism of many cities in the USA, how should the psychoanalytic psychotherapist treat pa-tients from cultures other than his or her own? Whereas therapists are obligated to be culturally informed, Foulks and colleagues (1995) have argued against the promotion of culturally specific psychotherapies. Although acknowledging that some cross-cul-tural psychiatrists believe expressive–supportive psychotherapy to be an ethnotherapy appropriate only to the citizens of the West-ern world, they emphasized the overwhelming problems in estab-lishing separate therapies and clinics devoted to patients from a multitude of specific cultures.

The short answer to this question is yes. Meta-analytical studies of psychotherapy have demonstrated unequivocally that psycho-therapy is effective (Luborsky et al., 1975; Smith et al., 1980; Lambert et al., 1986). The study by Smith and coworkers (1980), for example, demonstrated that 80% of those patients treated in psychotherapy fared better on outcome measures than those who received no treatment. Psychological growth achieved through psychotherapy is also enduring (Husby, 1985).

Cost-offset studies have repeatedly demonstrated the help-fulness of psychotherapy in reducing general health care services by as much as one-third (Mumford et al., 1984; Krupnick and Pincus, 1992; Olfson and Pincus, 1994). These include reduction in hospital stays for surgical and cardiac patients (Mumford et al., 1982) and decreased treatment costs for those with respiratory ill-nesses, diabetes and hypertension (Schlesinger et al., 1983). Brief psychotherapy has also been shown to be effective in general medical clinics, where those patients with significant medical and psychiatric problems improve substantially more than those treated by primary care physicians alone (Meyer et al., 1981).

Luborsky and coworkers (1993) have demonstrated that psychoanalytic psychotherapy is as effective as cognitive, behav-ioral, experiential, and group therapies and hypnotherapy. For this meta-analysis, rigorous inclusion criteria were established including, but not limited to, adequate sample size with random assignment, suitable length and frequency of sessions, sound out-come measures, adherence by therapists to treatment manuals, and comparable skill levels among therapists. A number of other studies have demonstrated positive benefits in panic disorder de-pression, personality disorder, drug abuse, eating disorders and others (Willborg and Dahl, 1996; Bateman and Fonagy, 2001.) 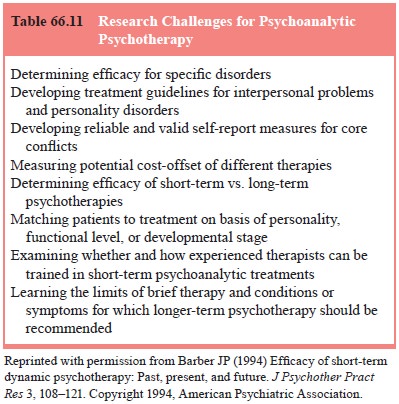 Towards a Neurobiology of Psychotherapy

the central location for the formation of new explicit memories. Not only does memory consolidation lead to persistent modfica-tions in synaptic plasticity, but psychotherapy, a form of learn-ing, also produces changes in the permanent storage of informa-tion acquired throughout an individual’s life and provides new resources to address important psychobiological relationships between affect, attachment and memory which is of funda-mental importance in psychiatric disorders. Rapidly accruing knowledge about the different types of memory and the role of the amygdala now support the influence of memories that reside outside of the awareness of our patients (LeDoux, 1996). Implicit memories formed in infancy and childhood persistently affect the manner in which patients experience themselves and their worlds as manifested, for example, in transference reactions within and outside of the therapeutic relationship.

The study of psychotherapy from a neurobiological per-spective is likely to provide greater understanding of how words in the context of therapeutic relationships can heal. It may be that there are similar mechanisms and anatomical regions that are involved in the successful treatment of psychiatric illness with psychotherapy and pharmacotherapy as monotherapies, as well as in the combined treatment situation (Sacheim, 2001). It is also likely to yield a greater understanding of pathogenesis and de-lineate helpful interventions to decrease genetic vulnerability to emotional disorders.