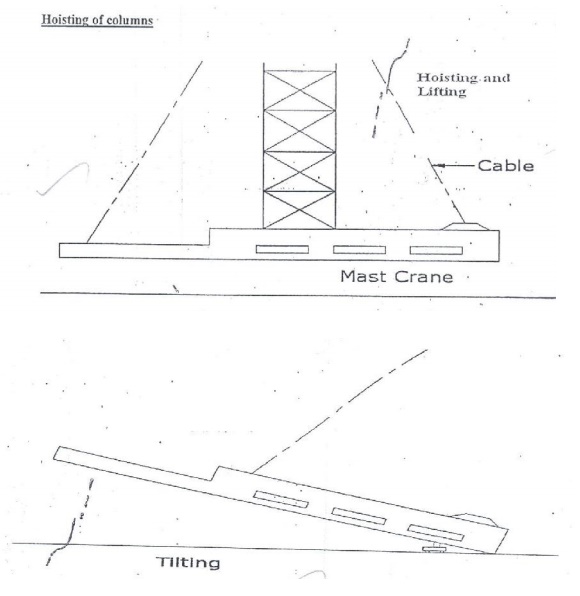 The hoisting machine for small column is less than five tones. First of all pick up gear must be assembled on to the column and the column is then under pinned.

The hoisting machine for small column is less than five tones. First of all pick up gear must be assembled on to the column and the column is then under pinned. 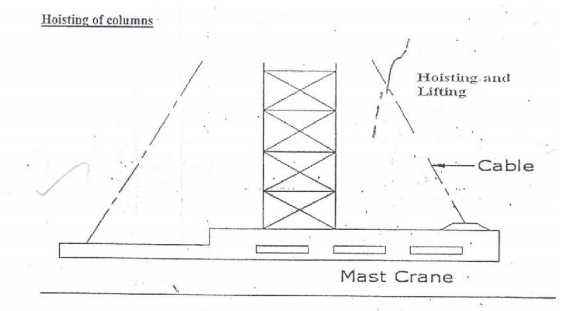 Thereafter the column is lowered temporarily on to a sheep shoe assembled at the foot and the roller track is pushed under the shoe. When column is hoisted the pick up points moves vertically and bottom resting on the roller tracks shifts towards the footing. When the column is lifted to the required height, the retaining cable is used to decrease and finally stop the swinging motion of the column.

The hoisting and fixing up of the beams:

Beams in general are liftedat two points depending on the weight and dimmensioons as well as the load bearing capacity of hoisting machines. The hoisting grider which is heavy to a great can be executed with hydraulic jacks. The jacks are lowered and the beam is placed to the required position to the column.

For lifting up of trusse and large beams of length 25-30m. care is taken to lift the rocker in uniform rate with two hoisting machines otherwise the beams would be subjected to distortion during the lifting leading to cracks.

2.     The difficulties in construction in general are felt in this mechanization can case.

3.     Mechanization can not be of such high degree as site PF is done for smaller duration of time.

1.     The members produced are to be transported t the place of costruction this accounts for about 10-15% of the cost of production and assembling.

3.     Prefabrication is appropriate for mass production for manufacture of standaridized members.

5.     This method is most suited in the case of small prefabricates which are to be prefabricated in very large number.

There are 3 commonly known dimension for the prefabricates.

1.     The design of the errectio dimension governing the dimensional coordination of the prefabricates.

3.     The actual dimension of the element when delivered the design dimension should be a multiple of abasic module size m or of a module lmp.

In this method, the prefabrication mature where they are moulded while the production teams moves to successive stands. The bed on whih prefabricates are cast may be fixed or movable. Tilting forms are often uused and in tthis method steam curing is generally done.

The whole production is split up in to series operations carried out at separate successive and permanent points served by specialized teams. The movement of the mould or prefabricate one point to other vary by means of conveyor belt trolleys.

The rigid steel forms are assembled at station 1 where they are mould oil to reduce the adhesion of concrete.The conveyor moves fron 1 to 2 where prestressing wires are fixed & in the next station anchoring of the wires is carried out. The prepared mould is then carried to the station 1ie casting station.After casting ,it is shifted to the vibrating table & finally stacked @ station 5 for setting.

After that,it is passed through tunnel autoclave for curing.After steam curing move too station 7 for demoulding & is finally stacked @ 8.

In the aggregate method,aggregate describes large complex permanently installed machines & mechanical appliances which carry out most of the separate operations involved in the casting of the concrete composition.The stand is operated by a permanent team & the only move the prefabricate makes is to the maturing point.

Aggregate method is used in the production of multi duct hollow floor pannel in Poland.At production point the reinforcement is fixed in the form & remote controlled aggregate(machine)inserts the duct formers,cast& vibrates the concrete,floats @ the top of the floor.The prepared prefabricate then move to the autoclave chamber in which hardening of concreteis accelerate.In many factories combined technology are employed when complex prefabricate are required.

1.The stand technique is the most flexible one.It is used in varying degrees of mechanization,in all kinds of prefabricate factories.

2.It is simple & less capital is required.It can be used for field prefabricate also.

3.Aggregate method is used for large scale productionin which case number of machineries is required.