History of a Cell

As studied earlier, the nucleus is the organising centre of the cell.

One of the most important features of the living cells is their power to grow and divide. New cells are formed by the division of pre -existing cells. Cells increase in number by cell division. The parent cell divides and passes on genetic material to the daughter cells.

Neurons can be replaced! Stem cells in the human brain : - most neurons are in G0 and do not divide. As neurons and neuroglia die or injured they are replaced by neural stem cells

Edouard Van Beneden, a Belgian cytologist, embryologist and marine biologist. He was Professor of Zoology at the University of Liège. He contributed to cytogenetics by his works on the roundworm Ascaris. In his work he discovered how chromosomes organized meiosis (the production of gametes).

History of a Cell 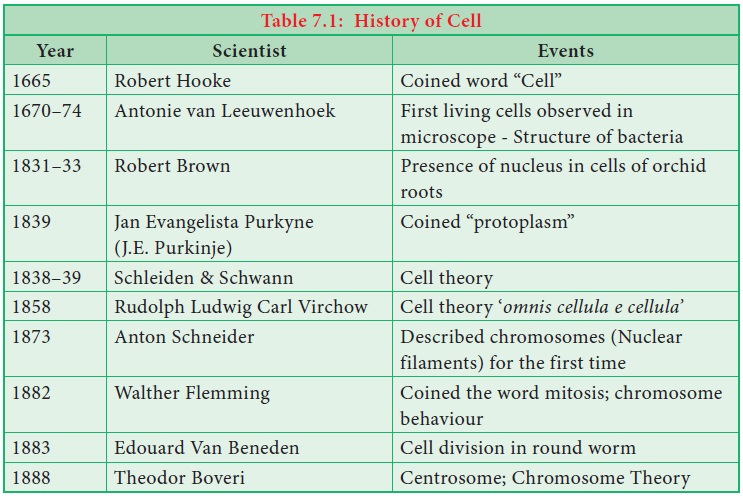 1. The Role of the Nucleus

As studied earlier, the nucleus is the organising centre of the cell. The information in the nucleus is contained within structures called chromosomes. These uniquely:

·           Genetic information copied from cell to cell while the cell divides.

·           Hereditary characters are passed on to new individuals when gametic cells fuse together in sexual reproduction.

The four important features of the chromosome are:

·           The shape of the chromosome is specific: The long, thin, lengthy structured chromosome contains a short, constricted region called centromere. A centromere may occur anywhere along the chromosome, but it is always in the same position on any given chromosome.

·           Chromosomes are copied: Between nuclear divisions, whilst the chromosomes are uncoiled and cannot be seen, each chromosome is copied. The two identical structures formed are called chromatids.

There are two types of nuclear division, as mitosis and meiosis. In mitosis, the daughter cells formed will have the same number of chromosomes as the parent cell, typically diploid (2n) state. Mitosis is the nuclear division that occurs when cells grow or when cells need to be replaced and when organism reproduces asexually.

In meiosis, the daughter cells contain half the number of chromosomes of the parent cell and is known as haploid state (n).

Whichever division takes place, it is normally followed by division of the cytoplasm to form separate cells, called as cytokinesis.