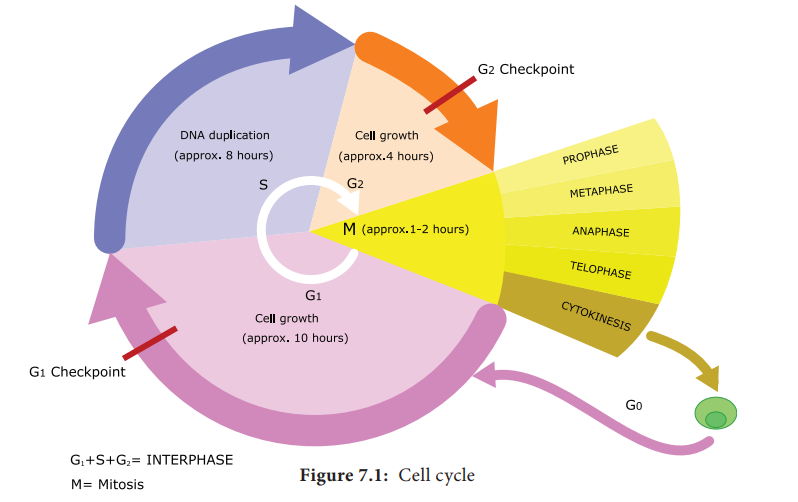 Definition: A series of events leading to the formation of new cell is known as cell cycle.

Different kinds of cells have varied duration for cell cycle phases. Eukaryotic cell divides every 24 hours. The cell cycle is divided into mitosis and interphase. In cell cycle 95% is spent for interphase whereas the mitosis and cytokinesis last only for an hour. 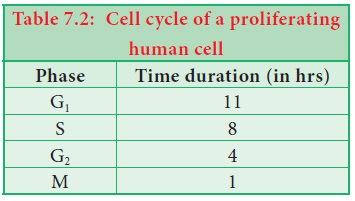 The different phases of cell cycle are as follows (Figure 7.1). 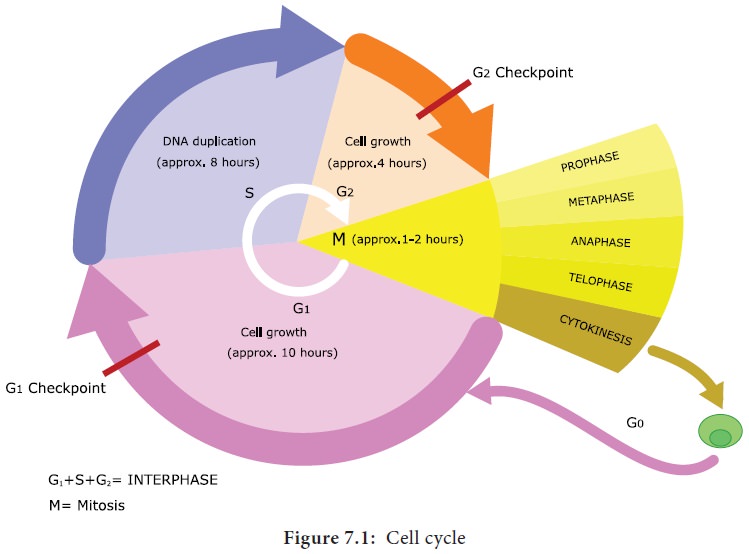 Longest part of the cell cycle, but it is of extremely variable length. At first glance the nucleus appears to be resting but this is not the case at all. The chromosomes previously visible as thread like structure, have dispersed. Now they are actively involved in protein synthesis, at least for most of the interphase.

C- Value is the amount in picograms of DNA contained within a haploid nucleus.

The first gap phase – 2C amount of DNA in cells of G1. The cells become metabolically active and grows by producing proteins, lipids, carbohydrates and cell organelles including mitochondria and endoplasmic reticulum. Many checkpoints control the cell cycle.

The checkpoint called the restriction point at the end of G1, determines a cells fate whether it will continue in the cell cycle and divide or enter a stage called G0 as a quiescent stage and probably as specified cell or die. Cells are arrested in G1 due to:

Biochemicals inside cells activates the cell division. The proteins called kinases and cyclins activate genes and their proteins to perform cell division. Cyclins act as major checkpoint which operates in G1 to determine whether or not a cell divides.

Some cells exit G1 and enters a quiescent stage called G0, where the cells remain metabolically active without proliferation. Cells can exist for long periods in G0 phase. In G0 cells cease growth with reduced rate of RNA and protein synthesis. The G0 phase is not permanent . Mature neuron and skeletal muscle cell remain permanently in G0. Many cells in animals remains in G0 unless called on to proliferate by appropriate growth factors or other extracellular signals. G0 cells are not dormant.

Growth of the cell continues as replication of DNA occur, protein molecules called histones are synthesised and attach to the DNA. The centrioles duplicate in the cytoplasm. DNA content increases from 2C to 4C.

One of the proteins synthesized only in the G2 period is known as Maturation Promoting Factor (MPF). It brings about condensation of interphase chromosomes into the mitotic form.