Amitosis  is also called direct or incipient cell division. Here there is no spindle formation and chromatin material does not condense. It consist of two steps: (Figure 7.2).

•            Nucleus develops a constriction at the center and becomes dumbell shaped.

•            It deepens centripetally and finally divides the cell into two cells.

(a)     Causes unequal distribution of chromosomes.

(b)    Can lead to abnormalities in metabolism and reproduction.

The most important part of cell division concerns events inside the nucleus. Mitosis occurs in shoot and root tips and other meristematic tissues of plants associated with growth. The number of chromosomes in the parent and the daughter (Progeny) cells remain the same so it is also called as equational division.

In closed mitosis, the nuclear envelope remains intact and chromosomes migrate to opposite poles of a spindle within the nucleus (Figure 7.3).

Example: Many single celled eukaryotes including yeast and slime molds. 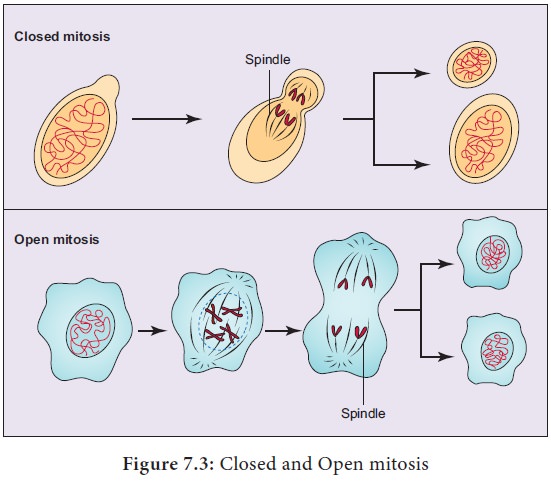 In open mitosis, the nuclear envelope breaks down and then reforms around the 2 sets of separated chromosome.

Example: Most plants and animals

Some animals are able to regenerate the whole parts of the body.

In animal cell the centrioles extend a radial array of microtubules (Figure 7.4) towards the plasma membrane when they reach the poles of the cell. This arrangement of microtubules is called an aster. Plant cells do not form asters.

Chromosomes (two sister chromatids) are attached to the spindle fibres by kinetochore of the centromere. The spindle fibres is made up of tubulin. The alignment of chromosome into compact group at the equator of the cell is known as metaphase plate. This is the stage where the chromosome morphology can be easily studied. 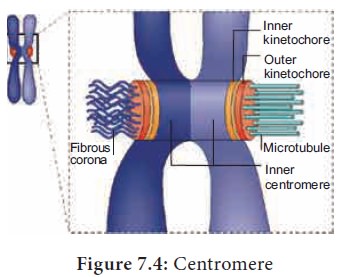 Kinetochore is a DNA–Protein complex present in the centromere DNA where the microtubules are attached. It is a trilaminar disc like plate.

The spindle assembly checkpoint which decides the cell to enter anaphase. 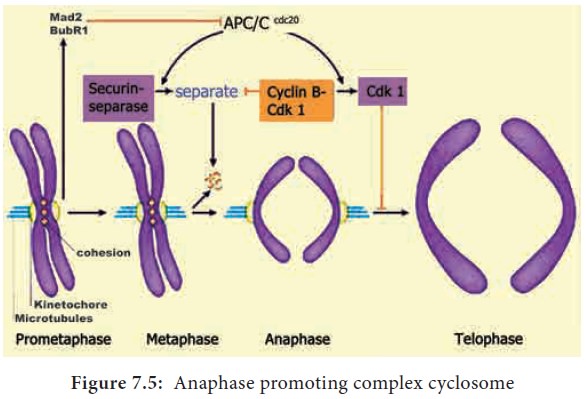 A ubiquitine ligase is activated called as the anaphase-promoting complex cyclosome (APC/C) leads to degradation of the key regulatory proteins at the transition of metaphase to anaphase.

APC is a cluster of proteins that induces the breaking down of cohesion proteins which leads to the separation of chromatids during mitosis (Figure 7.5).

Two sets of daughter chromosomes reach opposite poles of the cell, mitotic spindle disappears. Division of genetic material is completed after this karyokinesis, cytokinesis (division of cytoplasm) is completed, nucleolus and nuclear membranes reforms. Nuclear membranes form around each set of sister chromatids now called chromosomes, each has its own centromere. Now the chromosomes decondense. In plants, phragmoplast are formed between the daughter cells. Cell plate is formed between the two daughter cells, reconstruction of cell wall takes place. Finally the cells are separated by the distribution of organelles, macromolecules into two newly formed daughter cells.

A Culture of animal cells in which the cell cycles were asynchronous was incubated with 3H-Thymidine for 10 minutes. Autoradiography showed that 50% of the cells were labelled. If the cell cycle time (generation time) was 16 hrs how long was the S period?

Phragmoplast contains microtubules, actin filaments and vesicles from golgi apparatus and ER. The golgi vesicles contains carbohydrates such as pectin, hemicellulose which move along the microtubule of the pharagmoplast to the equator fuse, forming a new plasma membrane and the materials which are placed their becomes new cell wall. The first stage of cell wall construction is a line dividing the newly forming cells called a cell plate. The cell plate eventually stretches right across the cell forming the middle lamella. Cellulose builds up on each side of the middle lamella to form the cell walls of two new plant cells. 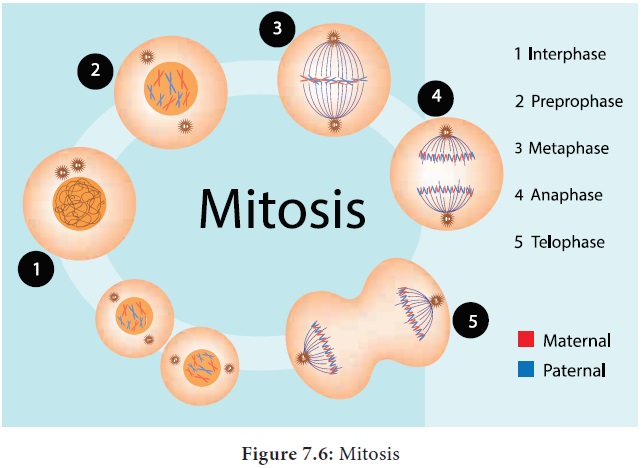 Exact copy of the parent cell is produced by mitosis (genetically identical).

2.        Growth – as multicellular organisms grow, the number of cells making up their tissue increases. The new cells must be identical to the existing ones.

3.        Repair of tissues - damaged cells must be replaced by identical new cells by mitosis.

5.        In flowering plants, structure such as bulbs, corms, tubers, rhizomes and runners are produced by mitotic division. When they separate from the parent, they form a new individual.

The production of large numbers of offsprings in a short period of time, is possible only by mitosis. In genetic engineering and biotechnology, tissues are grown by mitosis (i.e. in tissue culture).

In Greek meioum means to reduce. Meiosis is unique because of synapsis, homologous recombination and reduction division. Meiosis takes place in the reproductive organs. It results in the formation of gametes with half the normal chromosome number.

In flowering plants meiosis occurs during microsporogenesis in anthers and megasporogenesis in ovule. In contrast to mitosis, meiosis produces cells that are not genetically identical. So meiosis has a key role in producing new genetic types which results in genetic variation.

Meiosis can be studied under two divisions i.e., meiosis I and meiosis II. As with mitosis, the cell is said to be in interphase when it is not dividing.

Prophase I is the longest and most complex stage in meiosis. Pairing of homologous chromosomes (bivalents).

Prophase I – Prophase I is of longer duration and it is divided into 5 substages – Leptotene, Zygotene, Pachytene, Diplotene and Diakinesis (Figure 7.7).

Pachytene – At this stage bivalent chromosomes are clearly visible as tetrads. Bivalent of meiosis I consists of 4 chromatids and 2 centromeres. Synapsis is completed and recombination nodules appear at a site where crossing over takes place between non-sister chromatids of homologous chromosome. Recombination of homologous chromosomes is completed by the end of the stage but the chromosomes are linked at the sites of crossing over. This is mediated by the enzyme recombinase.

Diplotene – Synaptonemal complex disassembled and dissolves. The homologous chromosomes remain attached at one or more points where crossing over has taken place. These points of attachment where ‘X’ shaped structures occur at the sites of crossing over is called Chiasmata. Chiasmata are chromatin structures at sites where recombination has been taken place. They are specialised chromosomal structures that hold the homologous chromosomes together. Sister chromatids remain closely associated whereas the homologous chromosomes tend to separate from each other but are held together by chiasmata. This substage may last for days or years depending on the sex and organism. The chromosomes are very actively transcribed in females as the egg stores up materials for use during embryonic development. In animals, the chromosomes have prominent loops called lampbrush chromosome.

The random distribution of homologous chromosomes in a cell in Metaphase I is called independent assortment.

In plants, after karyokinesis cytokinesis takes place by which two daughter cells are formed by the cell plate between 2 groups of chromosomes known as dyad of cells (haploid).

The stage between the two meiotic divisions is called interkinesis which is short-lived.

This division is otherwise called mitotic meiosis. Since it includes all the stages of mitotic divisions.

Chromosome arranged at the equatorial plane of the spindle. Microtubules of spindle gets attached to the centromere of sister chromatids. 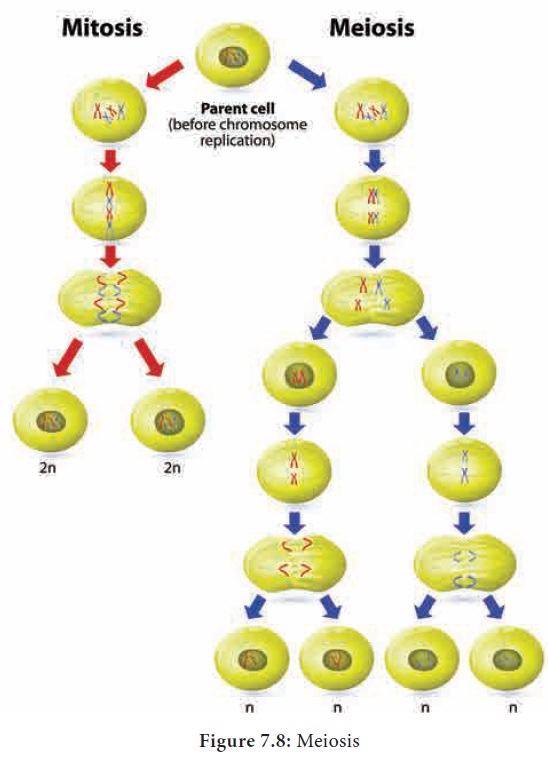 ·           This maintains a definite constant number of chromosomes in organisms.

•            Crossing over takes place and exchange of genetic material leads to variations among species. These variations are the raw materials to evolution. Meiosis leads to genetic variability by partitioning different combinations of genes into gametes through independent assortment. 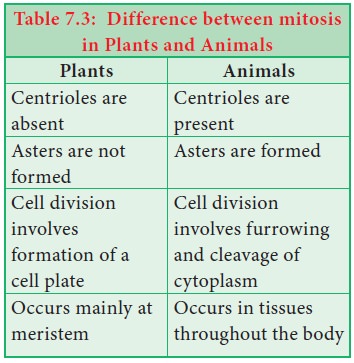 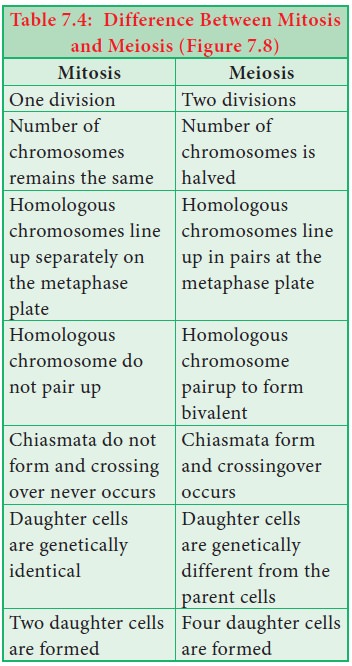