Under the Government of India Act, 1935 provincial autonomy was introduced. This Act came into force in 1937. In the provinces where the Congress formed its Government, rural development received special attention. It was an essential part of Gandhi’s programme that Panchayat Raj institutions would be built from villages to the highest level.

After Independence, the Gandhian ideal of Grama Swaraj (Village Republic) greatly influenced the constitution makers. India being the land of villages, the creation of village panchayats became a social movement. Restoration of panchayats has become an article of faith during our freedom struggle. Hence with the dawn of independence and framing of the constitution of India, Article 40 was incorporated in the constitution which reads as: “the State should take steps to organise village panchayats and endow them with such powers and authority as may be necessary to enable them to function as the units of self Governments.”

Lord Ripon was the one who gave Indians the first taste of freedom by introducing the Local Self Government in 1882.

Ripon took some steps towards liberalizing the administration in India. He formulated the local self government and made it clear that he was advocating for the decentralization of administration. 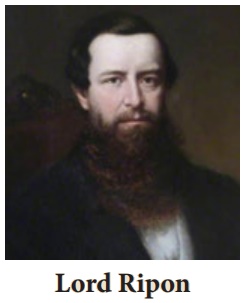 He tried to remove obstacles in the sphere of Local Self government by his resolution of 1882. He led a series of enactments in which larger powers of the local self-government were given to the rural and urban bodies and the elected people received wider rights.