The pelvic girdle (or pelvic bone) consists of the two hip bones (coxae or innominate bones), which articu-late with the axial skeleton at the sacrum.

THE HIP AND LEG

The pelvic girdle (or pelvic bone) consists of the two hip bones (coxae or innominate bones), which articu-late with the axial skeleton at the sacrum. Each hip bone has three major parts: the ilium, ischium, and pubis, and these are shown in Fig. 6–13, which depicts both a male and a female pelvis. The ilium is the flared, upper portion that forms the sacroiliac joint. The ischium is the lower, posterior part that we sit on. The pubis is the lower, most anterior part. The two pubic bones articulate with one another at the pubic symphysis, with a disc of fibrous cartilage between them. Notice the pubic angle of both the male and female pelvises in Fig. 6–13. The wider female angle is an adaptation for childbirth, in that it helps make the pelvic outlet larger. 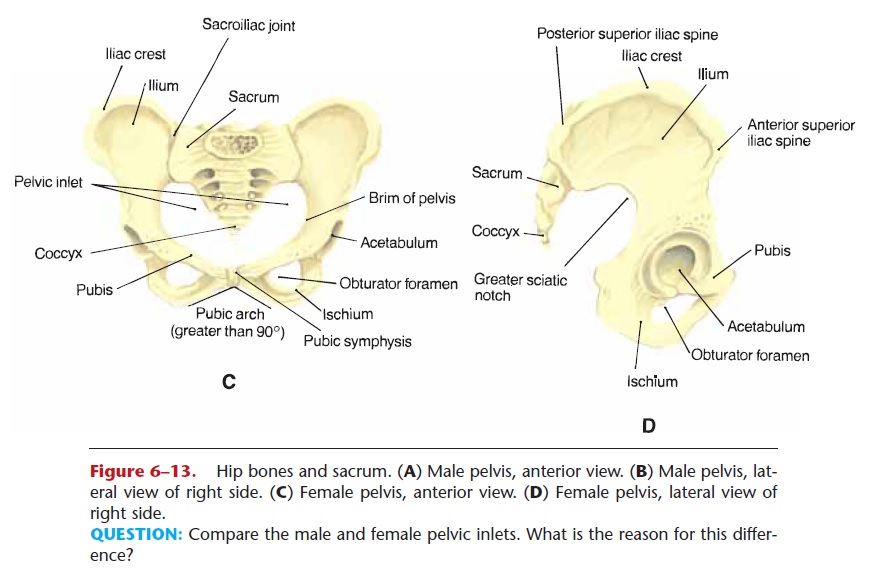 QUESTION: Compare the male and female pelvic inlets. What is the reason for this differ-ence?

The acetabulum is the socket in the hip bone that forms a ball-and-socket joint with the femur. Compared to the glenoid fossa of the scapula, the acetabulum is a much deeper socket. This has great functional importance because the hip is a weight-bearing joint, whereas the shoulder is not. Because the acetabulum is deep, the hip joint is not easily dislo-cated, even by activities such as running and jumping (landing), which put great stress on the joint.

The femur is the long bone of the thigh. As men-tioned, the femur forms a very movable ball-and-socket joint with the hip bone. At the proximal end of the femur are the greater and lesser trochanters, large projections that are anchors for muscles. At its distal end, the femur forms a hinge joint, the knee, with the tibia of the lower leg. Notice in Fig. 6–14 that each bone has condyles, which are the rounded projections that actually form the joint. The patella, or kneecap, is anterior to the knee joint, enclosed in the tendon of the quadriceps femoris, a large muscle group of the thigh. 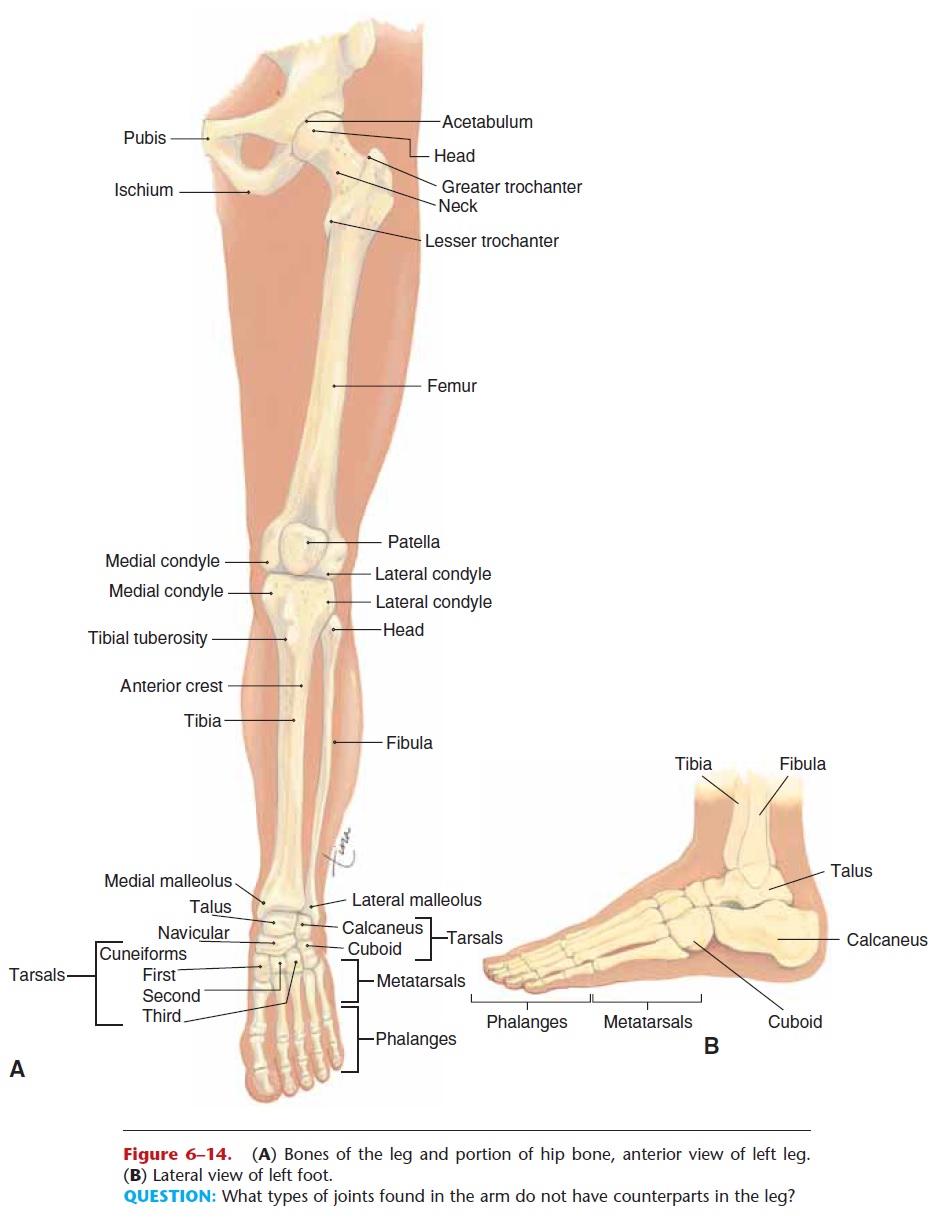 Figure 6–14. (A) Bones of the leg and portion of hip bone, anterior view of left leg. (B) Lateral view of left foot.

QUESTION: What types of joints found in the arm do not have counterparts in the leg?

The tibia is the weight-bearing bone of the lower leg. You can feel the tibial tuberosity (a bump) and anterior crest (a ridge) on the front of your own leg. The medial malleolus, what we may call the “inner ankle bone,” is at the distal end. Notice in Fig. 6–14 that thefibula is not part of the knee joint and does not bear much weight. The lateral malleolus of the fibula is the “outer ankle bone” you can find just above your foot. Though not a weight-bearing bone, the fibula is important in that leg muscles are attached and anchored to it, and it helps stabilize the ankle. Two bones on one is a much more stable arrangement than one bone on one, and you can see that the malleoli of the tibia and fibula overlap the sides of the talus. The tibia and fibula do not form a pivot joint as do the radius and ulna in the forearm; this also contributes to the stability of the lower leg and foot and the support of the entire body.

The tarsals are the seven bones in the ankle. As you would expect, they are larger and stronger than the carpals of the wrist, and their gliding joints do not provide nearly as much movement. The largest is the calcaneus, or heel bone; the talus transmits weightbetween the calcaneus and the tibia. Metatarsals are the five long bones of each foot, and phalanges are the bones of the toes. There are two phalanges in the big toe and three in each of the other toes. The pha-langes of the toes form hinge joints with each other. Because there is no saddle joint in the foot, the big toe is not as movable as the thumb. The foot has two major arches, longitudinal and transverse, that are supported by ligaments. These are adaptations for walking completely upright, in that arches provide for spring or bounce in our steps. Important parts of hip and leg bones are described in Table 6–4. 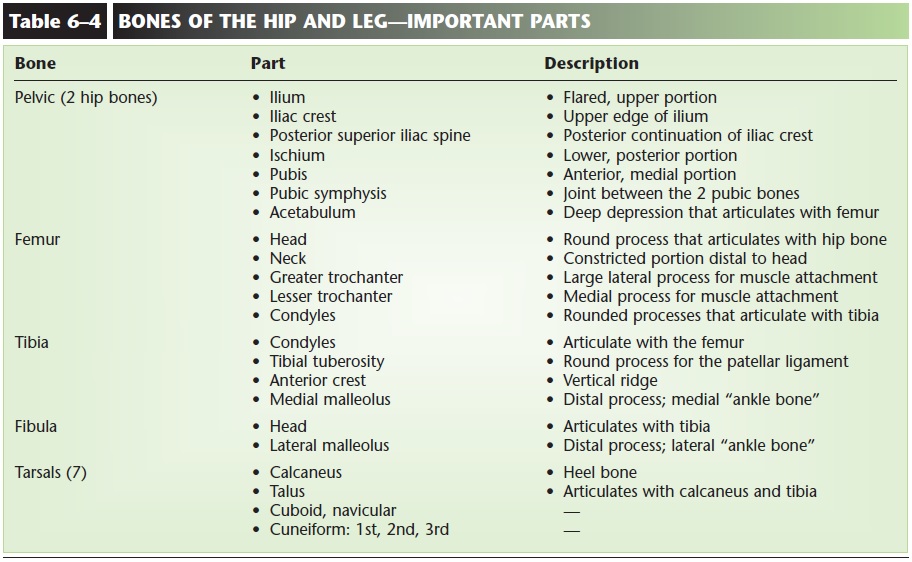