A clause is a group of words that contains both a subject and a predicate (or a verb). There are two types of clauses. They are independent clause and dependent clause.

* Kalpana wants to buy a phone, but she does not have enough money.

* If you don't study well, you won't pass the exam.

* Kavin bought a car which was too expensive.

* Sanjai is a talented player though he is out of form.

Independent Clauses also known as main clauses are complete sentences. They can stand alone and express a complete thought.

I need a book.

Ram is a good volleyball player.

Dependent Clauses also known as subordinate clauses contain a subject and a predicate, but they do not express a complete thought.

When it is raining

Because you were late

After you go to school

There are three main types of Dependent clauses: Adjective, Adverb and Noun.

An Adjective Clause describes or gives more information about a noun—tells us which one, what kind, or how many.

Example: The book that I left on the bus belongs to Mr. Baskar.

An Adverb Clause describes or gives more information about the verb—tells us when, where, how, to what extent, or under what condition something is happening.

Example: She was happy because her father gave her a watch.

A Noun Clause takes the place of a noun in the sentence.

Example: This is the best route that I know.

A Phrase is a group of words that forms a meaningful unit, but it is not a complete sentence. In other words, it does not have a subject or a verb.

The red umbrella was blown away in the wind.

There are several kinds of phrases in the English language. Some of thecommon ones are described below.

A Noun Phrase is a group of words made up of a noun and its modifiers.

The pink house is for sale.

Verb phrase is a group of words made up of a verb, helping verbs, and modifiers.

You have woken up everyone in the house

A Prepositional Phrase is a group of words that begin with a preposition and help to explain the relationship between two things.

The present inside the big box is mine.

A. Identify the dependent clauses or phrases in the following sentences and underline them.

1. Texting on his phone, the man swerved into a ditch.

2. It isn’t necessary to cram all night if you have studied a little each day.

3. We climbed up the hill to enjoy the view.

4. I enjoy painting during my holidays.

5. Whether he attends the party or not, I have decided to go.

6. I will stop playing the drums when you go to sleep.

1. Texting on his phone, the man swerved into a ditch.

2. It isn’t necessary to cram all night if you have studied a little each day. (Dependent clause)

3. We climbed up the hill to enjoy the view. (Phrase)

4. I enjoy painting during the holidays (Phrase)

5. Whether he attends the party or not, I have decided to go. (Dependent clause)

6. I will stop playing the drums when you go to sleep. (Dependent clause)

a) In spite of

c) In spite on

c) In case with

a) in behalf of

b) on behalf of

a) by means of

c) by means to

A non-finite verb (also known as a verbal) is the term used to describe a verb that does not indicate tense. The non-finite verbs are called gerunds, infinitives, and par-ticiples.

A verb that indicates tense and changes according to the subject

Finite verbs change tense and number according to the subject.

Her friends presented the girl with a toy.

His friend presented a watch.

Non-finite verbs have no subject and do not change according to the tense or number.

C. Look at the action words in bold. Identify whether they are either finite or non-finite verb.

They want to try a new approach. Answer: to try (Non-finite)

Having tried everything , he gave up. Answer: having tried (Non-finite)

All I can do is try. Answer: try (Non-finite)

If she tried, she would succeed. Answer: tried (Finite)

The infinitive is often called as ‘to verb’ 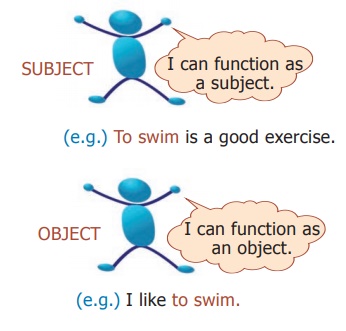 We use plain/bare infinitives with these modals.

The infinitive may function as a subject, direct object, subject complement, adjective, or adverb in a sentence. Although an infinitive is easy to locate because of the to+verb form, deciding what function it has in a sentence depends on the meaning.

(e.g.)  His ambition is to fly. (subject complement)

(e.g.)  He lacked the strength to resist. (adjective)

* The study abroad program might satisfy your desire for new experiences.

* They do not appreciate my singing.

* They do not appreciate my assistance.

* My cat’s favourite activity is sleeping.

* My cat’s favourite food is salmon.

Identify the object of the preposition.

* The police arrested him for speeding.

* The police arrested him for criminal activity.

A Gerund phrase consists of a gerund plus modifier(s), object(s), and/or complement(s).

Dinesh and Divya have been assigned homework on non-finites. They are not sure when to use a gerund and when to use an infinitive.The decide to meet their teacher and get their doubts cleared. The teacher introduces them to Mr. Gerund and Ms. Infinitive.\