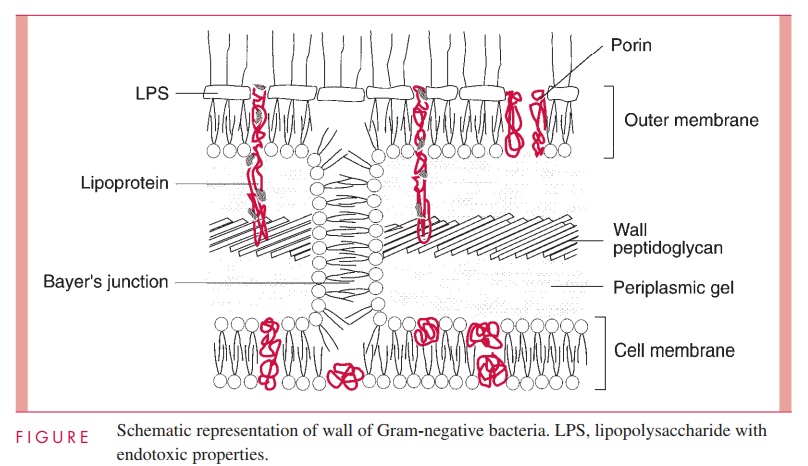 The second kind of cell wall found in bacteria, the Gram-negative cell wall.

The second kind of cell wall found in bacteria, the Gram-negative cell wall, is depicted in Figure 2 – 9. Except for the presence of murein, there is little chemical resemblance to cell walls of Gram-positive bacteria, and the architecture is fundamentally different. In Gram-negative cells, the amount of murein has been greatly reduced, with some of it forming a single-layered sheet around the cell and the rest forming a gel-like substance, the periplasmic gel, with little cross-linking. External to this periplasm is an elaborate outer membrane. 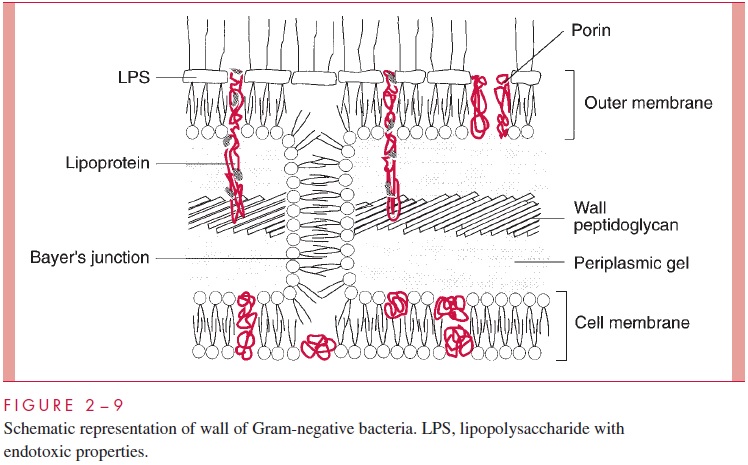 Historically, the cell wall was regarded as the structure external to the cell membrane (excluding the capsule), and for Gram-positive bacteria this conception is certainly appro-priate. Examination of Figures 2 – 5 and 2 – 9 shows the dilemma in applying the same term to the Gram-negative envelope. There is some reason to apply the same definition used for the Gram-positive situation, in which case the cell wall of Gram-negative bacte-ria consists of periplasm with its murein sac plus the outer membrane. This convention is used in Table 2 – 1. An alternative convention is to consider that the cell wall of Gram-negative bacteria is simply the structure chemically most like the Gram-positive wall, namely, the thin murein sac, with perhaps its attendant periplas-mic gel. The student will quickly realize the underlying truth that cell wall is not a very satisfying term. Some microbiologists use cell envelope and envelope layers and avoid using the term cell wall altogether for Gram-negative bacteria. 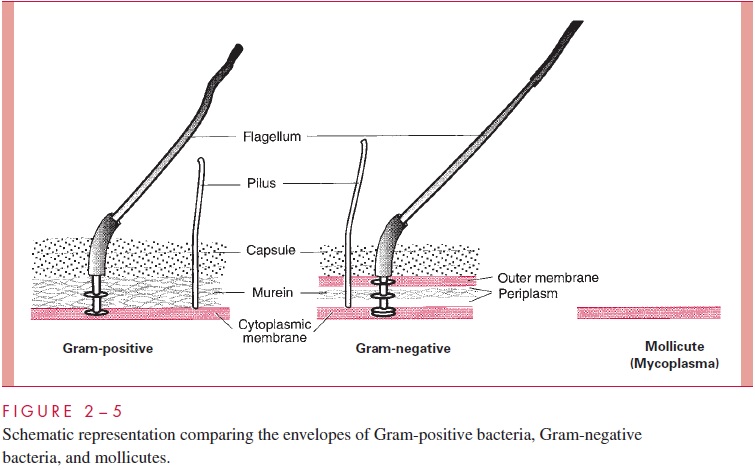 Earlier electron micrographs had suggested that the small amount of murein in Gram-negative cells, such as Escherichia coli, formed a single sheet around the cell, and that this murein sac was floating in a space, the periplasmic space, containing a fairly concen-trated solution of proteins and oligosaccharides. Recent evidence modifies this picture and indicates that the “space” is a gel formed by murein peptidoglycan chains with little or no cross-linking.

Whatever its precise nature, the periplasm contains a murein sac, with a unit peptido-glycan structure quite similar to that in Gram-positive cells. Despite its reduced extent in the Gram-negative wall, the murein sac still is responsible for the shape of the cell and is vital for its integrity. As in the case of Gram-positive cells, removing or damaging the peptidoglycan layer leads to cell lysis. If the cells are protected from osmotic lysis dur-ing lysozyme or penicillin treatment, they assume a spherical shape. Because such spheres cannot be totally stripped of wall material, they are called spheroplasts, in con-trast to the protoplasts formed from Gram-positive cells. Spheroplasts of some species can multiply.

The proteins in solution in the periplasm consist of enzymes with hydrolytic functions (such as alkaline phosphatase), sometimes antibiotic-inactivating enzymes, and various binding proteins with roles in chemotaxis and in the active transport of solutes into the cell . Oligosaccharides secreted into the periplasm in response to external conditions serve to create an osmotic pressure buffer for the cell.

The periplasm is an intermembrane structure, lying between the cell membrane (dis-cussed later) and a special membrane unique to Gram-negative cells, the outer membrane. This has an overall structure similar to most biological membranes with two opposing phospholipid – protein leaflets. However, in terms of its composition, the outer membrane is unique in all biology. Its inner leaflet consists of ordinary phospholipids, but these are replaced in the outer leaflet by a special molecule called lipopolysaccharide (LPS), which is extremely toxic to humans and other animals, and is called an endotoxin. Even in minute amounts, such as the amount released to the circulation during the course of a Gram-negative infection, this substance can produce a fever and shock syndrome calle Gram-negative shock, or endotoxic shock.

LPS consists of a toxic lipid A (a phospholipid containing glucosamine rather than glycerol), a core polysaccharide (containing some unusual carbohydrate residues and fairly constant in structure among related species of bacteria), and O antigen polysac-charide side chains (Fig 2 – 10). The last component constitutes the major surface anti-gen of Gram-negative cells (which, it is recalled, lack teichoic acids). 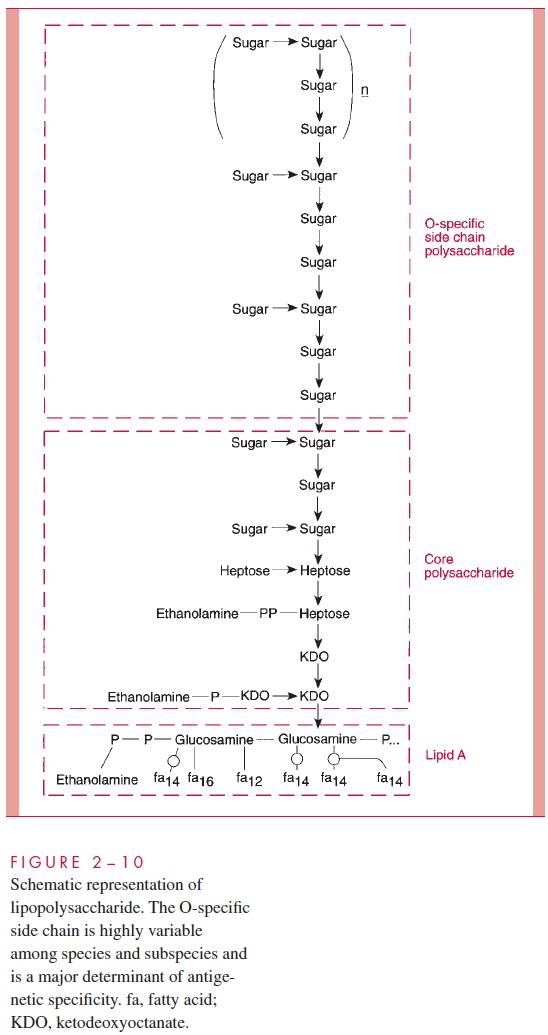 The presence of LPS in the outer leaflet of the outer membrane results in the cover-ing of Gram-negative cells by a wall that should block the passage of virtually every organic molecule into the cell. Hydrophobic molecules (such as some antibiotics) would be blocked by the hydrophilic layer of O antigen; hydrophilic solutes, including most nutrients, such as sugars and amino acids, would face the barrier created by the lipid portion of the outer membrane.

Clearly this is a trade-off that cannot be made; the Gram-negative cell, for whatever benefit is afforded by possessing a wall with an outer membrane, must make provision for the rapid entry of nutrients. Active transport is part of the solution, and a particular structural feature of the outer membrane contributes another part. Special proteins, called porins ormatrixproteins, form pores through the outer membrane that make it possible for hydrophilicsolute molecules of molecular weight less than about 800 to diffuse through it and into the periplasm.

The outer membrane does not contain the variety of proteins present in the cell membrane, but those that are present are quite abundant. In addition to the porins, there is a protein called Braun’s lipoprotein or murein lipoprotein, which is probably the most abundant outer membrane protein in Gram-negative cells, such as E. coli. This protein is covalently attached at its amino end to a lipid embedded in the outer mem-brane. About one third of these lipoprotein molecules are covalently attached at their carboxyl end to the third amino acid in the murein tetrapeptide. It is believed that this forms the major attachment of the murein layer to the outer membrane of the wall in E. coli (see Fig 2 – 9).

The innermost leaflet may well be contiguous in places with the outermost leaflet of the cell membrane (see Fig 2 – 9), because, at least under the electron microscope, prepa-rations of the outer membrane and the cell membrane can be seen to adhere to each other atzones of adhesion (also called Bayer’s junctions). Other zones of adhesion girding the whole circumference of E. coli and related species have been postulated. Because these annular rings tend to form about the cell division septum, they have been calledperiseptal annuli. Their existence is still being examined.

In evolving a cell wall containing an outer membrane, Gram-negative bacteria have succeeded in (1) creating the periplasm, which holds digestive and protective enzymes and proteins important in transport and chemotaxis; (2) presenting an outer surface with strong negative charge, which is important in evading phagocytosis and the action of complement; and (3) providing a permeability barrier against such dangerous molecules as host lysozyme, β-lysin, bile salts, digestive enzymes, and many antibiotics.