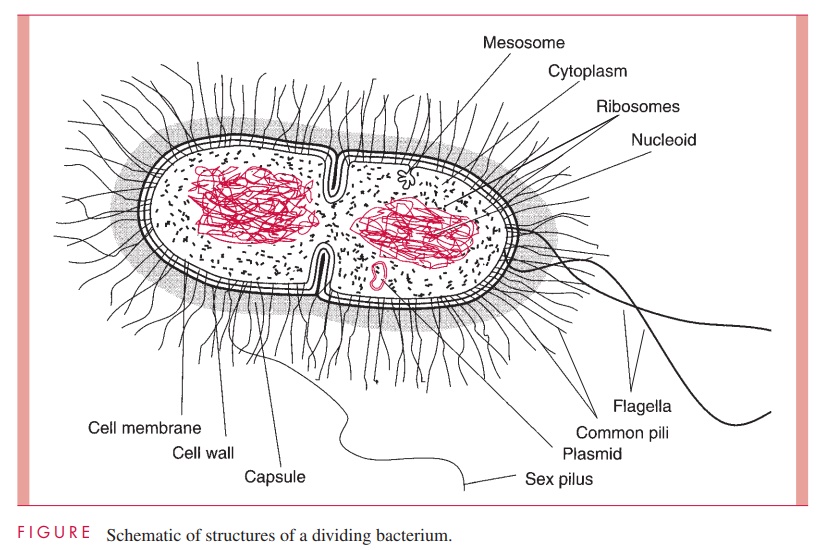 The bacterial cell that is seen today is closer in form to the primordial cells of our planet than is any animal or plant cell.

The bacterial cell that is seen today is closer in form to the primordial cells of our planet than is any animal or plant cell. This similarity is misleading, however, because bacteria are the product of close to 3 billion years of natural selection and have emerged as im-mensely diverse and successful organisms that colonize almost all parts of the world and its other inhabitants. Because bacteria have remained microscopic, it can be concluded that very small size per se is not a disadvantage in nature but rather provides unique opportunities for survival and reproduction. Thus, the first major principle to help us un-derstand bacteria is their small size.

Bacteria are by far the smallest living cells, and some are considered to have the mini-mum possible size for an independently reproducing organism. Individuals of different bacterial species that colonize or infect humans range from 0.1 to 10 μm (1μm 10-6 m) in their largest dimension. Most spherical bacteria have diameters of 0.5 to 2μm, and rod-shaped cells are generally 0.2 to 2μm wide and 1 to 10μm long. At the lower end of the scale, some bacteria (rickettsias, chlamydia, and mycoplasmas) overlap with the largest viruses (the poxviruses), and at the upper end, some rod-shaped bacteria have a length equal to the diameter of some eukaryotic cells (Fig 2 – 1). As a shorthand approximation, bacteria are sole possessors of the 1-μm size. 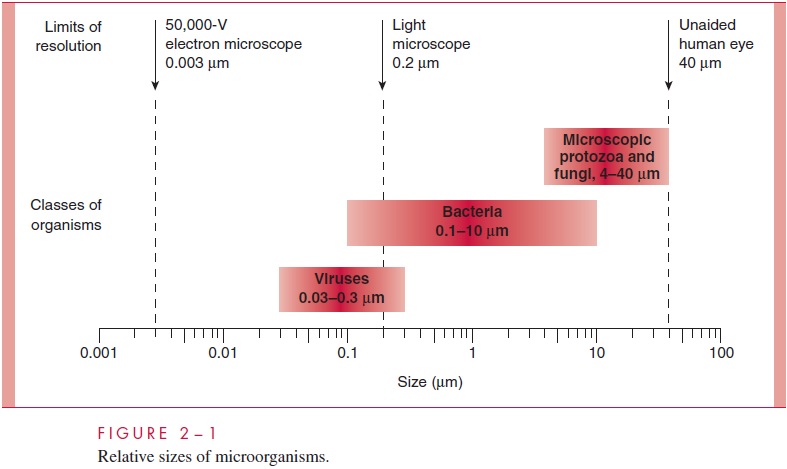 A wealth of structural detail cannot be discerned in bacteria even with the best of light microscopes because of their small size and because they are nearly colorless and trans-parent and have a refractive index similar to that of the surrounding liquid. However, shape can easily be discerned with appropriate microscopic techniques, and distinctive shapes are characteristic of broad groupings of bacteria (Fig 2 – 2). The major forms that can be recognized are spheres, rods, bent or curved rods, and spirals. Spherical or oval bacteria are called cocci (singular: coccus). Rods are called bacilli (singular: bacillus). Very short rods that can sometimes almost be mistaken for cocci are called coccobacilli. Some rod-shaped bacteria have tapered ends and are therefore termed fusiform, whereas others are characteristically club-shaped and may be curved or bent. Spiral-shaped bacte-ria are called spirilla if the cells are rigid andspirochetes if they are more flexible and undulating. 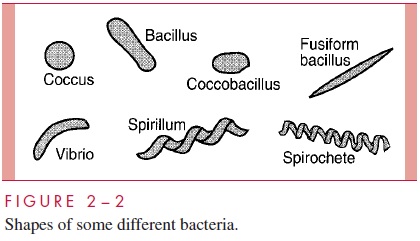 In addition to shape, distinctive arrangements of groups of cells can readily be ob-served for some bacterial genera (Fig 2 – 3). The reason one can speak of arrangements of unicellular organisms is that there is a tendency, varying with different genera, for newly divided cells to stick together. The nature of the aggregates formed depends on the degree of stickiness (which can vary with growth conditions) and on the plane of successive cell divisions. Among the cocci, pairs (diplococci), chains (streptococci), and irregular clus-ters (staphylococci) are found. A few genera of bacteria were named for their distinctive shape or cell arrangement. There are many thousands of species of bacteria, however, so it should be clear that the shape and arrangement of cells cannot be taken far in identify-ing the particular organism in a given sample or culture. A further caution for medical microbiologists is the tendency of some bacteria to take on altered shapes and arrange-ments when in contact with various antimicrobics. 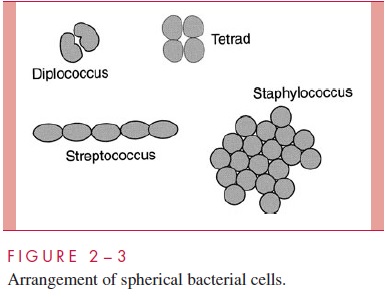 Whatever the overall shape of the cell, the 1-μm size could not accommodate the fa-miliar eukaryotic cell plan. There is insufficient room for mitochondria, nucleus, Golgi apparatus, lysosomes, endoplasmic reticulum, and the like in a cell that is itself only as large as an average mitochondrion. The design of the bacterial cell must thus differ funda-mentally from that of other cells. This is precisely the case, and the unique design is des-ignated prokaryotic.

A generalized bacterial cell is shown in Figure 2 – 4. The major structures of the cell be-long either to the multilayered envelope and its appendages or to the interior core consist-ing of the nucleoid (or nuclear body) and the cytosol (called thus rather than cytoplasm because there is no nucleus; the cytosol is not separated from the genetic material). In con-trast to the alien nature of this body plan, the general chemical nature of the bacterial cell is more familiar to a eukaryotic cell biologist. Greater than 90% of its dry mass consists of five macromolecular-like substances similar to those found in eukaryotes: proteins (about 55% of the dry mass); RNA, consisting of the familiar messenger (mRNA), transfer (tRNA), and ribosomal (rRNA) types (about 20%); DNA (about 3%); carbohydrate (about 5%); and phospholipid (about 6%). 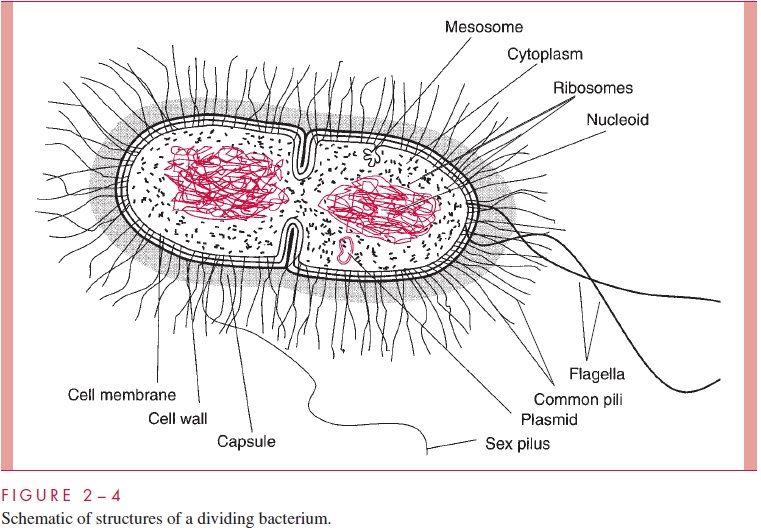 In addition, there are a few macromolecules unique to prokary-otes; a peptidoglycan called murein is found in all walled bacteria, and a few other unique molecules (lipopolysaccharide and teichoic acids) are found in specific groups of bacteria.

As we shall see, small size and extraordinarily simple design help explain the success of bacteria in nature. Small size facilitates rapid exchange of nutrients and metabolic byprod-ucts with the environment, whereas simplicity of design facilitates macromolecular synthe-sis, assembly of cell structures, and formation of new cells by division. Both smallness and simplicity contribute to a distinctive functional property of bacteria — their ability to grow at least an order of magnitude faster than eukaryotic cells. However, at the molecular level, bacteria are far from simple, and it is necessary to learn something of their complexity at this level to understand the ability of some of them to colonize humans or to cause disease.