Glyceraldehyde-3-Phosphate Is Converted to Pyruvate

At this point, a molecule of glucose (a six-carbon compound) that enters the pathway has been converted to two molecules of glyceraldehyde-3-phosphate.

Glyceraldehyde-3-Phosphate Is Converted to Pyruvate

At this point, a molecule of glucose (a six-carbon compound) that enters the pathway has been converted to two molecules of glyceraldehyde-3-phosphate. We have not seen any oxidation reactions yet, but now we shall encounter them. Keep in mind that in the rest of the pathway two molecules of each of the three-carbon compounds take part in every reaction for each original glucose molecule. Figure 17.7 summarizes the second part of the pathway, which is often referred to as the payoff phase of glycolysis, since ATP is produced instead of used in this phase. 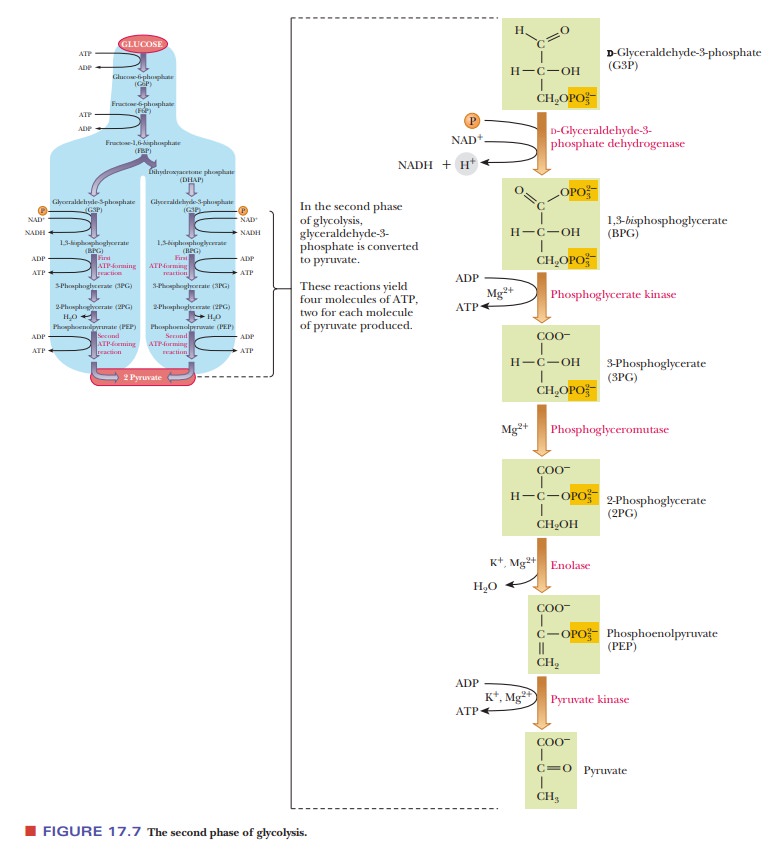 What reactions convert glyceraldehyde-3-phosphate to pyruvate?

Step 6. Glyceraldehyde-3-phosphate is oxidized to 1,3-bisphosphoglycerate.

This reaction, the characteristic reaction of glycolysis, should be looked at more closely. It involves the addition of a phosphate group to glyceraldehyde- 3-phosphate as well as an electron-transfer reaction, from glyceraldehyde-3- phosphate to NAD+. We will simplify the discussion by considering the two parts separately.

The half reaction of oxidation is that of an aldehyde to a carboxylic acid group, in which water can be considered to take part in the reaction.

The half reaction of reduction is that of NAD+ to NADH.

The overall redox reaction is thus

in which R indicates the portions of the molecule other than the aldehyde and carboxylic acid groups, respectively. The oxidation reaction is exergonic under standard conditions (  ∆G°' = –43.1 kJ mol–1 = –10.3 kcal mol–1), but oxidation is only part of the overall reaction.

The phosphate group that is linked to the carboxyl group does not form an ester, since an ester linkage requires an alcohol and an acid. Instead, the car- boxylic acid group and phosphoric acid form a mixed anhydride of two acids by loss of water, 3-Phosphoglycerate + Pi - > 1,3-bisphosphoglycerate + H2O in which the substances involved in the reaction are in the ionized form appropriate at pH 7. Note that ATP and ADP do not appear in the equation. The source of the phosphate group is phosphate ion itself, rather than ATP. The phosphorylation reaction is endergonic under standard conditions (  ∆G°' = 49.3 kJ mol–1 = 11.8 kcal mol–1).

The overall reaction, including electron transfer and phosphorylation, is

Let’s show the two reactions that make up this reaction. 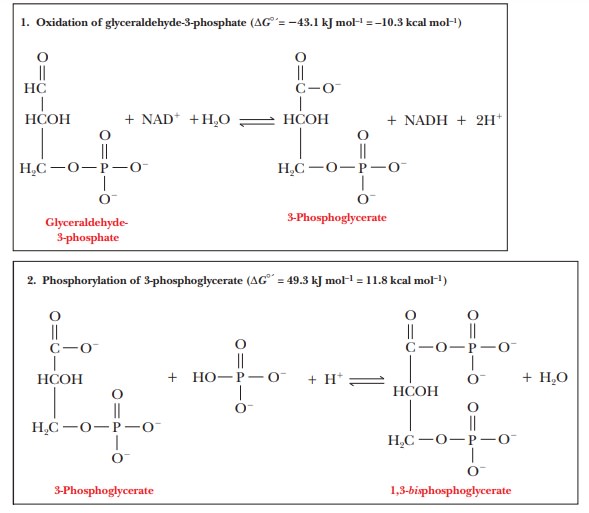 This value of the standard free-energy change is for the reaction of one mole of glyceraldehyde-3-phosphate; the value must be multiplied by 2 to get the value for each mole of glucose ( ∆G°' = 12.4 kJ mol–1 = 3.0 kcal mol–1). The G under cellular conditions is slightly negative (–1.29 kJ mol–1 or –0.31 kcal mol–1) (Table 17.1). The enzyme that catalyzes the conversion of glyceraldehyde-3-phosphate to 1,3-bisphosphoglycerate is glyceraldehyde-3-phosphate dehydrogenase. This enzyme is one of a class of similar enzymes, the NADH-linked dehydrogenases. The structures of a number of dehydrogenases of this type have been studied via X-ray crystallography. The overall structures are not strikingly similar, but the structure of the binding site for NADH is quite similar in all these enzymes (Figure 17.8). (The oxidizing agent is NAD+; both oxidized and reduced forms of the coenzyme bind to the enzyme.) One portion of the binding site is specific for the nicotinamide ring, and one portion is specific for the adenine ring. 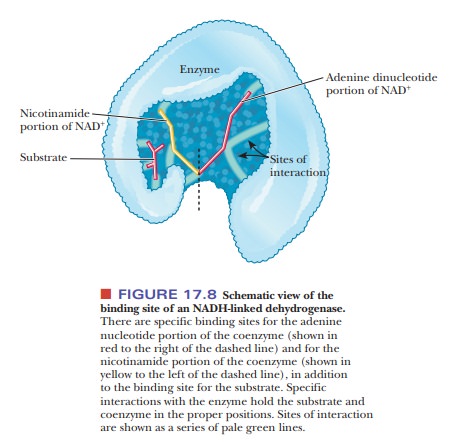 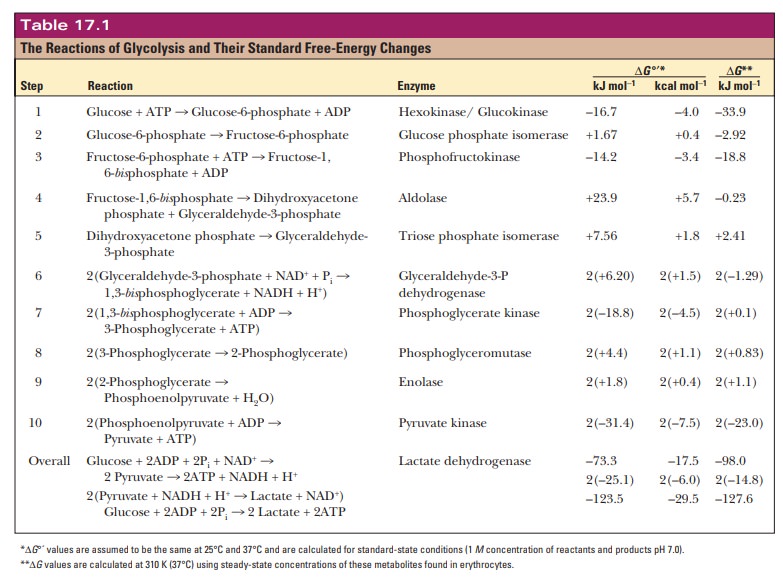 The molecule of glyceraldehyde-3-phosphate dehydrogenase is a tetramer, consisting of four identical subunits. Each subunit binds one molecule of NAD+, and each subunit contains an essential cysteine residue. A thioester involving the cysteine residue is the key intermediate in this reaction. In the phosphoryla-tion step, the thioester acts as a high-energy intermediate. 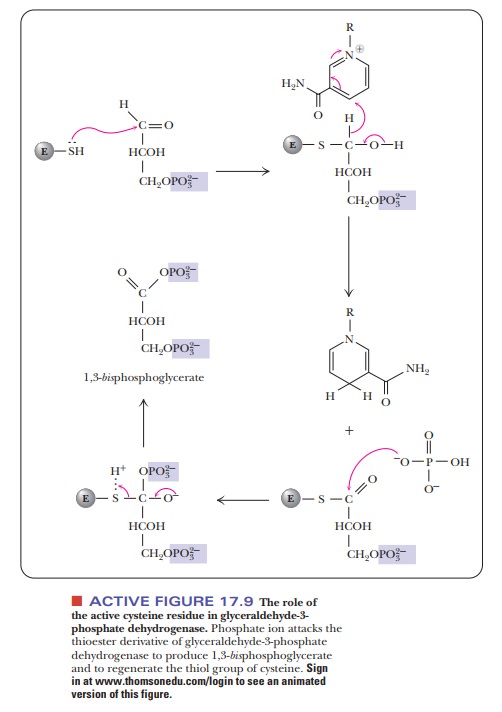 Phosphate ion attacks the thioester, forming a mixed anhydride of the carboxylic and phosphoric acids, which is also a high-energy compound (Figure 17.9). This compound is 1,3-bisphosphoglycerate, the product of the reaction. Production of ATP requires a high-energy compound as starting material. The 1,3-bisphosphoglycerate fulfills this requirement and transfers a phosphate group to ADP in a highly exergonic reaction (i.e., it has a high phosphate-group transfer potential).

Step 7.The next step is one of the two reactions in which ATP is produced byphosphorylation of ADP.

The enzyme that catalyzes this reaction is phosphoglycerate kinase. By now the term kinase should be familiar as the generic name for a class of ATP-dependent phosphate-group transfer enzymes. The most striking feature of the reaction has to do with energetics of the phosphate-group transfer. In this step in glycolysis, a phosphate group is transferred from 1,3-bisphosphoglycerate to a molecule of ADP, producing ATP, the first of two such reactions in the gly-colytic pathway. We already mentioned that 1,3-bisphosphoglycerate can easily transfer a phosphate group to other substances. Note that a substrate, namely 1,3-bisphosphoglycerate, has transferred a phosphate group to ADP. This trans-fer is typical of substrate-level phosphorylation. It is to be distinguished from oxidative phosphorylation, in which transfer of phosphate groups is linked to electron-transfer reactions in which oxygen is the ultimate electron acceptor. The only requirement for substrate-level phosphor-ylation is that the standard free energy of the hydrolysis reaction is more nega-tive than that for hydrolysis of the new phosphate compound being formed. Recall that the standard free energy of hydrolysis of 1,3-bisphosphoglycerate is –49.3 kJ mol–1. We have already seen that the standard free energy of hydrolysis of ATP is –30.5 kJ mol–1, and we must change the sign of the free-energy change when the reverse reaction occurs:

The net reaction is

Step 8.The phosphate group is transferred from carbon - > to carbon 2 of theglyceric acid backbone, setting the stage for the reaction that follows.

The enzyme that catalyzes this reaction is phosphoglyceromutase.

Step 9.The 2-phosphoglycerate molecule loses one molecule of water,producing phosphoenolpyruvate. This reaction does not involve electron transfer; it is a dehydration reaction. Enolase, the enzyme that catalyzes this reaction, requires Mg2+ as a cofactor. The water molecule that is eliminated binds to Mg2+ in the course of the reaction.

Phosphoenolpyruvate is a high-energy compound with a high phosphate-group transfer potential. The free energy of hydrolysis of this compound is more negative than that of ATP (–61.9 kJ mol–1 versus –30.5 kJ mol–1, or –14.8 kcal mol–1 versus –7.3 kcal mol–1). The reaction that occurs in this step can be considered to be the sum of the hydrolysis of phosphoenolpyruvate and the phosphorylation of ADP. This reaction is another example of substrate-level phosphorylation.

Pyruvate kinase is the enzyme that catalyzes this reaction. Like phospho-fructokinase, it is an allosteric enzyme consisting of four subunits of two dif-ferent types (M and L), as we saw with phosphofructokinase. Pyruvate kinase is inhibited by ATP. The conversion of phosphoenolpyruvate to pyruvate slows down when the cell has a high concentration of ATP—that is to say, when the cell does not have a great need for energy in the form of ATP.

Where are the control points in the glycolytic pathway?

One of the most important questions that we can ask about any metabolic pathway is, at which points is control exercised? Pathways can be “shut down” if an organism has no immediate need for their products, which saves energy for the organism. In glycolysis, three reactions are control points. The first is the reaction of glucose to glucose-6-phosphate, catalyzed by hexokinase; the second, which is the production of fructose-1,6-bisphosphate, is catalyzed by phosphofructokinase; and the last is the reaction of PEP to pyruvate, catalyzed by pyruvate kinase (Figure 17.10). It is frequently observed that control is exercised near the start and end of a pathway, as well as at points involving key intermediates such as fructose-1,6-bisphosphate. When we have learned more about the metabolism of carbohydrates, we can return to the role of phosphofructokinase and fructose-1,6-bisphosphate in the regulation of several pathways of carbohydrate metabolism. 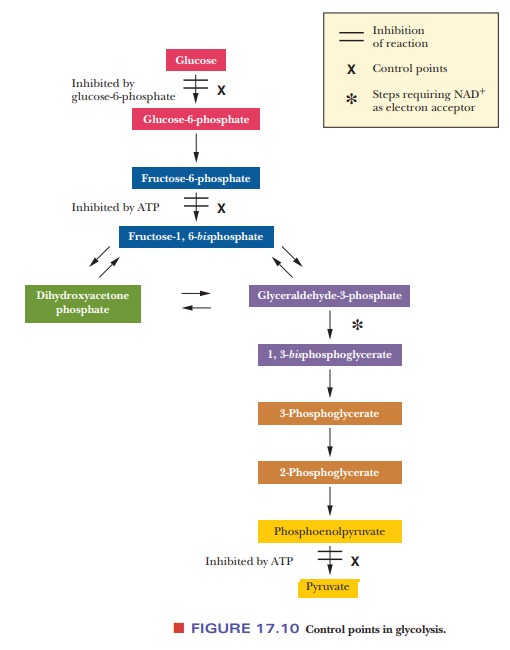 In the final stages of glycolysis, two molecules of pyruvate are produced for each molecule of glucose that entered the pathway.

These reactions involve electron transfer (oxidation–reduction) and the net production of two ATP for each glucose.

There are three control points in the glycolytic pathway.