How does the conversion of pyruvate to lactate take place in muscle? How does alcoholic fermentation take place?

How does the conversion of pyruvate to lactate take place in muscle?

The final reaction of anaerobic glycolysis is the reduction of pyruvate to lactate.

This reaction is also exergonic ( ∆G°' = –25.1 kJ mol–1 = –6.0 kcal mol–1); as before, we need to multiply this value by 2 to find the energy yield for each molecule of glucose that enters the pathway. Lactate is a dead end in muscle metabolism, but it can be recycled in the liver to form pyruvate and even glucose by a pathway called gluconeogenesis (“new synthesis of glucose”).

Lactate dehydrogenase (LDH) is the enzyme that catalyzes this reaction.Like glyceraldehyde-3-phosphate dehydrogenase, LDH is an NADH-linked dehydrogenase and consists of four subunits. There are two kinds of subunits, designated M and H, which vary slightly in amino acid composition. The qua-ternary structure of the tetramer can vary according to the relative amounts of the two kinds of subunits, yielding five possible isozymes. In human skeletal muscle, the homogeneous tetramer of the M4 type predominates, and in the heart the other homogeneous possibility, the H4 tetramer, is the predominant form. The heterogeneous forms—M3H, M2H2, and MH3—occur in blood serum. A very sensitive clinical test for heart disease is based on the existence of the various isozymic forms of this enzyme. The relative amounts of the H4 and MH3 isozymes in blood serum increase drastically after myocardial infarc-tion (heart attack) compared with normal serum. The different isozymes have slightly different kinetic properties due to their subunit compositions. The H4 isozyme (also called LDH 1) has a higher affinity for lactate as a substrate. The M4 isozyme (LDH 5) is allosterically inhibited by pyruvate. These differ-ences reflect the isozymes’ general roles in metabolism. The muscle is a highly anaerobic tissue, whereas the heart is not.

At this point, one might ask why the reduction of pyruvate to lactate (a waste product in aerobic organisms) is the last step in anaerobic glycolysis, a path-way that provides energy for the organism by oxidation of nutrients. There is another point to consider about the reaction, one that involves the relative amounts of NAD+ and NADH in a cell. The half reaction of reduction can be written

and the half reaction of oxidation is

The overall reaction is, as we saw earlier,

The NADH produced from NAD+ by the earlier oxidation of glyceraldehyde-3-phosphate is used up with no net change in the relative amounts of NADH and NAD+ in the cell (Figure 17.11). This regeneration is needed under anaerobic conditions in the cell so that NAD+ will be present for further glycolysis to take place. Without this regeneration, the oxidation reactions in anaerobic organisms would soon come to a halt because of the lack of NAD+ to serve as an oxidizing agent in fermentative processes. The production of lactate buys time for the organism experiencing anaerobic metabolism and shifts some of the load away from the muscles and onto the liver, in which gluconeogenesis can reconvert lactate to pyruvate and glucose. The same considerations apply in alcoholic fermentation (which will be discussed next). On the other hand, NADH is a frequently encountered reducing agent in many reactions, and it is lost to the organism in lactate production. Aerobic metabolism makes more efficient use of reducing agents (“reducing power”) such as NADH because the conversion of pyruvate to lactate does not occur in aerobic metabolism. The NADH produced in the stages of glycolysis leading to the production of pyruvate is available for use in other reactions in which a reducing agent is needed. 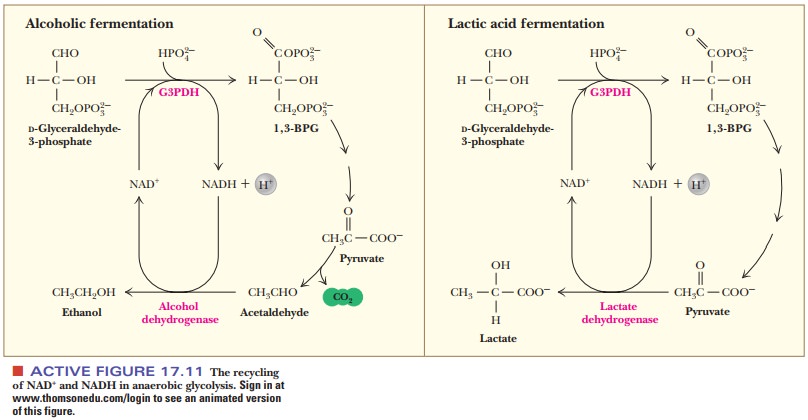 How does alcoholic fermentation take place?

Two other reactions related to the glycolytic pathway lead to the production of ethanol by alcoholic fermentation. This process is one of the alternative fates of pyruvate. In the first of the two reactions that lead to the production of ethanol, pyruvate is decarboxylated (loses carbon dioxide) to produce acetaldehyde. The enzyme that catalyzes this reaction is pyruvate decarboxylase.

This enzyme requires Mg2+ and a cofactor we have not seen before, thiaminepyrophosphate (TPP). (Thiamine itself is vitamin B1.) In TPP the carbon atombetween the nitrogen and the sulfur in the thiazole ring (Figure 17.12) is highly reactive. It forms a carbanion (an ion with a negative charge on a carbon atom) quite easily, and the carbanion, in turn, attacks the carbonyl group of pyruvate to form an adduct. Carbon dioxide splits off, leaving a two-carbon fragment covalently bonded to TPP. There is a shift of electrons, and the two-carbon fragment splits off, producing acetaldehyde (Figure 17.13). The two-carbon fragment bonded to TPP is sometimes called activated acetaldehyde, and TPP can be found in several reactions that are decarboxylations. 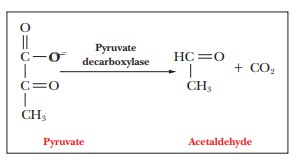 The carbon dioxide produced is responsible for the bubbles in beer and in sparkling wines. Acetaldehyde is then reduced to produce ethanol, and, at the same time, one molecule of NADH is oxidized to NAD+ for each molecule of ethanol produced.

NAD+ and NADH do not appear explicitly in the net equation. It is essential that the recycling of NADH to NAD+ takes place here, just as it does when lactate is produced, so that there can be further anaerobic oxidation. Alcoholdehydrogenase, the enzyme that catalyzes the conversion of acetaldehyde toethanol, is similar to lactate dehydrogenase in many ways. The most striking similarity is that both are NADH-linked dehydrogenases, and both are tetramers. 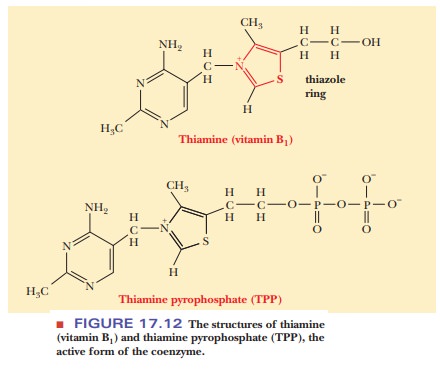 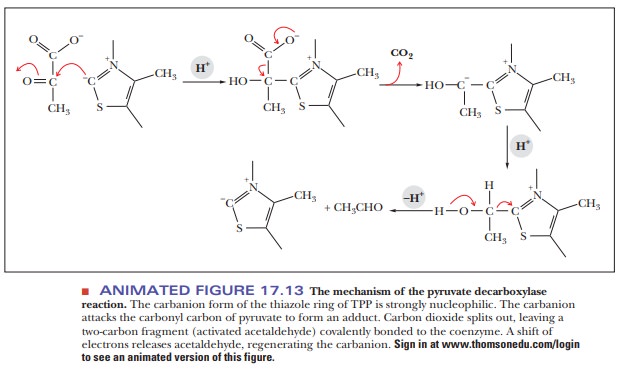 Pyruvate is converted to lactate in anaerobic tissues, such as actively metabolizing muscle. NAD+ is recycled in the process.

In some organisms, pyruvate is converted to ethanol in a process requir-ing thiamine pyrophosphate as a coenzyme.