Genetic Information is Stored in DNA

Microorganisms are diverse in nature. A particular bacterium can be identified based on certain characteristics.

Genetic Information is Stored in DNA

Microorganisms are diverse in nature. A particular bacterium can be identified based on certain characteristics. When a bacterial cell grows and divides, it gives rise to cells with similar characteristics. Have you ever pondered as to why some of the characteristics of progeny cells are similar and a few dissimilar?

In the middle of the 19th century it was assumed that there was some particle present somewhere in the cell which was the controlling factor to carry the characteristics from one generation to another.

Genetics, a branch of science aims to understand the working of the controlling factor. The factor governing the transfer of information is now very well known as Gene. Gene can be defined as a unit of heredity which is transferred from parent to progeny.

Although there were experiments to prove the inheritance pattern due to gene, there was no real understanding of the molecular nature of the gene. Work of Frederick Griffith introduced the transforming principle which was further confirmed as Deoxyribonucleic acid (DNA) by experiments of Avery, Mac Leod and Mac Carty in 1944 followed by Hershey and Chase in 1952.

In 1928, British bacteriologist Frederick Griffith (Figure 14.1) was trying to develop a vaccine against pneumonia. In his experiments Griffith used two related strains of Streptococcus pneumoniae (Figure 14.2). 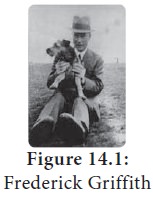 Griffith injected live smooth strain into mice which caused disease and killed it. When he injected live rough strain into mice, it did not cause disease and mice remained alive. He heat killed the smooth strain and injected into mice, the mice remained alive. But the experiment gave surprising results when a mixture of harmless live rough strain and heat-killed smooth strain was injected into mice. Griffith observed that the mice developed pneumonia and died. Further, when he analysed the blood sample from dead mouse, he found that it contained live smooth strain. This accidental discovery made Griffith to conclude that the rough strain changed (transformed) into smooth strain by taking up a substance which he called a “transforming principle” from heat killed smooth bacteria. This phenomenon is called “Bacterial Transformation” Griffith’s experiment is summarized in Figure 14.3. 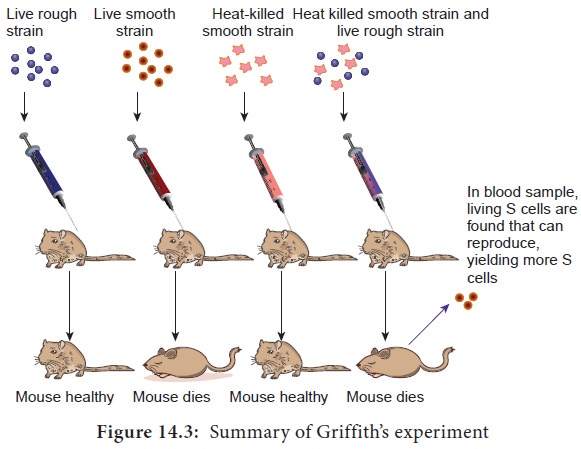 Griffith’s experimental results led to the curiosity to explore the transforming principle. Avery and his colleagues (Figure 14.4) used the extracts of heat-killed smooth bacteria and treated it with enzyme protease, RNase, DNase to eliminate proteins, RNA and DNA respectively. Each of the treated extracts were mixed with live rough bacteria and injected into mice. The mice injected with a mixture of DNase treated extract and live rough strain did not die. This partially proved that DNA was responsible for changing the rough strain of Streptococcus pneumoniae bacteria into smooth bacteria. Avery et al., experiment is summarized in Figure 14.5. Later Hershey and Chase’s experiment on T2 bacteriophage confirmed that genetic information is present in DNA. 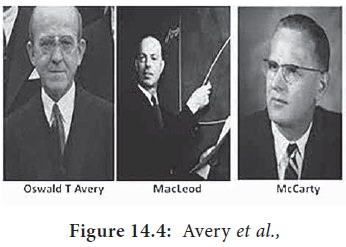 These important early experiments and many other lines of evidence have shown that DNA bears the genetic information of living cells and it is responsible for transfer of characteristics from one generation to another. 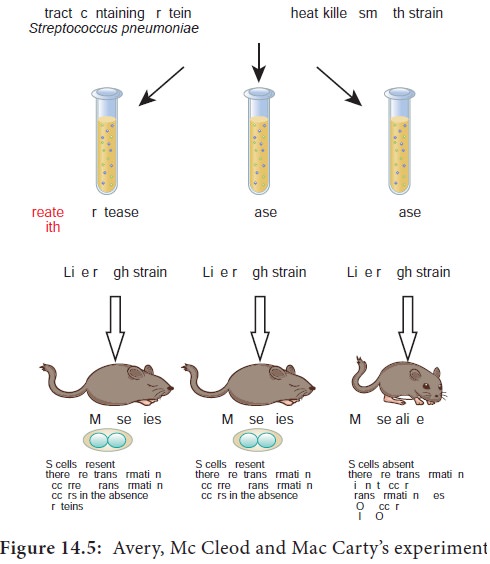 This is true in all organisms, the notable exceptions being RNA viruseswhich store genetic information in RNA. The understanding of DNA’s role in heredity has led to variety of practical applications including forensic analysis, paternity testing and genetic screening.